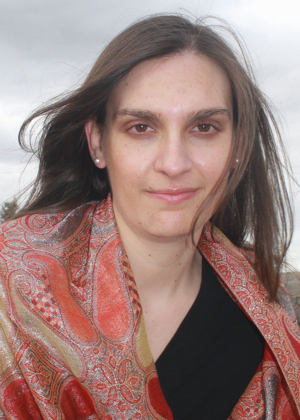 Jocelyn Eikenburg is a writer and blogger who discovered her passion for the written word — as well as her true love — while living and working in China. Her marriage to John/Jun, a Chinese national from Hangzhou, ultimately inspired her to blog about love, family and relationships in China as well as AMWF (Asian Male, Western Female) relationships.

She has been interviewed by the BBC about her blog and cross-cultural marriage and appeared on CCTV (China Central Television). The Wall Street Journal has also featured her site, while other press coverage highlights include the South China Morning Post. You can find her writing in The Wall Street Journal, The Huffington Post, Matador, Asian Jewish Life, and Global Times. Jocelyn has interviewed Celeste Ng (Everything I Never Told You) and Alex Tizon (Big Little Man), two authors with book reviews in The New York Times.

Her essay “Red Couplets” was published in 2013 in the anthology Unsavory Elements alongside some of the biggest names in the China expat literary world including Peter Hessler, Simon Winchester, Michael Meyer, Deborah Fallows, Alan Paul, Susan Conley and Jonathan Watts. The 2014 anthology How Does One Dress to Buy Dragonfruit includes her essay “Huangshan Honeymoon“.

Jocelyn has blogged about topics such as being a yangxifu (the foreign wife of a Chinese man) in China, interracial/cross-cultural relationships (including related stereotypes and racism), AMWF pride, and books and authors that appeal to her readership. To read the best of her work, check out this hand-picked list of her favorite posts.

Yuan Fu is the official English-to-Chinese translator for Speaking of China. A native of Ji’nan, China who studied abroad at Cardiff University, he has always loved languages — and this lifelong passion ultimately moved him to offer his talents to this site. When he’s not racking his brains translating posts, Yuan serves as an audit trainee for an accounting firm in Ji’nan. Someday, he hopes to work for a non-profit organization, have a workshop for creating translations and handcrafted military/building models, and also marry the Western woman of his dreams (ladies, he’s single!).

For any comments or suggestions regarding translations, you’re welcome to contact Yuan at speakingofchina(at)hotmail(dot)com.