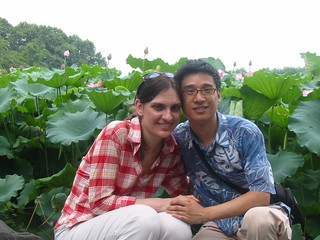 The other day, someone asked me why I started up this blog. I mentioned a number of reasons, including this one — because it’s the kind of blog I wish I had discovered when I first went to China and started dating men over there.

That got me thinking about my first year in China in 1999, when I stumbled into a cross-cultural relationship — and knew little of China’s culture and could barely even speak full sentences in Chinese. I wondered, if I met my 1999 self, what advice would I have given her about dating Chinese men?

Well, here are three things I wish I had known back then:

In the weeks leading up to that first relationship, I was caught in the midst of an “is he into me?” guessing game. As I wrote before:

We spent over a month together in this “dating limbo”. We took late evening walks, our shoulders dangerously close, and he would say things like “I love the color of your eyes” or “I think foreign women are beautiful.” He would also inquire about what I was doing at certain times, or, if we were together, what I would be doing next — and then casually suggest we do something. But it wasn’t until we were crossing the street one day (to escape a beggar running after me) that we finally locked hands together — hands that didn’t part after crossing. Then he kissed me at my apartment, and I knew we were together.

I longed for the reassurance of his words in understanding where we were — and where we were headed — because that’s what people generally do in the US. Of course, once he held my hand and kissed me that evening, I had all the reassurance I needed! Yet when I look back on that time, his actions were saying “I love you” even though he never uttered those words to me.

Later, I had similar experiences in dating — including with my future husband, John. And when I came to know John’s family, I also realized that they show their love, instead of saying it.

2. Keep that past relationship in the past

One of my first arguments with a boyfriend in China happened over something that many Americans think nothing about. I happened to tell him about a relationship with an ex-boyfriend during my senior year in university.

While couples in the US bond over swapping relationship “war stories”, discussing your exes with your Chinese boyfriend could blow up in your face. I’m not saying there aren’t guys in China who might be amenable to such discussions — just realize it’s the usually exception and not the norm. After all, my friend and fellow yangxifu Jessica once told me, “My husband does not want to hear anything about my ex-boyfriends, sexual history, or even ‘regular’ history.”

But on the flip side, it’s kind of liberating to enter a relationship without some unspoken expectation that you should unpack all of your past relationship baggage before your significant other. Some Americans actually judge you over your past relationships, which can obviously sting. Instead, you can leave that past where it belongs and focus on the present happiness.

3. It takes a lot longer to meet the parents

When I was in high school and I started to date guys in the US, they often met my parents on the first or second or even third date. Maybe it was just a handshake and a few quick words of hello, but you could still call it a “meeting”.

Not so in China. With one exception (I met his mom well before we were even considering dating) it took a long time before my boyfriends in China would actually introduce me to their parents. In one case, I never even got to that point — we broke up. Later on, I learned that Chinese usually don’t introduce their boyfriends or girlfriends to the family unless it’s a serious, heading-towards-marriage kind of relationship.

And maybe that’s a good thing. I remember one guy I dated in college and how I came so close to his mom that she even wrote to me while I was studying abroad in Spain. So when he and I finally broke things off, I had a double heartache — losing both him and her.

What about you? What dating advice do you wish you would have had in your first cross-cultural or interracial relationship?