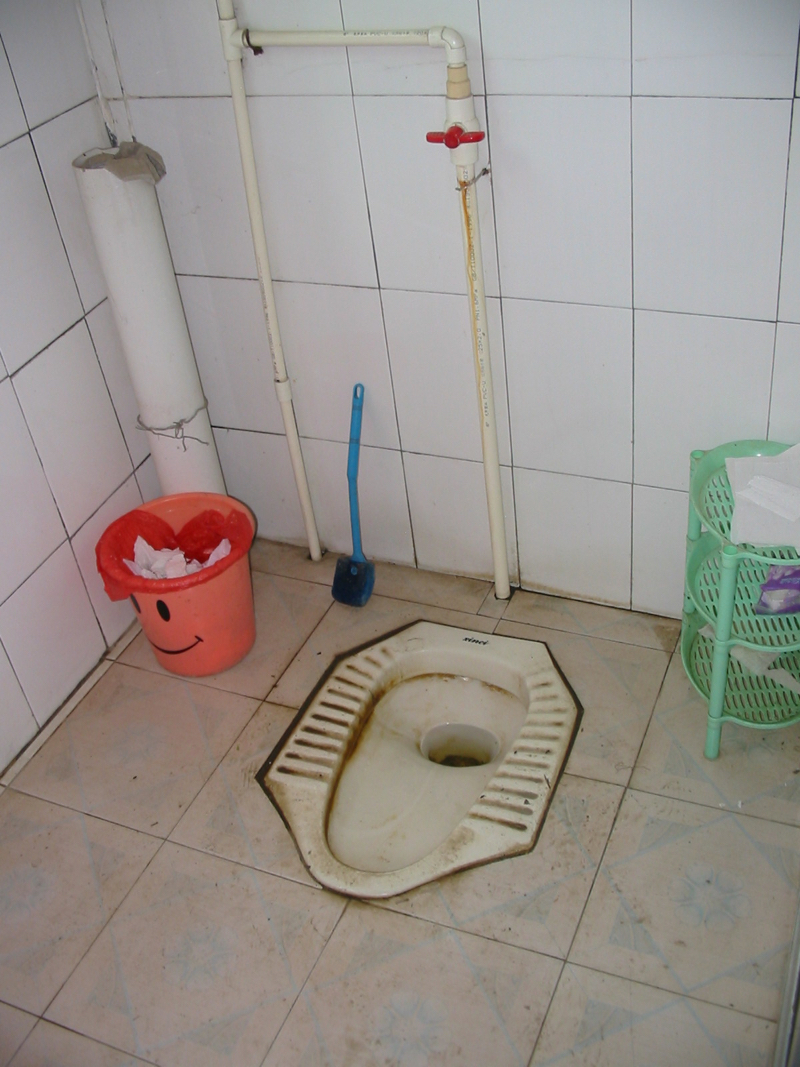 Nobody really asked why that toilet was built before Chinese New Year 2003 — at what would later become my in-laws home. They had always lived without indoor plumbing, instead using a feitong (a large urnlike container) or, for the room, a matong (a small bucket with a top). The feitong and matong made it easy to recycle human waste on their fields, and the whole system had worked just fine.

But then again, they had never hosted a foreign girl (me!) until that Chinese New Year.

That toilet is like many things in Chinese culture, where “I love you” is an unspoken phrase that finds its voice in the sumptuous feasts that fill the dinner table, the hongbao stuffed with crisp, red RMB bills, the boxes of green tea and smoked tofu that friends and relatives forcibly stuff into every last empty corner of your luggage.

My in-laws do not hug or kiss me, or any of their children. But they, like many Chinese, find extraordinary, indirect ways of saying they care.

The most common means is food. I joke with my friends that, when I visit my in-laws in the summer, I spend the entire day eating. But in many ways, it’s not an exaggeration.

For breakfast, we’ll get steamed dumplings or jiaozi, or steamed buns, or fried flatbread, or rice porridge — and more than anyone could humanly devour in one sitting. A couple of hours later, my mother-in-law might come upstairs and then ply me with some corn or watermelon (to, of course, “tide me over” before lunch).

Then there’s lunch, a banquet of eight or nine fresh, local dishes — such as bamboo shoots, tofu and hot peppers, stir-fried greens, braised eggplant, garlic cabbage, red-braised fish, and chicken feet. It never gets finished, naturally — by the time I even start lunch, I’m already half-full from breakfast and the mid-morning snack.

After lunch and the noon nap, again my mother-in-law’s voice echos up the stairwell for the next event in this gustatory marathon — the mid-afternoon snack. Usually a nutritional porridge made of mung beans or barley, meant to take the edge off the heat or “boost blood” (it’s a Chinese traditional medicine thing). Sometimes it’s even chased with a helping of fruit.

When dinner rolls around — finally the finish line — I’m even less inclined to eat. But faced with the beguiling aroma of my mother-in-law’s cooking, I give in — to the bamboo, the tofu, the pickled radish, ah, the edamame, the hot-and-sour potato slivers, the vegetarian jiaozi…I get hungry just thinking about it. Again, we never finish what’s there, and just when we could never eat another bite, out comes the fresh watermelon or yangmei, and somehow we find the will to eat again.

It’s one thing to say “I love you” with food, and another to do it with — an entire new wing of the house??

Yes, you’ve got that right. My in-laws built my husband and I our very own, new wing to their house for this summer. Just like the toilet, no one suggested it was built for us. My father-in-law simply described it as a new addition to the home. I groaned when I heard the news. “Why doesn’t your father just redecorate the the current house?” I asked John, thinking it was such a waste of money and effort, when there were plenty of servicable rooms that just needed to be de-cluttered, floored and cleaned.

But when I arrived home, I realized I’d been wrong the entire time. When

my mother-in-law told us to take our luggage upstairs, there was the new doorway where a pile of old knick knacks had once accumulated a thick patina of dust. We stepped through the door and discovered two bedrooms with parquet floors, a wall of storage cabinets, a small hello kitty desk in the corner, a color TV, and a bed covered with a mosquito net and fluffy bamboo-print comforter. And then there was the bathroom, with a sit-down flush toilet, solar-powered shower, two new toothbrushes and huangqin toothpaste sitting in the corner.

While my husband’s maternal grandmother — “Waipo” — could never build us a home addition, her way of showing love would prove to keep me warm all the way through the winter. Literally.

Waipo is what you’d call a “freelance knitter” for factories — factories bring her bundles of hats and scarfs to finish. Last time I came, she gave me a knit black winter hat with a white snowflake pattern, ear flaps and fleece lining — it was the most luxurious little hat I’d ever owned, and I told my in-laws so later on.

I guess when the granddaughter-in-law loves one hat, she’ll really love an entire suitcase full of them. Yes, that’s right. My Waipo set aside what ended up being, in total, around 100 hats and scarves — all for John and I take home. All I have to say is…my Christmas shopping (possibly for the next four years, or more) is done. 😉

In the end, though, the most memorable indirect display of affection came

from my mother-in-law. I voiced a casual interest in learning her cooking — especially her signature pickled radish recipe. Before I knew it, I was rolling out dumpling skins, slicing potato slivers, hand-mixing salted radish medallions (bought from the market just to teach me) for pickling, and learning how to add just the right dash of Shaoxing wine to the chicken’s feet.

Meanwhile, even I am discovering how to reciprocate that love, in a language my in-laws can understand. I bought my mother-in-law, who has high blood pressure, Coenzyme Q10 vitamins from Watsons, and often handed her the capsule with a glass of water after lunch. She would usually just turn around and acknowledge me with an “ah,” taking the vitamin in her hand, and, after swallowing, quietly chasing it with well water from the mountain. It wasn’t a hug, but it was close enough.

How about you? Have you had the pleasant surprise of discovering someone said “I love you” in China — without every uttering a word? Tell me your stories.

20 Replies to “Saying “I love you” with a toilet: of indirect displays of love in Chinese families”