The other day, John’s grandma invited the two us over all of a sudden for dinner at her house. When I say “all of a sudden”, I mean that she interrupted us in the midst of preparing handmade dumplings and told John and me we were dining on fried rice noodles instead.

As much as I love fried rice noodles, her invitation arrived on an evening when I had been craving the very handmade dumplings we were preparing with John’s father. But what could we do? Here was grandma, who had been hospitalized for two months in fall of 2013, standing at the door and asking us to dine on the noodles she had already finished preparing. It was the kind of situation with “just go with it” written all over it. Besides, my mother-in-law said we only had to eat a little, just to be polite. So I hid my dumpling disappointment behind a smile, hooked my arm in grandma’s arm, and strolled out the door with John beside us.

Once at grandma’s home, she immediately plunked heaping bowls of rice noodles in front of us — each bowl easily three times larger than her own. When she said dinner, boy did she mean it.

“Aiya, too much!” John said in protest, which I repeated in turn. What happened to just eat a “little bit”, like my mother-in-law said? 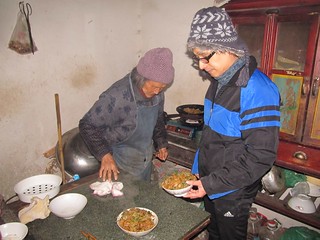 “Not too much!” Grandma said in a gruff voice, followed by nagging us to “Eat, eat!” as if we had to finish our bowls of rice…or else.

So we tucked into the rice noodles with our chopsticks and discovered that, if this was indeed a “responsibility”, it was the most delicious kind. I couldn’t help savoring the baby bok choy perfectly seasoned with garlic and dark aged soy sauce. It wasn’t too salty or overdone, and arguably it was the finest rice noodles she had ever fried up for us. So as I cleared the last of the noodles in my bowl, I couldn’t help but tell her, “So delicious!”

For grandma, that wasn’t praise but rather a cue to provide seconds. Before we could utter “bu yao!” grandma was on her feet, trying to shovel more rice noodles into our bowls. We each shielded the bowls with our hands, pleading to her not to add more. And when that failed, we simply rose from our stools and headed for the door itself.

Grandma chased after us with mandarin oranges, trying to press the fruits into our hands with far more strength than you might expect from a recently hospitalized woman over 80. But we pushed them back into her hands and then trotted outside, saying “Save them for next visit!”

“You know, she shouldn’t have made us those rice noodles,” I said to John on the way back home, shaking my head. “She’s still recovering from her heart condition.”

John shrugged and smiled. “That’s how she shows her love for us.” His words echoed what my mother-in-law would say after we returned home: “She shouldn’t do it, but she wants to do it because she likes you.” You could say the same about the black striped polyester pants I never asked her to buy for me (and which I could barely squeeze into) or the hulking bag of puffed rice sweets she delivered to us one afternoon.

Grandma has never hugged or kissed me, nor told me she loves me. But these days — and especially after this impromptu dinner — I’ve never felt closer to her.

13 Replies to “My Chinese Grandma, Frying Up Rice Noodles — And Lots of Love”