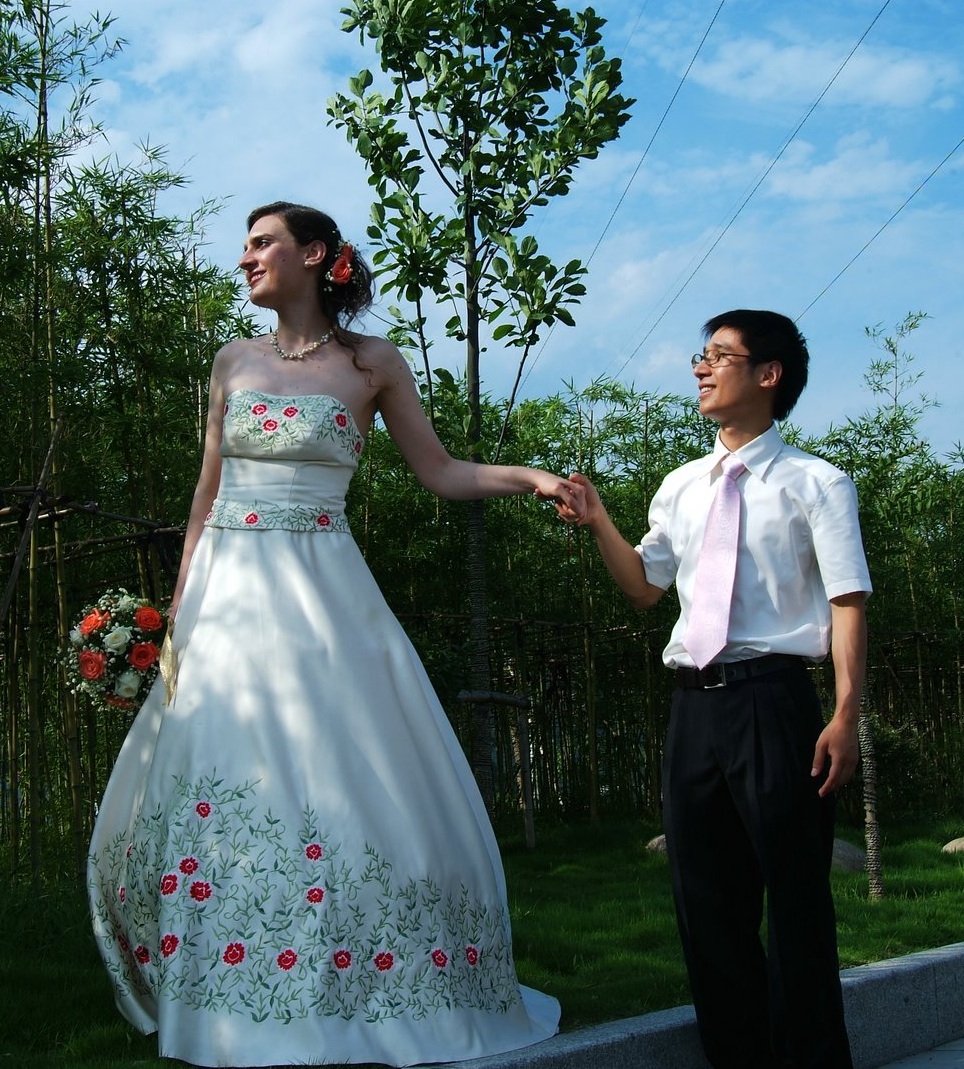 When I’m in China, I tend to turn a lot of heads, especially in the countryside — and that’s not just because I’m a foreigner. It’s because I’m often seen holding hands with my Chinese husband.

It’s true — the sight of a foreign woman and Chinese boyfriend or Chinese husband is much rarer than its counterpart, the foreign man and Chinese woman.

If you go to any major city in China, you will invariably run into the foreign man-Chinese woman pairings in any major tourist or shopping destination; not so with foreign women and Chinese men. It’s easy to gauge this reality on the website Candle for Love (CFL), devoted to helping US Americans bring their loved ones over from China. CFL is like a tidal wave of American men in love with Chinese women, with only a rare American woman/Chinese husband surfacing to break the monotony.

There are hardly enough books depicting foreign women with Chinese boyfriends or husbands. Off the top of my head, I can think of Rachel DeWoskin’s Foreign Babes in Beijing: Behind the Scenes of a New China

and Repeat After Me: A Novel, Nicole Mones’ Lost in Translation

Several years ago, when my husband enrolled in a New Oriental class in Shanghai for GRE prep, the instructor warned all of the Chinese men: “If you’re going to study abroad, prepare for four lonely years.” The underlying message was, don’t expect to fall in love — but be pleasantly surprised if it happens.

When you have a Chinese husband or boyfriend, sometimes you feel as if you belong to a lonely club. I’m not the only one. One of my dearest e-mail friends, a woman from Germany, once found me on the net because she had a — then — Chinese boyfriend and yearned to find someone to share her experience with.

So I began to wonder — why are there so few Chinese guys and foreign girls becoming couples?

Of course, some of it has its roots in the usual stereotypes — stereotypes in the Western World.

According to Sheridan Prasso’s book, The Asian Mystique: Dragon Ladies, Geisha Girls, & Our Fantasies of the Exotic Orient

, Asian men in general have long been losers in the world of mainstream American media:

If there are some admirable aspects of the portrayals of Asian women in Hollywood and on TV, it’s hard to say the same of the portrayals of Asian men. Rarely have they been depicted with traditionally masculine traits. With a few exceptions, Asian men on screen have been small, sneaky and threatening — or spineless, emasculated wimps, or incompetents who may well be technically proficient in martial arts, but impotent when faced with white man’s superior strength or firepower. Lacking machismo, they almost never get the girl.

The article Sex & the Asian Man also touches on many of Prasso’s observations, including the passionless warrior:

Even today, Asian American men complain that action heroes such as Chow Yun Fat and Jackie Chan rarely get the girl. As Leong, the author and UCLA professor put it: “Asian men can kick butt, but they can’t have a kiss.”

It gets a little more personal in blogs, such as posts titled Us Bitter, Bitter Asian Men or Sucks to be an Asian male.

I’ve had Chinese guys refuse me because they felt, as a traditional man, they could never see themselves married to a foreign girl. However, the subtext is often that foreign women are a dangerous choice — too casual, the temptress, etc — or could not accept a Chinese way of life. Generally, the pressure to split up comes from the family since, after all, in China, marriage is a family affair.

There was one Chinese boyfriend who told me, flat out, that his parents would never accept me. I don’t doubt he loved me in the beginning — but once his family knew, I suspect they made it clear that there was no future in what we had. Even my own husband was first told by his parents that he could be friends with a foreign girl, but not date her. Fortunately, their ideas changed when they met me in person!

On the other hand, there are Chinese men — and their families — who would be happy to have a foreign woman in the family. But there are other complications. For example, my good friend in Hangzhou, Xiao Yu, once told me that some Chinese men cannot overcome their feeling of inferiority — that being an American girl, a citizen of one of the most powerful countries in the world, made my presence somewhat intimidating. According to Xiao Yu, some Chinese men could never believe that such a girl would become their one and only.

And then there are the more unmentionable reasons.

A driver who took me to the Beijing Airport this summer admitted he once had a Russian girlfriend when he was a college student. But he said he was never able to satisfy her (yes, in that way), so they parted. The experience was so traumatic that he never sought another foreign girlfriend again.

On the flip side, I suspect that some foreign women might be unwilling to give Chinese men a chance because of money. Average Chinese men tend not to earn big salaries in China, unless they are, for example, bosses, high-powered execs, or an in-demand talent. And if they are to leave China to go to her country, they will face even more obstacles to earning money — language, culture, prejudices.

Still, despite the odds, sterotypes and other barriers, it does happen that Chinese men and foreign women get together. It happened for me — and a growing number of other women, including bloggers such as the Local Dialect, The Downtown Diner, and Wo Ai Ni. On occasion, it even creeps into the news, like this story.

For now, though, I’m just happy to have John, my Chinese husband, in my life. Not because he’s a Chinese man, or because our relationship is “unique” or different. But because I love him.

Are you a foreign woman with a Chinese boyfriend/Chinese husband? Or are you a Chinese man dating or married to a Chinese woman? What’s your take on this? What did I miss? I’d love to hear from you!