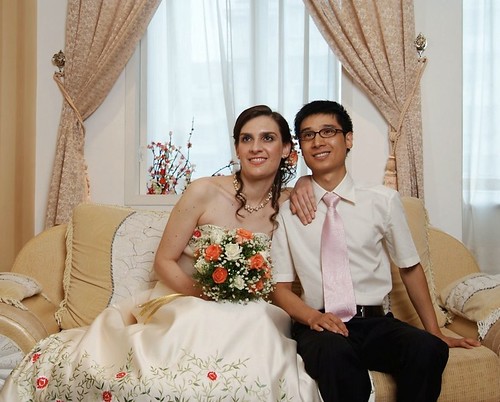 “Did you always want to marry an Asian guy?” That’s what a friend of mine asked me the other night, a question that surprised me.

It’s not that I didn’t know what to say. “No, I never really even thought about it until going to China,” I told her. Then I landed in Zhengzhou, and met a super-sexy, sullen James Dean of a guy who just happened to be Chinese. And while I didn’t end up marrying him, he opened my eyes to a new reality — that I could find love with a Chinese man — that eventually led me to John.

Maybe her words shocked me because yellow fever, Asian fetishes — whatever you want to call it — just never entered into my own equation, and I know I’m not alone. Sometimes I read about Western women with their own secret hopes of landing an Asian boyfriend. But I’ve rarely encountered such a woman in the community of Chinese men and Western women in love. More often, I hear stories just like mine, the kind of “I happened to go to China” or “I happened to meet this one guy” sort of thing.

In fact, if you just considered my dating history prior to China — all white American guys — you would have assumed I’d end up with the same for a husband. But I didn’t, all because I made this last minute, seat-of-my-pants decision to head to China to “take a year off” and figure things out for myself.

Sometimes, it’s amazing how one small decision can change your life — and love — forever…and in surprising ways. 😉

Did you or your wife intend to marry a Chinese (or Asian) man? Or were you/her more like me, completely taken by surprise in the best possible way?

31 Replies to “I Never Intended To Marry a Chinese Man”