“Jocelyn Eikenburg, an editor with China Daily who is originally from the US, first came to China in 1999 and has lived in the country for over a decade. In her speech, she shared her romantic story with her Chinese husband to the audiences, discussing reform in the country’s marriage laws that now ’empowers individuals to follow their hearts in one of the most important life decisions a person can make.'” (Read the full article)

“Jocelyn Eikenburg, who lives in Beijing and founded the popular expat blog Speaking of China, describes being married to her Chinese husband as ‘intercultural, interracial, international and bilingual.'” (Read the full article)

When a Chinese Man Loves a White Woman

“American Jocelyn Eikenburg, founder of the popular Speaking of China blog has played a key role in the integration of the global WWAM community.

“Why don’t Western women date Asian men?” one of Eikenburg’s articles featured in the Huffington Post, wisely invited women to look at the vast ethnic and cultural diversity of Chinese men instead of writing them all off per se as a single, homogenized race.” (Read the full article)

Published on The Global Times on February 2, 2016

“For Jocelyn Eikenburg, a 38-year-old American who has been in China for seven and a half years, shopping for Chinese New Year is a very important annual celebration, just like Christmas.” (Read the full article)

“In this episode we have a girls’ talk with three special international women who came to China for work, and unexpectedly found love and a second home in China.” (Watch the full episode online)

Published on The Los Angeles Review of Books on August 12, 2015

“Young writes in the foreword that she received 86 submissions for Dragonfruit and selected 26; of those, 13 essays are by women who live or have lived in Greater China (Hong Kong, Taiwan, or the PRC). Many of these essays — especially the ones by Dorcas Cheng-Tozun, Kaitlin Solimine, Christine Tan, Jocelyn Eikenburg, and Susan Blumberg-Kason — are the ones I liked the most in Dragonfruit….” (Read the full article)

A world away, yet much the same

“Jocelyn Eikenburg, a native Clevelander who’s now a China-based writer, blogger and creator of the Speaking of China blog, gets personal in this essay for The Wall Street Journal, headlined, “Married Without Children in China: Dealing With the Pressure in a Baby-Centric Country.”

In this respect, China sounds very much like America.” (Read the full article)

“Members of the “AMWF” (Asian Male/Western Female) community have also formed a tight-knit group online. Bloggers such as Jocelyn Eikenburg of Speaking of China and Tracy Slater, who writes at The Good Shufu, support each other and share their stories of negotiating cross-cultural relationships while living in Asia. Most of their tales are happy ones of learning to live together despite minor misunderstandings and humorous cultural gaffes.” (Read the full article)

Review: How Does One Dress To Buy Dragonfruit? True Stories Of Expat Women In Asia

“Would you take your Chinese father-in-law along on your honeymoon? That’s just what Jocelyn Eikenburg did in her “Huangshan Honeymoon.” Does being a filial daughter-in-law mean sleeping a 3-person hotel room with not only your husband and his father, but also with your father-in-law’s stinky sweat-discolored socks?” (Read the full article)

Published on Asiancorrespondent.com on February 27, 2014

“”Red Couplets” by Jocelyn Eikenburg focuses on the love the author shares with her Chinese boyfriend and the hurdles that society puts in their way. At first, they are pressured not to be seen in public because Jun, the author’s soul mate, might be pushed out of university if the administrators get to know he is dating a foreign girl. Then comes a problem with his family: “you can be friends with a foreign woman, but not date her,” Jun’s father warns his son. Last but not least, the author has to cope with the nasty comments –racism in disguise? – of her friends, who blatantly say they find Chinese men unattractive.” (Read the full article)

Mixed marriages in China a labour of love

“I felt alone in being married to a Chinese man and I wanted to find other people to connect with,” says Ms Eikenburg about her decision in 2009 to share her experiences on her blog, Speaking of China. She says she now receives scores of emails a month from Chinese people curious about meeting and dating foreigners, or partners new to, or experiencing difficulties, in cross-cultural relationships.” (Read the full article)

“Why is it is rare to see western women with Chinese men? Jocelyn Eikenburg writes about questions like these in her award-winning blog Speaking of China. Tune into Eye on China as Natalie Tso talks to Jocelyn about her popular blog and how she fell in love with her Mainland Chinese husband John.” (Listen to the full interview) 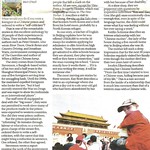 Published in the South China Morning Post on August 4, 2013

“Jocelyn Eikenburg describes courting her Chinese husband. “From the first time I started to love a Chinese man, hiding became part of my life.” This is a rare account from the inside of a relationship that is much less common that that of a western man with a Chinese wife.” (Read the full article)

“Jocelyn Eikenburg gives insight into the seldom spoken of (or seen) relationships between foreign women and Chinese men in ‘Red Couplets.’ She writes, ‘From the first time I started to love a Chinese man, hiding became part of my life.’ As she watches droves of Western men couple up with Chinese women, she feels alienated by her expat girlfriends, too, who openly express their romantic disdain for all Chinese men. In a past age, her girlfriends’ blunt commentaries about their preferences for partners would have been edgy, but in the global, expat realm, they are the close-minded and cruel characters of the story.” (Read the full article)

“Language can play a key role in the meeting, wrote Jocelyn Eikenburg, an American writer and blogger from Ohio, in an e-mail interview with Metro Beijing. She is married to a Chinese from rural Zhejiang Province. Eikenburg’s husband thinks her ability to speak Chinese helped change his parents’ minds about him dating a foreign woman.” (Read the full article)

Married to a Culture Clash

“Living in China, it is fairly normal to see a Chinese woman in the arms of a Western man. The sight of a Western woman with a Chinese man however is still somewhat unusual and that’s definitely part of what makes Jocelyn’s blog so inspirational.” (Listen to the full interview)

When an American Girl Meets a Chinese Man

Published in Beijing Today on January 6, 2012

“Through sharing her stories of love and family – the good and bad – Eikenburg has become a leading voice for those who want to learn about the dynamics of a relationship between a white woman and a Chinese man.” (Read the full article)

“Posting stories about her personal life, especially relationships with her Chinese husband and in-laws, American Jocelyn Eikenburg offers advice to people in cross-cultural families and dating dilemmas. Covering issues such as where foreign women can meet Chinese men, to how to integrate into a Chinese family, Eikenburg offers refreshing perspectives on the intricacies of intercultural relationships and her love of Chinese culture.” (Read the full article)

On the Fast Track to Love

“‘I’ve always felt more comfortable in the company of Chinese men, since their culture is more in tune with who I am,’ US born Jocelyn Eikenburg, an English/Chinese translator who married a Chinese man and blogs about intercultural relationships, said…'” (Read the full article)

“These women’s personal, candid blogs have helped online communities of Western women and Chinese men looking for advice, or even sometimes love. Eikenburg, who writes Speaking of China, arguably the most popular blog discussing these rare pairings, says the most common question she receives from Chinese men is where to meet foreign women, while Western women are often unsure of how to “read” Chinese men.” (Read full article)

Becoming One With China

“Jocelyn Eikenburg, the founder of the Wu Way Company and Speaking of China is the person to go to for informative tips and quips on dating Chinese men. On her blog, Speaking of China, she shares the trials and tribulations of her cross-cultural, interracial marriage. Jocelyn sits down with Agenda to provide us with valuable insights into Chinese culture, and how she’s growing to become part of it.” (Read full article)

A Love Affair With China

Published in the Global Times on February 21, 2011

“As a Western woman with a shorter Chinese husband, she has turned a lot of heads, but Jocelyn Eikenburg is determined to question and challenge stereotypes about Chinese men and Western women in love.” (Read full article)

One Reply to “Press”