At the end of March, I traveled to Beijing to appear on a panel with Ember Swift and Edna Zhou as part of a book launch of How Does One Dress to Buy Dragonfruit for the Beijing Bookworm Literary Festival.

This was my first-ever appearance in a literary festival. (Hello, nerves!) But I decided, what better way to prep myself (and relax a little) than to attend an event in the festival? I caught the Writing China Through History event with three very fascinating authors and journalists (moderated by Ian Johnson, who wrote Wild Grass, one of my favorite books about China). All of them had terrific and often humorous stories to share. 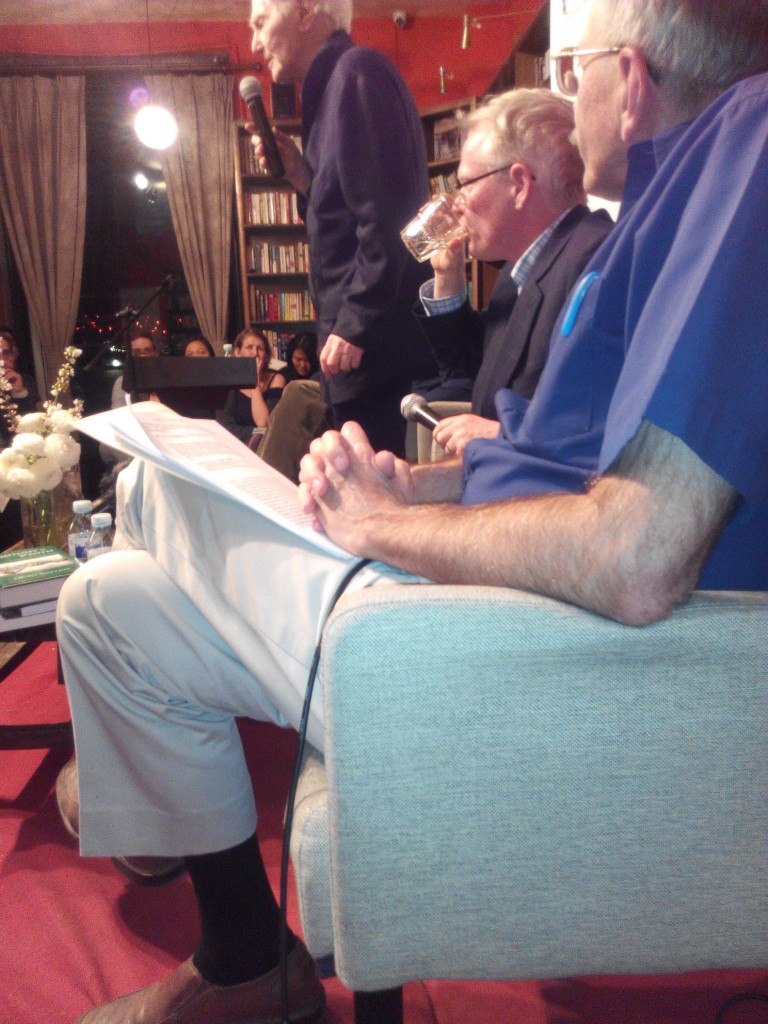 That evening, the Beijing Bookworm looked so romantic with its lanterns all aglow. How I wish John had been there to see it! Everyone at the Bookworm was so welcoming, including Anthony Tao (who blogs at Beijing Cream).

Later that night, I saw Ember Swift playing live at the Temple Bar, where I also met two other Western women with Chinese husbands in the audience! (Sorry, no pictures of that!)

Nothing builds confidence like a great hair style — so I had my hair done Sunday morning at a hair salon in Sanlitun.

I had lunch at Element Fresh with my friend Peter, who I think of as my “brother” here in China (he and I met in 1999, when I first came to China). He promised John he would be there to attend my event (and take photos!).

Would you believe, the event actually SOLD OUT! I was stunned! I wish had taken a photo of the audience, with over 50 people in attendance!

Sometime after 2pm in the afternoon, we were on! I started off by reading my essay, followed by Edna and then Ember.

During the panel, I spoke about the pressure of being married for 10 years in China with no kids, how I’m committed to spending the rest of my life in China, and also some funny anecdotes about how my husband seemed to have set up my WeChat account to make it harder for people to find me (one of the women I met at Ember’s show said her husband did the same thing, so apparently I’m not alone!). Ember and I also swapped experiences during the panel, which turned out to be a lot of fun! And Edna shared some terrific stories about what it’s like to be a Chinese American woman living in China.

People asked questions about everything from whether it gets easier if you can communicate better with your mother-in-law (both Ember and I agreed it doesn’t get easier!) to how you can cope with repatriation and the struggle with fitting in (Ember suggested creating, I agreed and added that I had actually started up this blog in the US, when I yearned to share my experiences in China). 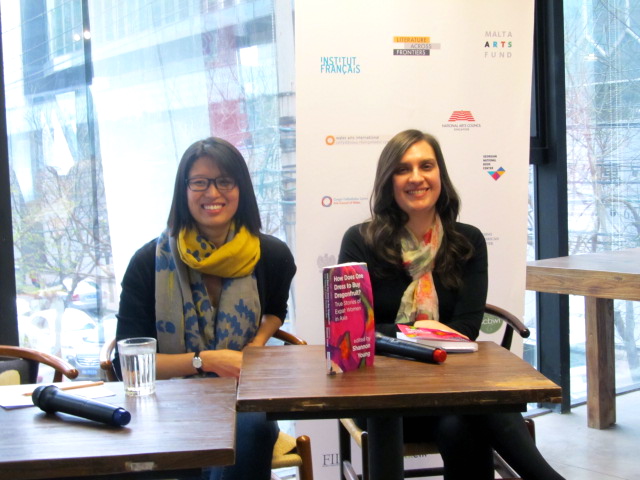 I met some fantastic people there, including Oda from Chinadoll:

Someone came up to me after the event and said it was one of the best events they had attended during the literary festival. Wow!

Afterwards, I had a lovely dinner with Rosalie of Rosie in Beijing, along with one of her friends and Alejandra at a delicious Middle Eastern Restaurant called Rumi. Unfortunately, I don’t have any pictures of that (I was seriously running on pure adrenaline by that time because I hadn’t gotten much sleep during the weekend and when I’m like that, I’m super-forgetful.) But here’s what Rumi looks like from their website:

The following day, I met Charlotte of Chinese Potpourri in the Beijing South Railway Station just before my train took off for Hangzhou. We had Starbucks (which I haven’t drank in a LONG time…boy, was that green tea latte with soy amazing!).

Unfortunately, when you pack in so much into one weekend with so little sleep and travel, it is bound to catch up with you. I caught the flu on Thursday (ugh) and am recovering as a write this. Still, I wouldn’t have changed a single thing — going to Beijing to appear in this literary festival was such an honor, and incredibly life changing.

Can’t wait until I have the chance to do another literary festival in the future!