What do Chinese men face today when they go on blind dates in China? Just ask “Ted”, who has had 15 blind dates over one and half years and lived to tell his own surprising tales. Read on to find out what he has learned from his own blind dating experience.

Do you have a dating or love story, or other guest post you’re dying to share on Speaking of China? Head on over to the submit a post page to learn how you can have your experiences published right here.

After using a mainstream dating website in China for one and a half years, I successively met 15 different Chinese girls in China. If blind dates are like interviews, then you could say I’m an “interviewee” with a lot of experience. In sharing my own “interview experiences” here through my blind dates, I hope it might help you find your own true Mr. or Mrs. Right in China.

Chinese girls are usually not willing to pay the bill for dinner. In fact, one of the most important consideration factors for girls who are dating is this: Will the boy actively pay the bill for dinner? If a guy pays the bill without prompting or reminding, he’s considered a gentleman. Among the 15 girls I have dated, only 1/4 were actually willing to share the dinner expenses with me. The most expensive dinner I have had was with a girl who returned from a stint abroad. She said that she never brought her wallet with her when having dinner with guys because the guy would always take care of the expenses. Most of the girls let me choose where to have dinner. But for my most recent blind date, I decided on a fast-food restaurant for our first meeting. The girl expressed her dissatisfaction very clearly: “It’s not polite to invite a girl to have fast food on a date. Such bad taste. You should take a girl to elegant places such as a nice cafe.” Meanwhile, she was puzzled with my backpack. “As a guy approaching thirty, you need to learn how to dress yourself.” I was so confused – I work in the education field and here I was, being evaluated by a new graduate. As far as I know, a lot of office workers outside China use backpacks and so do professors in universities.

The questions I frequently encountered on blind dates with Chinese girls include the following: How much is your salary? Do you plan to buy an apartment? What is your future career plan? Of course there are many girls who would ask private questions such as what happened in my previous relationships or why I broke up with my ex-girlfriend. As to my own experience, most girls hope that the guy’s salary will be 1.5 to 2 times higher than their own salaries. Most Chinese girls also regard owning a home an important guarantee for their sense of security. They even have specific requirements regarding where the guy needs to buy an apartment. Almost all girls consider the home a non-negotiable for marriage. Therefore you have no way to get married if you do not have an apartment in China, because you cannot give them the sense of security they require.

I also asked some girls whether they would ask for a house from an American guy. Their answer is, “Maybe not.” They think that getting married to an American guy means immigrating to the United States and living a good life, and most Americans have houses. An American passport is the ultimate worldwide passport, so they don’t care whether an American guy is rich or not. But when turning to guys in China, most of the girls I have met expressed different opinions. Guys should support their wives financially and they should surrender their ATM card to the girl after marriage.

Another strange phenomenon is that I’ve found a lot of Chinese girls are not able to cook, nor do they know how to do housework. They think hiring a maid is the way a husband shows his love for his wife. In my family, my parents share the household chores. I am sure the girls I met are much different from our elder generations. For example, a pretty girl I met recently insisted she should not cook or do housework, and she should spend her own money while her husband supports the family.

Some of my female classmates got married to Americans. After marriage they are virtuous, domestic and share family expenses. I am just wondering whether all the sensible girls have gone to the United States or whether Chinese men are too obedient.

4. The Merry-Go-Round of Blind Dates

“You are the fourth guy I met today.”
“I met one guy in the morning and another in the afternoon. You are the third one.”

This is so awkward to me, a guy with a devoted heart. But the interesting thing is that a lot of girls I met showed great loyalty to their ex-boyfriends. It is not easy for them to forget the past heartbreaking relationships and they will usually mention their ex-boyfriends. By the way, girls love sweet talk; serious topics will make them unhappy.

In my opinion, compared to my father’s generation, these girls have really changed a lot. So now I’m shifting my focus to foreign girls and I wonder, will they be different? 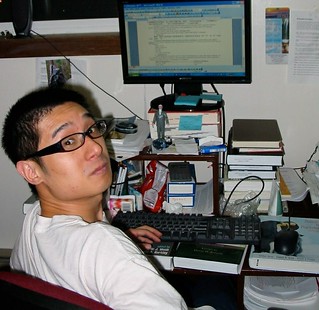 “You should check out this website.” That’s what I’ve been telling a number of readers who send me Ask the Yangxifu questions — I refer them to some of the fantastic sites that I follow and admire. So I thought, maybe it’s time to do a brief post and spotlight some of my favorites?

Western Wives, Chinese Husbands. I’ve dubbed this article, which I compiled together with the generous help of three other yangxifu (including Melanie Gao and Jessica Larson-Wang), “everything you wanted to know about dating Chinese men but were afraid to ask.” Whenever I hear from a woman new to the dating scene in China looking for comprehensive advice, I always send this along.

The Love Life of an Asian Guy. Ranier Maningding dishes out some of the funniest advice around, and speaks to both Asian men and the non-Asian women who love them.

Candle for Love. This forum was created to help Americans bring their Chinese loved ones over to the US (and navigate the whole visa process). But it’s also a good sounding board for anyone grappling with cultural conundrums in their relationships — especially Western men dating Chinese women.

Asian Man White Woman Magazine. Founded by JT Tran, the Asian Playboy, this magazine bills itself as the lifestyle and dating site for AMWF relationships — and offers advice written by JT and white female bloggers. I also interviewed JT, and I frequently send this interview to Chinese men seeking advice on dating Western women. (Disclosure: I’ve written for his site, and JT is one of my advertisers).

What sites or articles would you recommend? Sound off in the comments!

Recently, a reader wrote the following to me:

I remember when I was back in [city in China] I was with a large group of Westerners for our orientation and a lot of us got to talking about potentially starting relationships in China. There was one American girl, who was very pleasant but kind of heavyset and nothing special to look at, who said she wouldn’t settle for anything less than Jay Chou or a local Chinese rapper we knew who was modelesque stunning. Another man on our orientation, who is fifty years old though not bad looking, also said he would only go for girls between the ages of 25-30 who were “drop dead gorgeous.” END_OF_DOCUMENT_TOKEN_TO_BE_REPLACED

I’ve been going out with my Chinese girlfriend for the last five years, on and off, mostly on though. Yes, that’s a bit of time, but since the last couple years her mother, whom I have met for a two week stay in China before, has been insisting that we get married. I know part of it is that her mother is traditional, my girlfriend is their only child, I’m her first boyfriend (big one), and now she only has a few months left still to find a job here in the US, or she has to go back to China. As for me, I’m still looking for a job and housing, and I feel like I’m only 26 years old and not ready yet, especially under these circumstances.

I know she and her mom love me to death, but I know there is an undercurrent of me having to “help” or “do her a favor” so she doesn’t have to go back. Honestly, I’ll say, as an American I do feel like her mom is kind of using me, and furthermore my girlfriend has also put this in terms of “doing a favor for each other”, or “an “engagement”, meaning the marriage certificate. Then the plan would be whenever we get things set up we would go over to China to have a big wedding. Now this does sound really great but I am confused and I do feel like I’m kind of being pressured into this. I don’t want to have my girlfriend go back to China, but at the same time I hate to be the one who “holds the key” to us staying together, and to her future. END_OF_DOCUMENT_TOKEN_TO_BE_REPLACED