Chindians are people who identify as both Chinese and Indian. But, as Sydney-based social entrepreneur Kevin Bathman puts it, “the Chindian culture is often a forgotten and unrepresented subculture.” He hopes to change that through the Chindian Diaries, his storytelling project that captures and documents the lost stories of Chindian marriages and families.

The Chindian Diaries began in 2012 when Kevin started delving into his own Chindian heritage (his father is Chinese and Tamil, his mother Chinese) and felt compelled to write up and share his family stories. Then he invited others in the Chindian community to join in through the website and Facebook page, and soon more stories and photos documenting Chindian interracial marriages and families started coming in. The Chindian Diaries’ Facebook page (over 3,000 likes and counting) and coverage in the media ( The Diplomat, The Star, New Straits Times, Australia’s Special Broadcasting Service and more) attest to the project’s growing popularity and success.

I’m thrilled to introduce you to Kevin Bathman and the Chindian Diaries through this interview, which covers Kevin’s family, his favorite couple on the Chindian Diaries, why he believes there are fewer couples of Chinese men/Indian women, what it was like to spend Chinese New Year in his Chindian family and more.

In the course of the Chindian Diaries project, you’ve shared your own family stories. Could you tells us any fascinating or surprising things that you have learned about your own family?

When I first started this project, we were told to delve deeper into our family ancestry – something that I hadn’t done but had been meaning to do for a while. Some of the surprising facts I found about my paternal side of family include how my Chinese grandmother was disowned by her own family for marrying my Indian grandfather. This led to my Dad not having known the Chinese and was only exposed to the Indian side of the family.

I also learned more about my aunt, who had a staunch Catholic upbringing and all her siblings married three different races in Malaysia — a Chinese, Indian and Malay partner. It’s more common now but in those days, it did raise a few eyebrows in the family!

You’ve noted that the majority of Chindian marriages are those where Chinese women marry Indian men, leaving Indian women marrying Chinese men in the minority. Do you have any thoughts on why this happens?

There are no concrete data or evidence that has ever been collected on this subculture. So, while its hard to gauge the number of Indian men marrying Chinese women, and vice versa, there are some theories.

In those days, a male child (sons) played a more dominant role in the family, and many went against their family wishes and married their Chinese partners. They chose love over family obligations. A daughter, on the other hand, was thought to be more subservient and followed the wishes of the family. But, not in all cases obviously.

Could you mention one of your favorite couples on the Chindian Diaries?

This is my favourite couple story:

MARRY WITHIN THE RACE

Born to an Indian Mum and Chinese Peranakan Dad has made me appreciate the three cultures that run in my ancestry: Baba Nyonya, Chinese and Indian.

My parents met in 1975 when they worked at the same medical company in Negeri Sembilan. Back then, Dad was a supervisor and Mum, a lab assistant.

According to Mum and Dad, when they first met – it was love at first sight for both of them!

Nervously, Dad had approached Mum while sending some chemical samples to the lab and had asked her out on a date. Mum recalls feeling smitten after being asked by a good looking Chinese man.

Although my grandfather Varatharajoo was Indian, he could speak Hokkien fluently due to the fact that most of his friends were Chinese. But to him, it wasn’t enough for him to allow his eldest daughter to marry a Chinese man.

Eventually my grandfathers found out about their relationship and restricted them from meeting each other. On one occasion, Mum tried to sneak out from the house to meet Dad but was caught by my grandfather. She was grounded and had a curfew placed on her.

Despite the odds, they were in love with each other and tried their best to see each other. This continued for 2 years.

Bit by bit, they managed to convince both my grandfathers about their relationship. And when my grandfathers finally saw how serious they were in getting married, they finally relented.

After both the families met, my grandfathers agreed that true love and their children’s happiness were more important than keeping with tradition.

Story of Mollyna Goh for The Chindian Diaries

Since the year of the horse is upon us and everyone’s getting ready to “guonian” here in China, I have to ask — what was it like celebrating Chinese New Year in your home? Did your family give the holiday a little Chindian flare? 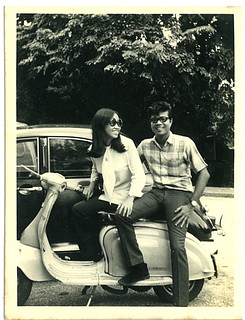 Our Chinese New Year fare was a big feast when my Chinese grandmother was still around. She would cook a whole tableful of traditional Chinese dishes, but also would include many Indian dishes which she mastered as well. After my Chinese grandmother passed away, we did less of the traditional dinner, and chose instead to do our meal in restaurants.

From conversations with other Chindians, there was always evidence of both cultures in their celebrations. You normally get the Indian relatives visiting a Chindian household during Chinese New Year, and the Chinese relatives visiting them during Deepavali, the festival of lights for Hindus.

The Indian and Chinese cultures are very similar in many ways:

1. Cultural norms like the colour red. To the Chinese and Indian, red is an auspicious colour especially for weddings, whereas white is deemed inauspicious. Widowers of both cultures wear this colour.

2. Family values, respect and looking after the elderly have high significance in both cultures.

4. Roles of women and men in the marriage 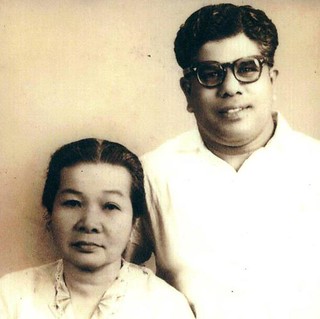 Looking over the interviews with Chindians, most of them do feel a sense of belonging to both. Whichever culture they resonate more, depends on their upbringing. With Chindian weddings, for example, most of them have the traditional Chinese tea ceremony and the Indian temple wedding to honour both sides of their heritage.

I have yet to meet a Chindian that has disregarded one side of his or her culture. Some of them have grown up without any cultural barriers or issues, but yet some of them felt ostracised by one of the races, or worst, both.

As their grow up, they eventually find the beauty of coming from a mixed background and most of them are proud of their Chinese and Indian background.

While it can be a trying time growing up as a mixed child, the thing to remember is they have the best of both worlds, and that they can use it to their advantage.

My advice to mixed-race families is to honour all the cultures, and to expose their child to as many of the cultural practices and traditions, so that it is not forgotten.

Thanks again to Kevin Bathman for doing this interview! Visit the project’s website and Facebook page to learn more about the Chindian Diaries and how you can get involved.