It’s not everyday you hear about a romantic comedy that deals with love, divorce and getting audited by the IRS. Or, for that matter, a movie produced by an Asian man (James Huang) and a White woman (Elizabeth Sandy) who are married and who also star in the film as the romantic leads.

Starting from Scratch is one unique rom-com. This movie dares to be honest about relationships and, in the process, offers a funny and poignant example of what happens when two people are facing a divorce and financial hardships at the same time. And for once, it tells the story — which is one that almost anyone can relate to — through an interracial couple.

Since 2013, Starting from Scratch has screened at film festivals across North America, winning awards including Best Film (DisOrient Film Festival) and Best Comedy (Asians On Film Festival). And now you can enjoy the film in the comfort of your own home, wherever you live. Starting from Scratch is available to watch online starting now for audiences in North America (USA, Canada, Mexico) and everywhere else around the world.

You can check out a trailer for the movie online or visit the official Starting from Scratch website to learn more about the film.

I’m so thrilled to introduce you to Starting from Scratch through this interview with actor and filmmaker James Huang, who wrote, directed, produced and edited the film, and also played the lead role of Jake Lew.

Starting from Scratch was inspired by a time in your life when you were broke and getting audited by the IRS while struggling with a relationship that ultimately ended. Yet this movie is a romantic comedy, which is really a twist! Why did you decide to turn this story into a romantic comedy, instead of just a drama?

The movie is a work of fiction, but all story is rooted in truth. When the IRS audited me a decade ago, you have to sort through a years worth of paperwork to account for work. You have to remember what each of these receipts and bills are and most them were memories of trying to salvage a broken relationship. I was forced to reflect on a terrible year in my life and it felt like I was being punished financially for all my mistakes and failures. It’s sobering to face your past choices by tracing how you spent money. It was the toughest and best therapy I ever had.

Six years later, I met Elizabeth, the love of my life, and I kept thinking to myself: ‘Do not mess this up! Do not make the same mistakes twice!’ I guess I started channeling my fears and wrote a story about my new marriage as if I hadn’t learned a darn thing. So the movie begins on a therapist couch before we go through the opposite and ridiculous ways that men and women deal with a broken heart. But the audit forces them to deal with each other throughout the separation.

I had a lot of funny things happen when I was miserable and trying to rebound because you get so off kilter, your behavior is always heightened, and you feel like a crazy person pretending to be normal. You try way too hard and feel too much and you’re constantly overly affected. To get through it takes swallowing your pride and over time if you are humbled, you can eventually laugh at yourself. My friends were always laughing at my embarrassing stories about a terrible rebound attempt and I guess it helped me find the humor through the pain. It was always comedy whether I felt it or not. 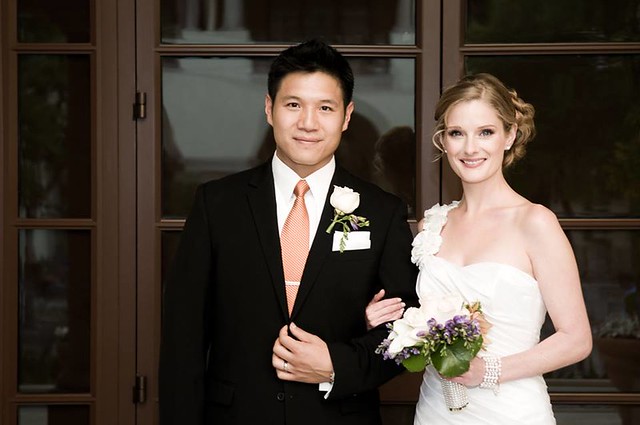 What was it like reliving this challenging experience in your life during the filming process with your wife, Elizabeth Sandy, whom you’re happily married to?

While the plot point of me getting audited after a messy break up is true, the film is just a funny and heart-felt tale of two dreamers who are trying really hard but are just facing in the wrong direction. It’s when the rom-com of your life ends and real life begins. I think audiences feel connected to the story and assume the movie is some sort of reenactment. But really, I think we’re reenacting everyone’s story in a way.

I miss the old romantic comedies, so I made my own with something new to share. Acting with Elizabeth in scenes about divorce was eye opening because it gave us a chance to fully imagine what it’s like to face each other under these circumstances. Then someone says ‘that’s a wrap’ and you go back to being in love all over again. As newlyweds, it was an exercise in love, hate, and ultimately – compassion. We work together every day and are very happily married.

Could you share with us one of your favorite scenes from the movie and why you love that scene so much?

Without giving anything away, there is a scene where I’m telling the therapist a story about my wife’s stinky feet. Rom-coms don’t usually have a pivotal scene like this play out with subtle nuance. For me, that scene landed on each phase of script, filming, editing, and audience. It’s a rare moment of alignment where I was happy as a filmmaker and as a viewer. Oh and by the way, in real life, I’m the one with the stinky feet. That’s what I mean about fiction rooted in truth. 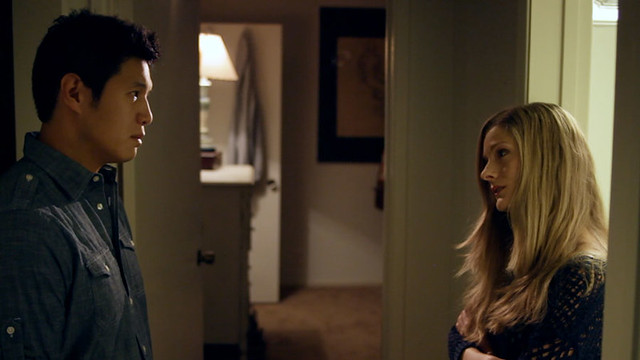 While Starting from Scratch is funny, it’s also incredibly honest at the same time, particularly about how people deal with relationship struggles. What do you want people to come away with after viewing the film?

Starting from Scratch has been playing at a number of film festivals and other venues since 2013, and you and Elizabeth have been present at some of these screenings. Could you share how you’ve seen audiences respond to the film?

Happily, it feels like everyone, everywhere, loves the film. Most people have experienced some form of a break-up (whether it be a divorce or a teenage heartbreak) and because they’re relating to it, they’re laughing through the pain together. It’s definitely inspired people to come up to Elizabeth and me and relay their experiences in love. It feels good to have touched people and perhaps helped them gain some perspective. I think that’s why we all love watching movies; a good story makes you feel connected to one another and not feel so alone. 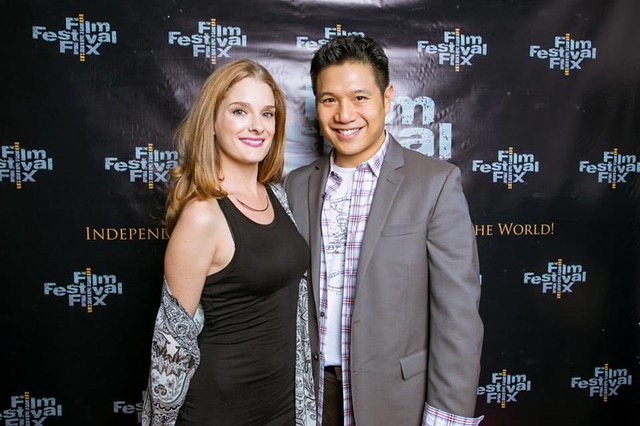 Where can people buy, rent or view this movie online?

I’m glad you asked! We are very excited to finally share this film with audiences around the world. We made this film for you to enjoy.

Starting from Scratch just launched worldwide through on-line streaming (rent or buy) and on DVD. 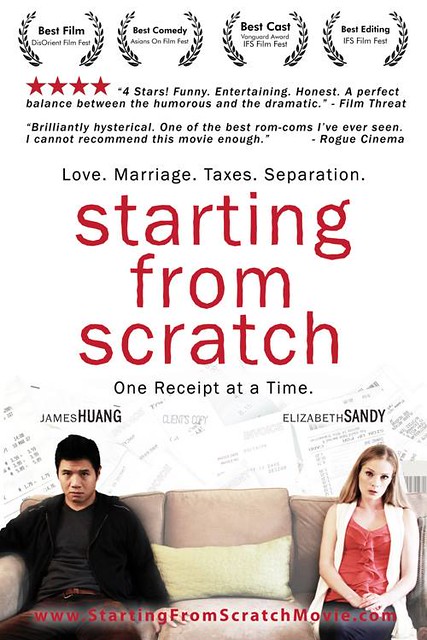 Thanks so much to James Huang for doing this interview! And if you enjoyed it, please support Starting from Scratch by watching it online (in North America or the rest of the world) and sharing it with all your friends!