Zhu Zhengting, the hot new heartthrob from boy bands Nine Percent and NEX7, stared at me from an ad, with his finger lingering seductively on the lips. It almost resembled those typical images of male models or stars, using their gorgeous faces and physiques to sell everything from jeans to jackets. But there was one striking difference.

He was wearing lipstick, a soft carnation pink, to help sell it, along with other cosmetics from a brand I discovered on Alibaba’s Tmall, an online shopping center. 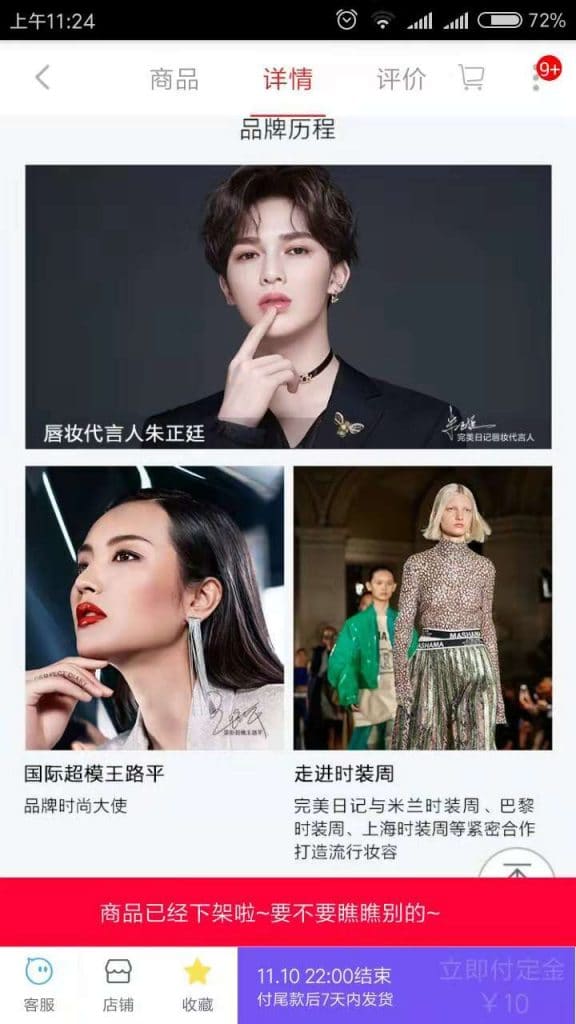 A man as the brand ambassador for lip gloss, even wearing it? It’s unimaginable in the US, my home country, for a guy to model makeup, let alone vouch for it. Unless of course you’re a celebrity drag queen like RuPaul.

But Zhengting doesn’t do drag, and he isn’t playing up his feminine side, despite the makeup and softness of the photograph. Instead, his intense brown eyes seem to reach out to you, as he points to his lips, as if to say, Go ahead and kiss me.

Actually, that’s the part of the idea behind having young men help sell lipstick and lip gloss, which didn’t start with Zhengting, as China Daily reported in the article Love me, love my lipstick:

When Japanese superstar Takuya Kimura attentively stares at you, applying rouge on his tempting lips in a 1996 TV commercial, does your heart skip a beat?

Of course you can’t have him, yet having a lipstick he used might just bring him a little closer to you.

It seems Kimura’s fans had the same idea. That year, thanks to him, more than 3 million Kanebo lipsticks sold out within just two months, an unprecedented sales record stunning Japan.

The article goes on to detail other Asian celebrities who became the face of other cosmetics brands and more. But it underscores the growing importance of men in marketing cosmetics.

Dubbed “Taobao’s king of lipstick”, Li needs to test more than 300 types of lipstick on his lips every day during a seven-hour live broadcast, taking no breaks except to drink water or go to the bathroom.

“Many people question me, believing men do not have enough expertise to recommend female beauty products,” Li said.

But he believes he has advantages in this field. While many women may find their lips hurt after testing three lipsticks in a row, he can test as many as 380 lipsticks a day.

“Testing lipstick can damage the lips, but I do not treat my lips as lips,” Li said. Therefore, his fans have given him the nickname “iron-lipped brother”.

Of course, all of this talk of men fronting lipstick brands, even wearing or testing different colors, would likely shock a lot of folks, including my fellow Americans. In the US, any man who dares to model cosmetics would surely find someone questioning his masculinity or even sexual orientation.

Admittedly, it’s a bit surprising for some Chinese audiences, as China Daily notes in its article Love me, love my lipstick: “If some people still feel confused about men advertising lipsticks, they may feel nervous when male stars also make commercials for other more intimate women’s products.”

I don’t exactly know why this works in East Asia, but it does. And there’s a part of me that wonders, is it evidence that East Asian countries like China are redefining masculinity in a new way? Is it driven by K-POP, where members of boy bands embrace makeup as part of their look? (See: K-pop boy bands defy traditional idea of masculinity)

Personally, I find it fascinating and even refreshing that there’s a corner of the world where a man can model lipstick and still be a man. I’m not sure the same would hold true in the US.

In the end, I decided to buy the lip gloss. While it had nothing to do with the arresting eyes of Zhu Zhengting, his face, and lips, certainly left an impression — in a soft carnation pink.

What do you think about men modeling lipstick?