Last week, someone asked me the China travel question. “What’s your favorite place to visit in China?”

Faster than she could say “Terracotta Warriors,” I had just the place in mind: “My husband’s family home in the countryside.”

Okay, yeah, it’s easy for me say that. I’ve bounced around Beijing, sashayed my way through Shanghai, and chilled out in Chengdu. And while I love the allure of the road, I still find myself yearning for those small moments at the family home — whether it’s making dumplings with my mother-in-law or reading my father-in-law’s story about his ancestral village.

The thing is, sometimes it’s the most ordinary things and places that make travel extraordinary — and China is no exception. So, for my last article of the year for “Travel China with the Yangxifu,” I thought I’d help you find more small moments in your own travel — and you don’t need a family home in China to do it. END_OF_DOCUMENT_TOKEN_TO_BE_REPLACED

That humble — and now fortified — abode was laojia (老家, home) to one of China’s most commanding (and controversial) figures of the 20th century: Mao Zedong.

In a China hell-bent on modernization and the the whole idea of “out with the old, and in with the new” (旧的不去，新的不来), Mao’s home offers a delightful respite from the usual concrete-block urban depression. Yes, delightful — even if you’ve sworn off the Chairman for personal reasons, or after reading Wild Swans

That might be hard to believe when you’re touring his home. People’s Liberation Army soldiers had us bustle through in a neverending line of tourists, leaving no more than a moment or two to admire the wooden canopy beds, or imagine the fiery aroma of local Hunan dishes being cooked over the old-style hearth. (At the very least, the privilege of gazing upon the humble home of Chairman Mao comes gratis, in a China where, nowadays, there’s a price on everything.)

But then John and I rambled up a dusty trail above Mao’s home, between the terraced ponds and the fringe of forest beside us. END_OF_DOCUMENT_TOKEN_TO_BE_REPLACED

Spooky masks with bulging eyes and bulbous noses. A creepy shamanic figure with an exaggerated face, and giant hands. A towering tree with serpentine branches.

I’m not talking about a haunted house — I’m talking about Sanxingdui, the Sichuan mystery that forever shook up Chinese history as we know it.

If the Yellow River is the so-called cradle of civilization, then how do we explain a cache of bronzes and other artifacts contemporary with the Shang, but worlds away from Shang style?

Archeologists called the 1986 find Sanxingdui, because there were three mounds, each resembling a star, and linked it with the Shu culture that historically teamed up with the Zhou state to eventually topple the Shang.

But there’s a problem — Sanxingdui yielded no written records. Unlike the Shang, which offered a window into their world through oracle bones, scientists can only guess the meaning in Sanxingdui artifacts. END_OF_DOCUMENT_TOKEN_TO_BE_REPLACED

There’s something so fascinating about mummies, allowing human corpses to (no pun intended) survive for thousands of years.

It’s no wonder, then, that the Hunan Museum continues to pack in the visitors, with the body of Lady Dai — dating back more than 2,000 years ago — on display as part of the Mawangdui exhibit.

Of course, you won’t see the body right upon entering the exhibit. They’ve made it the climax, letting visitors, at last, see Lady Dai lay to rest safely beneath protective glass. And it’s just as well. In life, the journey itself is often as valuable as the destination — and in the Mawangdui exhibit, the artifacts are as curious and spectacular as Lady Dai’s mummy.

The Chinese discovered the Western Han Dynasty Mawangdui (translated as “horse king mound,” a reference to the saddle-like hills where the tombs lay) tombs in 1972 around Changsha, Hunan Province. While one (Tomb 2) had fallen prey to tomb robbers, Tombs 1 and 3 rewarded archeologists with a rich collection of historical artifacts, including lacquerware, silk texts and, of course, one amazing ancient corpse.

Besides the mummy, what makes the collection so special? END_OF_DOCUMENT_TOKEN_TO_BE_REPLACED

Just across from the Western gate of Tsinghua University, one of China’s proudest institutions, sits a quiet reminder of foreign aggression on China and past humiliation — Yuanmingyuan Park (圆明园遗址), or the Old Summer Palace.

The Qing Dynasty royal family lived and handled government affairs from Yuanmingyuan for more than 100 years, using the Forbidden City for ceremonial purposes. But, during the Second Opium War, British and French troops stormed into Beijing, destroying the buildings and plundering their valuable treasures. The devastation left only a few token Chinese structures intact, but even those were later burned down during the Boxer Rebellion. The barbaric destruction by foreigners inflicted more than enough destruction, and things went downhill from there — the land was abandoned by the end of the Qing Dynasty, and even, for a period of time, used by local farmers for agricultural land. Fortunately, the Chinese governmental finally reclaimed the place in the 1980s as a historical site, and visitors have trickled in ever since. END_OF_DOCUMENT_TOKEN_TO_BE_REPLACED 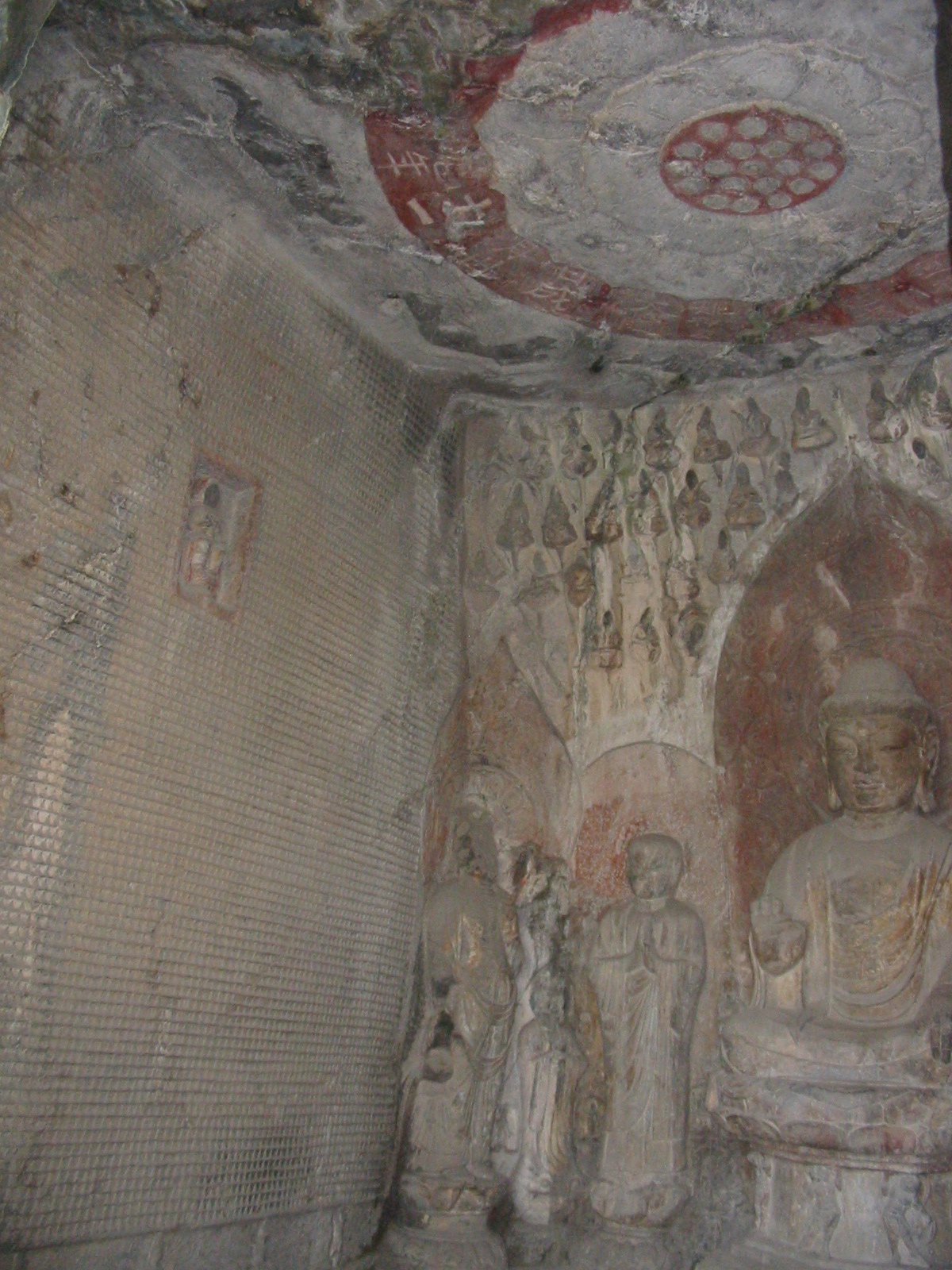 When we think of China’s great statuesque artwork, the Terracotta Warriors come to mind. They’ve become the awe-inducing, must-see of China, second only to the Forbidden City.

Yet, just East of Xi’an, four hours up the railway line to Beijing, is another grand cache of art that stands in the Warriors’ shadows, but delivers almost as many “wow” moments. I’m talking Luoyang’s Longmen Grottoes — a string of over 100,000 Buddhist images and statues carved into a hillside during China’s Wei and Tang Dynasties.

Luoyang’s Longmen Grottoes are one of several sites in China for viewing ancient Buddhist cave art — besides the Mogao Caves in Dunhuang, the Yungang Grottoes near Datong, and Bingling Si near Lanzhou. Mogao and Yungang are more famous (and, arguably, colorful), and Bingling Si, with its sheer cliffs by the reservoir and a huge 27-meter-high Buddha, more breathtaking. But Luoyang is just four hours from Xi’an, right on that train line from Beijing, so you can easily take in a little ancient cave art before heading to that more famous tourist attraction.

And, believe me, even if they’re not number one, the Longmen Grottoes are worth the visit. END_OF_DOCUMENT_TOKEN_TO_BE_REPLACED

It’s one thing to see China’s history in a museum, and another to walk on it.

In Zhengzhou’s Eastern city outskirts, you’ll find a curious mound of earth that runs through a park — the kind of park in China filled with Tai Chi practitioners, grandparents tending children in crotchless pants, inflatable play areas, and neat tiled squares and walkways. But you shouldn’t let the surroundings fool you. This is not just another park, and that’s not just another grass-covered mound. That mound marks the the site of where walls around a Shang Dynasty city once stood. END_OF_DOCUMENT_TOKEN_TO_BE_REPLACED

When you’re engaged and in China, thoughts of fancy might turn to, well, Suzhou. Not for the traditional Chinese gardens or homes. And not even for photo ops at the pagoda or Tiger Hill. You want Suzhou, because Suzhou is home to a fantastic wedding gown street (苏州婚纱一条街) — where you can get a tailor-made dream for less.

Located on a sprawling block within walking distance of Tiger Hill, Suzhou’s Wedding Gown street has none of the grace of its more famous neighboring attraction. It’s a depressing conglomeration of one- and two-story concrete stores with photoshopped signs and dresses that look dull under cheap fluorescent lighting — almost as if it were the wedding village for jilted fiancees. Yet, there are treasures behind those doors for the patient and persistent bride-to-be — with bargains that’ll have you saying a resounding “I do.”

So, what are your options? END_OF_DOCUMENT_TOKEN_TO_BE_REPLACED

Just outside of the center of Kaifeng, there’s an unusual neighborhood of old one-story, brick courtyard homes, trees and labyrinthine streets that just barely fit the taxi we rode in that afternoon. It’s a marvel, because most of these neighborhoods have been consumed by the high-rise reality of China’s real estate. Even my friend from Zhengzhou, the capital of Henan Province that sits just one hour East of Kaifeng, lamented the loss of his own boyhood courtyard home, surrounded by trees — just like the ones we pass by.

But we’re not here to visit traditional Chinese homes. This maze of architecture that once was is a visual preamble to our final destination — one even more unusual than the surrounding homes. END_OF_DOCUMENT_TOKEN_TO_BE_REPLACED

Winser Zhao of China Travel 2.0 interviewed me, and the article — called Meet a Yangxifu and Ask for More About China – Jocelyn and Her Love Story — just appeared on their blog today. Some of the things I talk about include:

If you have a chance, have a look. And if you like what you read, feel free to share with your friends.

Thanks, as always, for reading. 🙂 And special thanks to Winser Zhao for thinking of me for this interview.