When you tie the knot across cultural and even international borders, as I have, the whole idea of “I do” suddenly becomes even more complicated. Now you’ve got another culture to consider, with its own set of expectations for the wedding.

If that culture happens to be Chinese, that means there’s another possibility for your wedding dress – the cheongsam. Which leads to this question:

Do you need to wear a cheongsam in your Chinese wedding?

For those of you who don’t know about the cheongsam, also known as the qipao, it’s a high-necked and form-fitting style of dress with slits down the skirt, often on both sides. The dress first appeared in 1920s Shanghai as a modern take on traditional Manchu garb, and has since evolved into a stylish tradition of its own for women in China.

While most women in China don’t wear the dress on a daily basis, it does appear at certain holidays (like Chinese New Year) and special occasions such as weddings. So it’s very common to see brides wearing cheongsam in their pre-wedding photos and at their wedding ceremonies or banquets.

But does that make the dress a must-have in your Chinese wedding?

The short answer is, not necessarily.

I’ve attended a number of Chinese weddings where the brides never even wore a cheongsam. While you’re almost guaranteed to see Chinese brides decked out in a white frothy gown fit for a princess, the cheongsam is generally optional. (Unless, of course, it’s an expectation or wedding tradition of the Chinese side of the family.)

Still, a lot of brides in China will opt to have a cheongsam for a number of reasons. First, you get to wear more than one dress – three is very typical for weddings in China — which means, at least here, you don’t have to choose. And second, the cheongsam is a gorgeous way to add a little Chinese flair to your bridal look.

Many women have rocked the cheongsam in their Chinese weddings, and it’s hard to resist the allure of this sexy dress, which hugs every curve. I ended up wearing two in my own Chinese wedding ceremony (which I’ve shown in the photos I included with this post).

So really, the question shouldn’t be, do you need to wear a cheongsam in your Chinese wedding? Instead, you should ask yourself, do you want one?

P.P.S.: While the issue of cultural appropriation can come into play whenever non-Asian women are wearing a cheongsam, I like Walking May’s take on this:

I feel the difference between the offensive and non-offensive is crucially ‘how one wears the traditional dress’, so here’s a few ideas to consider: 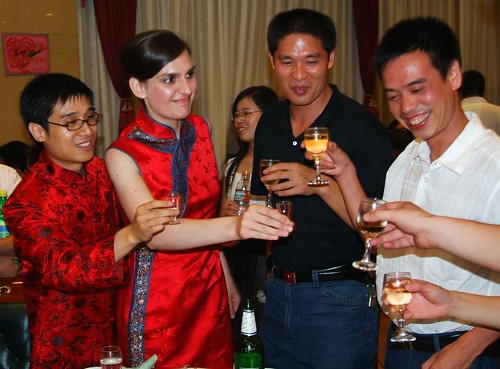 I’m engaged and planning a wedding in the States w/ my Chinese-American fiancee. He suggested incorporating a qipao into the ceremony. But I already have wedding colors for my bridesmaids’ dresses (green) and don’t like wearing red. If I decide to wear a qipao, how should I incorporate it into my ceremony? Must I wear red? Also, I will be going to China later this year, should I consider buying one over there? END_OF_DOCUMENT_TOKEN_TO_BE_REPLACED

My fiancee is Chinese and we’ve been debating dresses in the process of planning our wedding. His family is bent on having me wear a red qipao, they say it is the tradition. I wouldn’t mind wearing a qipao, but then my family is Irish on my mother’s side and they told me that only sluts wear red on their wedding day. I am feeling so conflicted about this, and was wondering what you thought. Do you think I should wear a qipao? END_OF_DOCUMENT_TOKEN_TO_BE_REPLACED

I have been taught Mandarin by a Chinese girl living abroad for a year now and sometimes she gives me some comments, that let me think. Mostly, this applies for clothes. I must say, my taste in clothes is not the average kind, and I especially like Asian style clothes, but the traditional kind. I own a qipao and also fisherman pants from Thailand, and when I wear those kind of clothes she asks me stuff like: “Why are you wearing this? You’re not Asian!” or she says “Nobody in China even wears this anymore!” I then ask her why she’s wearing blue jeans and western style clothes, when she is not from the west, but t seems like this doesn’t matter at all. I kinda get the feeling that when a western girl wears eastern clothes it gives off the impresion, that she’s trying to be Asian, but if it’s the other way around, no one seems to really care, even though all the Chinese girls that I know wear western clothes and some even dye their hair blond and such. So is this just the impression that I get or a general trend? Or is it just because there are so few western girls who are even interested in wearing traditional eastern clothes, that makes us stand out so much? END_OF_DOCUMENT_TOKEN_TO_BE_REPLACED