If you know Unsavory Elements — the anthology published earlier this year which includes my essay, “Red Couplets” — chances are you know Tom Carter as well. He edited the anthology and contributed his own essay.

But prior to his “unsavory” endeavors, he became known for his book CHINA: Portrait of a People. This collection of photographs from all 33 provinces in China offers the most comprehensive view of China in book form. Tom spent two years backpacking around the country to capture these photos, which amazes me.

A San Francisco, California native, Tom has been hailed as  “one of China’s foremost explorers” by The World of Chinese magazine. You can buy CHINA: Portrait of a People and Unsavory Elements on Amazon.com, and also follow Tom Carter at his website and on Facebook. For more information on Tom’s work, see his photo gallery on the Atlantic, this video on ChinaFile, and an article he wrote for the Huffington Post.

In this interview, Tom talks about CHINA: Portrait of a People — and shares some of his favorite photographs as well.

It’s clear that you have a great passion for China. Could you talk about how the experience of photographing your journey around the country changed your own perspective on the country?

To be completely candid, prior to coming to China my estimation of the Chinese was not very high.  As a San Francisco City native growing up in North America’s largest Chinese community, I found Chinese immigrants to be rather aloof and unapproachable.  They didn’t seem to “mix” well in our Great American Melting Pot, which in turn validated the Caucasian community’s prejudices towards them; a kind of self-perpetuating vicious cycle.

I eventually came to China (in 2004) not out of any affinity for Chinese culture but simply because I wanted to travel and see the world, but once I got here it didn’t take long to fall in love with the place and its people.  Having immersed myself in its society, my appreciation and passion for Chinese culture far outweighed any occasional lapse in tolerance I still might have been guilty of.

Could you tell us about the most romantic place you photographed?

Gosh, I’m not sure that’s answerable; the notion of romanticism is relative to the person you are at that time.  I’ve watched my own ideas of romance and love mature over the past ten years here in China, from a swinging single American male just looking for a good time, to eventually meeting the woman who I have no doubt is my soulmate.

We were married in a rural village in the Jiangsu countryside and she recently gave birth to our son there as well, at a small public People’s hospital. So for me, that little farming village is one of the most special places in my life.  Romantic?  Depends on how you feel about peasants and pitchforks and livestock and rice fields and bamboo groves…

You brought your wife along with you during your trip. What was it like traveling together as a couple?

We met in Beijing in 2005 while I was working there, but then the following year I departed to go backpacking across the entire country alone, which had been a dream of mine since I first arrived.  We stayed in touch – she even bailed me out of not a few hard situations via phone and rendezvoused at her home village over October holiday so that I could meet the parents (and like 50 other random relatives).  When I finally returned to Beijing the following year and landed my book deal (to publish CHINA: Portrait of a People) I decided to go back out on the road for another year to obtain more photos, but this time I invited her to come with me.  She quit her job, bought a backpack, and we re-traced my steps through the 33 provinces and also discovered new places together that I never would have found without her.

I think spending that much time with someone is a true test of any relationship, but for us the balance of bliss and hardship that comes with budget backpacking in a developing country seemed to bring us closer together.  We did a similar trip across all of India in 2009, a rough, brutal journey that she seemed to handle far easier than me (she’s publishing her own book about India next year).  She’s small in stature but even more of a bad-ass than this 6’4” American!  By the end of that trip there was no question in my mind that she was the woman I intended to marry.

Tell us about another fascinating couple you photographed during your travels.

In spite of China’s rapid modernization (and westernization), public displays of affection are still not very common in this country, so I was sure to steal a snapshot on the rare occasion that I spotted one, such as the uniformed highschool students sneaking a kiss behind a bus-stop billboard.

But for me the most special and personal photograph is of the elderly couple in Beijing celebrating their 55th anniversary.  I feel so blessed to have captured their embrace in that photograph – it’s not something you often see any couples let alone old folks in China do.  About a half-decade after taking that photo, that elderly couple became my in-laws (they are my wife’s grandparents) but the following year Laolao passed away, followed quickly by Laoye, whom we can presume died of a broken heart.  But they have been immortalized in the pages of this book for future generations of our family.

What message do you hope people come away with when they read your book?

I think each photograph in this book conveys its own personal message about life and humanity in China: deep-rooted traditions, the importance of family, a dwindling yet proud agrarian class, rich indigenous culture, and dire widening economic and regional disparity. But I try to let the photos speak for themselves without shoving a message down anyone’s throat, which is why I decided against narrating my journey or being too heavy-handed in the book’s captions (which some readers have actually complained about on Amazon).

But mostly I just hope the book inspires people to get out there and explore some of “real” China beyond the touristic sites and the glistening steel-and-glass skylines of its major metropolises. It’s a big, beautiful country, and the regions that aren’t getting any attention are the places that are, in my opinion, the most deserving of it.

Thanks so much to Tom for this interview! Once again, you can buy CHINA: Portrait of a People and Unsavory Elements on Amazon.com, and also follow Tom Carter at his website and on Facebook. For more information on Tom’s work, see his photo gallery on the Atlantic, this video on ChinaFile, and an article he wrote for the Huffington Post. 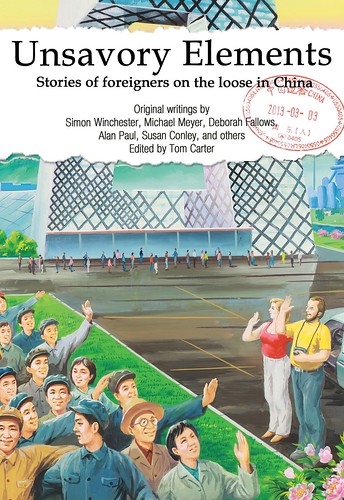