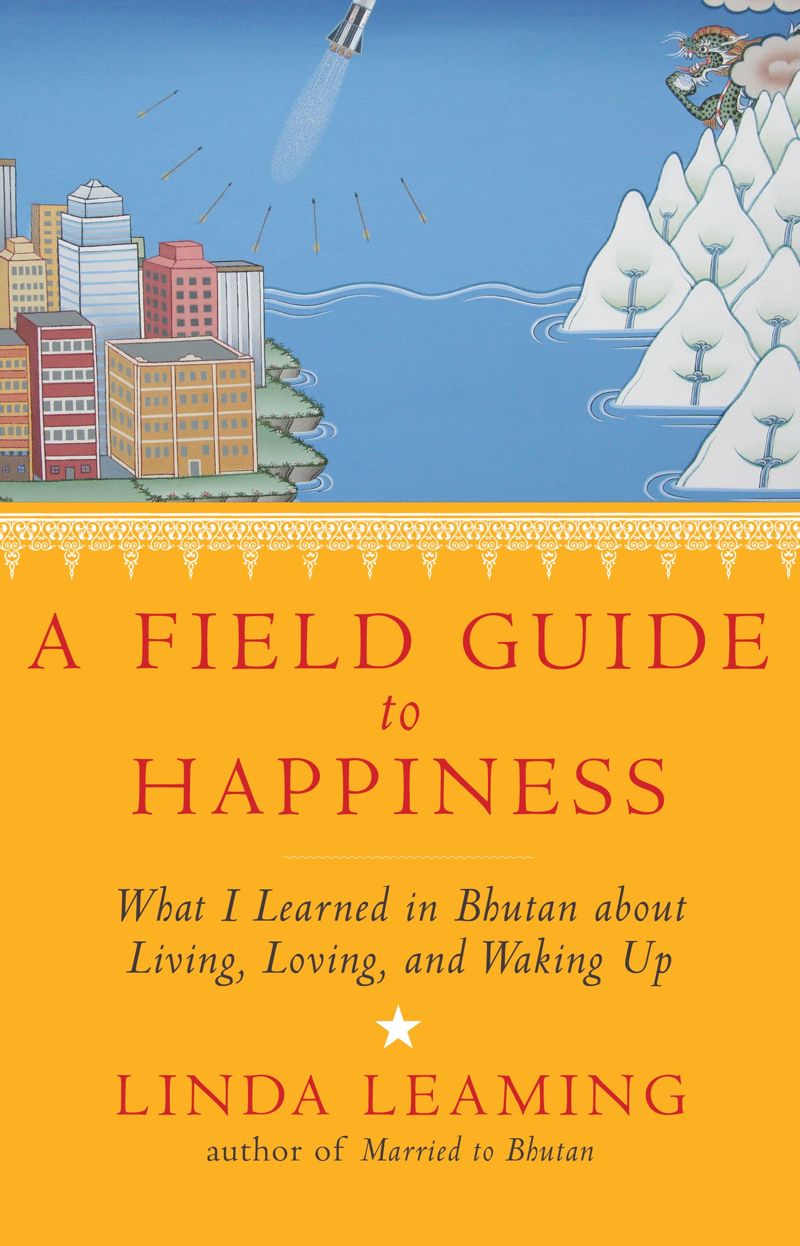 Married to Bhutan by American Linda Leaming — which tells the story of how she found her bliss and a husband in this oft-forgotten Himalayan country — remains one of my personal favorite AMWF memoirs for a very simple reason: Linda.

She’s delightfully self-effacing (such as when she shares her many awkward “lost in translation” moments while learning Dzongkha, the official language of Bhutan), hilarious (a friend mistakenly calls Bhutan “Butane” and then she tells them the country is located in Africa), and wise too (such as when she points out that “Happiness can’t be willed.”). Linda’s voice ultimately makes the book a pleasure because she’s the one taking you along for the ride — and what a ride it is.

So when Linda told me about her new book A Field Guide to Happiness: What I Learned in Bhutan about Living, Loving, and Waking Up, I was excited to jump into her world once again.

True to its subtitle, this book dishes out Linda’s own personal insights on that universal topic of happiness through a collection of stories from her life in Bhutan (including a LOT of stories that feature her Bhutanese husband, Namgay). But she does it without being too preachy or new age, or even expecting you to, say, complete exercises throughout the book.

Honestly, it’s more like sitting around Linda’s table with a cup of tea in your hands, hearing a friend tell you all about her most vulnerable and ridiculous and embarrassing and even scary moments in life. The lessons you learn along the way feel authentic and relatable, and ultimately will make you think about your own happiness in life.

I’m thrilled to introduce you to Linda Leaming and A Field Guide to Happiness through this interview.

A native of Nashville, Tennessee, Linda Leaming has written pieces for publications including Ladies’ Home Journal, Mandala, Guardian UK and A Woman’s Asia (Travelers’ Tales, 2005). She received her M.F.A. in fiction from the University of Arizona and was even featured in Eric Weiner’s bestselling book The Geography of Bliss. You can learn more about her and her writing (including Married to Bhutan) at her website LindaLeaming.com.

In this interview, I asked Linda a number of questions about A Field Guide to Happiness — including why she chose to explore the idea of happiness through her experiences in Bhutan, how her husband Namgay felt about being featured prominently in the book, and why she choose one of Namgay’s unique paintings for the cover.

While you’ve titled your book A Field Guide to Happiness, it also reads as a love letter to Bhutan (a love letter in the sense that you love this place, warts and all, so to speak). Why did you decide to use your experiences as a way to discuss happiness?

I’ve found a lot of happiness in Bhutan. The first time I came in 1994, I knew I had to get back. It was such a peaceful, calm, quirky, funny, remarkable place. The people were laid back but strong. I decided that I had to live here. It was really hard to pull off, but I couldn’t see my life any other way. The Bhutanese have a lot to teach the rest of the world about how to be happier. They live with less, they live with a spirituality and a sense of themselves that’s conducive to happiness. They believe kindness and compassion are the glue that holds a society together. They’re funny.They take care of their environment. All the things I wrote about in the book are things I learned in Bhutan about how to be happier. But you can do them anywhere and be happier. Or you can find your own things that make you happy.

Your husband Namgay – and your marriage, for that matter — is an important part of this book, as he shows up in the vast majority of the stories you tell. How did Namgay feel about that?

It’s mixed. He’s proud of me and maybe flattered that I choose to write about us. He likes my writing and thinks I write good books.I think he’s also a bit wary because it’s not his nature to be an extrovert and show himself. He’s shy. He thinks what I write about is sufficiently interesting and worth the invasion of our privacy– most of the time.

What part of your book was your favorite part to write and why?

I liked writing about the different relationships — the married couple who divorced but then the wife became close to her ex husband’s new daughter, my own relationship with Namgay, especially the chapter when we encountered the monkeys. Having an intercultural marriage means you have to look at relationships differently, and think differently. End of story. Your relationship won’t survive if you don’t bend. And bend and bend.

I also enjoyed writing the story of the broken washing machine. It’s a good example of being able to bend– or rather to flow.It’s a nice counterpoint to the first chapter and the description of how I felt when I first came to Bhutan: impatient, disgusted, unhappy.

I liked writing the end. Because it was the end haha.

We went to the U.S. because we needed to be there for my family. And Namgay needed to spend some time in the U.S. We had always talked about how we’d spend time there so Namgay could see how I grew up and where I came from. He’s had opportunities to teach and paint and do fellowships in the U.S. and it’s easier for me to publish if I’m in the U.S.

One of the unique features of this book is your cover. You wrote about this in your book, saying, “The front of this book is a painting by Namgay called The Great Game, which he painted when we were coming back from Bhutan from the U.S. I think with his rocket paintings Namgay is reminding himself to be mindful, to wake up. I know he thinks of himself in a rocket, going somewhere really fast, and with no idea where he’s going. He says that’s what he feels like in the U.S.” Why did you choose to put this on your cover?

I love that painting. It’s looks so happy– it’s bright and colorful, but it also has a deeper meaning: It’s the two sides of our lives, East and West, the dragon and rocket. My publisher, Hay House, liked the idea of using his art for the cover, as they did with my first book, Married to Bhutan, and I sent them some images the they actually picked this one. I was thrilled.

If there’s one piece of advice you hope people come away with after reading this book, what would that be?

Happiness is a habit and it’s another word for contentment, and you can have more of it if you treat it like a habit to be cultivated and understand that it comes from inside you, from doing a lot of little things well.

Thanks so much to Linda Leaming for this interview! To learn more about A Field Guide to Happiness (including upcoming book-related events), visit her website at LindaLeaming.com.