I never thought a simple trip to the grocery store with my husband would give me one of the most embarrassing experiences I’ve ever had.

It happened while we were checking out of a grocery store in the US. My husband, as usual, started bagging our stuff while I pulled out my credit card to pay for everything. It was just another typical checkout experience – until the cashier, a white woman in her fifties, started chatting with me.

“Nice to have some help,” she said, referring to my husband who had already bagged everything and placed it neatly in our shopping cart.

“Yeah, he is pretty great.” I couldn’t help but smile with pride. Who doesn’t love it when her husband is the envy of others?

Or so I thought, until the cashier opened her mouth again.

“So, is he your foreign exchange student?”

That’s right – a casher in America actually mistook my own husband for some foreign exchange student I was hosting.

A flush of red mounted my face as I realized exactly what this meant. One, that she had noticed my thirty-something husband was a foreigner and thought he looked old enough to be an undergraduate in college or younger. And two, that she thought I looked too old to be his wife.

She might as well have pointed out every single wrinkle on my thirty-something face, because that’s exactly how embarrassed I felt.

I cleared my throat. “Actually, he’s my husband.”

“Oh, I’m so sorry!” The cashier seemed genuinely apologetic, right down to the way her own cheeks turned a self-conscious shade of scarlet.

But it was too late for that. She’d already put the idea out there. And let me tell you, I never hurried out of a checkout line faster than that moment.

Honestly, I shouldn’t have been surprised. Long before this ever happened, relatives and friends doted on John’s youthful appearance. In fact, it seemed like a month never went by in America without my dad saying, “John, you look like you’re still in high school!” They schooled me a reality that had remained hidden to me until I married an Asian man: the popular belief that Asians look younger than white people.

But until that moment in that checkout line, I was blissfully unaware that some Americans might actually think I was old enough to, say, be a guardian to a foreign exchange student. And might mistake my Asian husband for said student.

Of course, I’m not the only white woman in an AMWF relationship who has had an embarrassingly personal reminder of how Asians look younger than white people, as Constance of Foreign Sanctuary reminds me in her post My Taiwanese Husband & His Most Amazing Moment in Vegas!!:

While dining in Las Vegas a couple of years ago, my 30-something year old husband (who, might I add, is two years older than me) heard the most magical words from a waitress when he tried to order a beer.

Smiling from ear to ear, his dimples as defined as ever, like a kid in a candy store, he turned to me and asked me for his passport which I was holding for safe keeping in my bag.

Talk about inflating someone’s ego with one sentence!

Trying to salvage some dignity, even just a little, I casually asked the following question.

And to add more salt to the wound, to drive the dagger further into my heart, she made the following reply:.

Oh, the humiliation! The embarrassment!

I’ll be honest – for the longest time, I swore I would never go public with this encounter in the grocery store. I wanted it to be like the diary I used to hide under my mattress in grade school, forever safe from scrutiny. Who wants to admit before the world that, in fact, people think she looks old?

Yet, the older I get, the more I realize the importance of accepting myself, warts and all. After all, aging is a reality for everyone. Maybe some of us are lucky enough to look younger (ahem, John), while others are not so lucky (ahem, me!). But in the end, we’re all headed in the same direction.

And honestly, who hasn’t seen the person with the dyed hair that’s obviously there to hide the gray and isn’t fooling anyone? Or someone like the late Joan Rivers, with so much plastic surgery and botox she doesn’t even look real anymore?

I cringe over the extremes we turn to just to hide our real age, when the treatment we really need is simple — accepting ourselves exactly as we are.

I also recognize that looking younger isn’t always what it’s cracked up to be, as Mabel Kwong points out in her post “Asians’ Youthful Looks: A Blessing or A Curse In Disguise?”

Besides, my husband still thinks I’m the sexiest woman in the world. He can’t keep his hands off me – wrinkles and stretch marks and hidden gray hairs and all. He loves me just as passionately as that night over 12 years ago when we first kissed beside the West Lake.

So what if he doesn’t “look” like he matches me in age to some folks? I know he’s my perfect match and that’s all I’ll ever need to know. 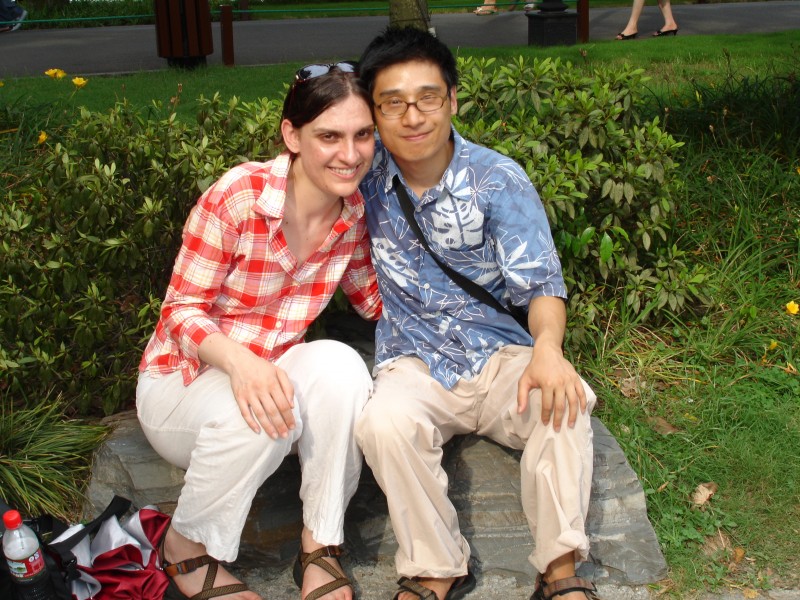 Have you ever had an experience where someone mistook you or your boyfriend/girlfriend or spouse for a different age? How did it make you feel?

P.S.: This post was inspired by Constance’s post My Taiwanese Husband & His Most Amazing Moment in Vegas!! Head over to Constance’s blog Foreign Sanctuary and read her post, as well as the comment section, which is packed with examples of other people who have had embarrassing experiences of their own!

50 Replies to ““Is he your foreign exchange student?” When you’re a white woman who looks older than her Asian husband”