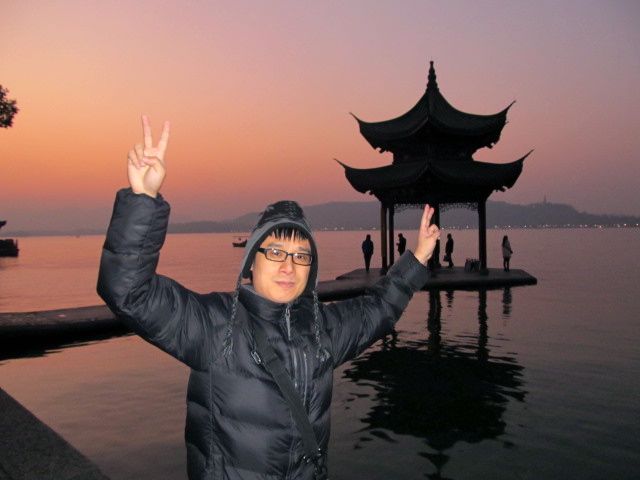 I wrote last week about how marriage changes you – especially when you’re in an international or cross-cultural relationship — and shared 4 habits I’ve learned from my Chinese husband. But I’m not the only one who has picked up a few new habits from my foreign spouse.

What has my husband learned from his white American wife after over 10 years of marriage? Here are 5 examples of his new habits (my personal favorites!):

P.S.: This post was also inspired by a question posted on the AMWF Facebook Group Ichiro & Juliet, run by Ranier Maningding (who is also the guy behind The Love Life of an Asian Guy, one of my favorite blogs).

In the first month or so when I was dating John, I totally stressed over a small – but to me, not unimportant – thing. Here was this guy who had moved in with me and taken care of me in so many ways, far beyond anyone else I had ever met. And yet, he hadn’t really told me those three simple words: “I love you”.

Eventually, he did say it to me when we were standing on a mountaintop (and I was in ridiculous tears about it all). He really seemed to understand, beyond all of my expectations. He even told me it wasn’t silly at all for me to ask him if he could tell me I loved him (which is how it all started).

Anyhow, that was the first time when he learned just how much those three little words meant to me. So much that I showered him with “I love you” in all the usual ways couples in America do. At the end of phone conversations and e-mails, in text messages, when I kissed him and told him good night. Gradually, the idea that his girlfriend, and later, wife, liked hearing it turned “I love you” into a regular and frequent thing from John’s lips.

Of course, some habits don’t entirely change. One thing I have learned is this – that’s it’s a heck of a lot easier for him to say “I love you” because it’s in English. Trying to get him to say the Chinese version, 我爱你 (Wǒ’àinǐ)？Well, I’m still working on that.

“You’ve never had chocolate before?” It was early in my relationship with John when I learned the shocking truth. He had never tasted this most ambrosial of all sweets.

So before Christmas, I bought a generous package of Dove dark chocolates and stuffed them into a stocking I prepared for John. Never did I realize that the moment he popped one of them in his mouth, he had found his second true love in life (the first, of course, being me!).

In that moment, a chocoholic was born. (It’s ironic that it happened with a guy who recalls eating carrots as a child to satisfy his sweet tooth).

My parents, of course, only indulged the habit when we moved to America, plying my husband with the stuff at pretty much every holiday.

So you can guess what was under our tree this past Christmas – and whose eyes sparkled the brightest when that dark, delicious goodness was unwrapped from its foil. Mmmm.

It all started when John and I were living with my parents after moving to America. John is the kind of guy who needs hefty servings of caffeine to get through the day. In China, he always got his fix from black teas or oolong teas (the nice loose leaf varieties that he introduced to me). But my parents don’t do loose leaf tea and, as you can imagine, he never particularly liked anything that came in a teabag.

What my parents did have, however, was coffee. Lots of coffee. They had a brand-new coffeemaker, their own coffee bean grinder, and a tantalizing selection of fine blends, from Sumatran to Italian Roast. “Hey, do you want to try some coffee, John?” my dad asked him one day. So when in America, John figured, do as the Americans (or in this case, his wife’s American parents) do.

He took that first tentative sip, followed by a contented “Ahhhhh!” Not long after, the caffeine kicked in (strong!) and he knew he had solved his caffeine problem in America for good.

He’s been a pretty steady coffee drinker ever since and, after discovering the bold and rich flavor of Starbucks’ Sumatran brand, still swears by Starbucks coffee (and savors the occasional soy latte from our local branch).

Sometimes I can’t believe how much coffee – or, for that matter, caffeine – my husband drinks! He may be shorter than me, but he stands head and shoulders above me when it comes to his caffeine tolerance.

The other day, I was playing some upbeat tunes on my phone – you know, the kind of music that’s so fun you can’t help but swing your hips to it. All of a sudden, my husband got up out of his chair, started mimicking the tune (off-key!) and then turned around to shake his butt. He laughed (because he knows how hilarious he looks when he does this) and I couldn’t help but return the laughter…all the while knowing that I had a hand in much of this.

John didn’t grow up spontaneously jumping up and dancing to a great tune. And I’ve spent enough time in his family home to know that his parents and relatives don’t really do this either. But it’s the kind of thing I do all the time when I’m inspired to move by a great tune.

I can’t remember exactly when I first did this in front of him, but I’m certain he was the one laughing at me (and perhaps wondering what in the heck I was doing). But after years of being together – and even watching all of those American movies where other people would bop to a beat at the spur of the moment – he realized it was a part of who I was. And learned that it could be fun too.

So every time he shakes his butt to a tune (and giggles about it), I can’t help but giggle along with him, knowing that he’s embraced something that’s a part of me.

5. Using a heated mattress pad to stay warm in bed

The first time I ever stayed at John’s family home years ago, his mother handed me only one thick comforter to make it through the winter’s night in their drafty, unheated house. Being used to lots of covers on my bed and a warm heating vent somewhere near the floor, it was such a shock to my body that I caught quite the cold before leaving.

At the time, John, my then boyfriend and now husband, was stunned. I can’t remember his exact words, but they went something along the lines of, “You weren’t warm enough?”

Growing up, he and his family never used more than a comforter on their beds to sleep through the winter. And of course, they never, ever thought of using things like a heated electric mattress pad to stay warm and cozy.

You can imagine, then, that John and I struggled for a period of time when it came to sharing a bed together – with me trying to pile on the covers (and anything else to help stay warm) and him complaining he felt too hot.

Well, we eventually moved to America for a time and during our first Christmas there, my parents gave us an electric blanket. When we brought the electric blanket home, John surprised me by letting me plug it in for the night. And then he further surprised me when, after crawling into bed (a nice, toasty warm bed like nothing before), he couldn’t stop smiling and telling me how great it was.

The last thing I ever expected was for the one-comforter guy to suddenly love electric blankets.

What habits has your spouse learned from you?