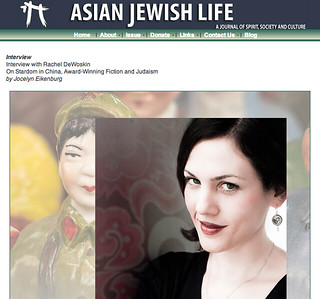 This week, my interview with writer Rachel DeWoskin just hit the presses at Asian Jewish Life! Many of you already know Rachel through her beloved memoir Foreign Babes in Beijing or her debut novel Repeat After Me (two of the quintessential books featuring foreign women who find love in China).

Here’s the intro to the interview:

During the mid-1990s, Rachel DeWoskin first dazzled audiences as the unlikely star of the Chinese soap opera Foreign Babes in Beijing — an experience she captured in her 2005 memoir of the same title, exploring life and love (both onscreen and off) in a changing China. Foreign Babes in Beijing has been published in six different countries and is currently being developed as a television series for HBO.

More recently, Rachel DeWoskin has dazzled readers with her award winning fiction set in Asia and beyond, exploring themes such as sameness and difference, empathy, women’s relationships and the Jewish experience. Her 2009 debut novel Repeat After Me won a Forward Magazine Book of the Year Award. Big Girl Small, her 2011 novel, received the 2012 American Library Association’s Alex Award and was named one of the top three books of 2011 by Newsday. Rachel DeWoskin was also the 2011 recipient of a three-month M Literary Residency in Shanghai, where she completed the screenplay for American Concubine and was inspired to develop a forthcoming novel to be set in Shanghai.

While Rachel DeWoskin currently resides in Chicago, where she is a faculty member in the Creative Writing Department at the University of Chicago, she returns to China every year and considers Beijing a second home.

Asian Jewish Life sat down with Rachel DeWoskin to learn more about her ongoing relationship with China, her forthcoming novels and screenplay, and her interest in exploring Judaism — including in Asia — through her writing.

Read the full interview online at Asian Jewish Life. And as always,  if you love it, share it!