By the end of January, 2003, I had lived in China for more than two and a half years, spoke fluent Mandarin Chinese, and had John, my Chinese boyfriend. It’s easy to believe you know China, that it feels familiar and comfortable when you settle in one place, and have close loved ones by your side.

But the Chinese know better. Lin Yutang once wrote that the happiest thing for a Chinese is to return to his hometown, and speak in his local dialect. Outside of their home region, even a Chinese could feel like a foreigner, lost in a world where no one speaks their home dialect, or eats the local delicacies they loved as a child. Sometimes, you only have a cross a mountain or two in China to find yourself in a completely different world.

John and I crossed many a mountain to reach his village in the countryside of Tonglu, and I couldn’t have felt more strange. I was already a stranger to his parents. But I also faced a home and village that was like nothing I’d known before — even in China. END_OF_DOCUMENT_TOKEN_TO_BE_REPLACED

John loves this expression, and has told it to me many times in our relationship. There is truth to it. Huangshan is an impressive mountain, and has a greater scale than China’s Five Sacred Mountains — Songshan, Hengshan, Hengshan, Huashan, and Taishan. But many would argue that the Five Sacred Mountains have their own beauty, and a beauty worth seeing, even if you have visited Huangshan. I don’t mention this to John, because I know his words say more about him than Huangshan. He loves Huangshan, because his relatives lived in the shadow of its enormous spires. His people are mountain people, and come from a mountain that claims to overshadow the rest.

Though he didn’t grow up at the feet of Huangshan, he was born and raised in the mountains just southeast of Huangshan. On the top level of a double-decker bus, on a sultry summer evening in 2002, he turns to me and speaks of the beauty of the mountains in his hometown. “My hometown is a tourist destination,” he says proudly. He tells me it is Tonglu, but I have never heard of it. “We have mountains, rivers, and caves,” he says. And then he smiles gently and adds this: “You’re welcome to visit anytime.”

I don’t visit his village until six months after that — during Chinese New Year, 2003. END_OF_DOCUMENT_TOKEN_TO_BE_REPLACED

After the remark from John’s father — that foreign women make good friends, not girlfriends — I needed something to make a fresh start with his family. That’s what I told Caroline, my Chinese friend, days before John and I would travel to his countryside home. We had just had dinner together that evening, and on our post-meal stroll, came across the tiny, brightly-lit store of a tailor I knew all too well.

My eyes twinkled like a child before the tantalizing toys in a Christmas store window display. “She’s the one who made my qipao.” The same qipao I wore for my birthday celebration the summer John and I fell in love. “Let’s go inside and take a look.” END_OF_DOCUMENT_TOKEN_TO_BE_REPLACED

How did I spend this Chinese New Year? As a host — along with my Chinese husband, John — for our university’s “Chinese Night” on Feb 13, 2010, here in the mountain West of the US. It’s not CCTV’s Spring Festival Party (perhaps, thankfully so!), but it’ll do. 😉

We had more than 12 programs to entertain the audience that evening. Here are a few of my own favorites. END_OF_DOCUMENT_TOKEN_TO_BE_REPLACED

This coming Chinese New Year is the year of the tiger. It’s about being bold and adventurous, and taking risks.

So, I’d like to be a little bold and offer you a gift of my own: a downloadable picture of the Chinese character hu (è™Ž), which means tiger. This is an original, hand-drawn piece done by my father-in-law, who enjoys calligraphy in his spare time.

Interested in getting an original? Okay, let’s get even more bold.

I have five originals with the character for tiger, available for readers. All you have to do is be one of the first five people to comment on this post. I will then contact you by e-mail to get your address, and drop it in the mail — wherever you are in the world, free of charge.

Happy Year of the Tiger! 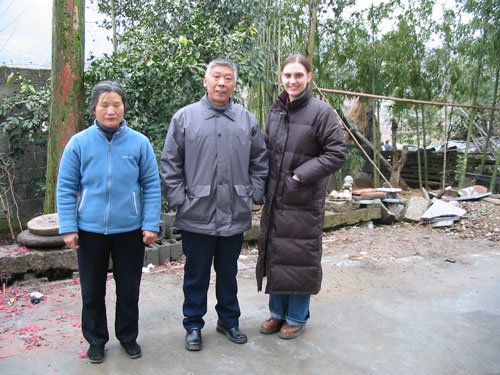 I started teaching English in China this past fall, and met a wonderful Chinese man. I never expected to have a Chinese boyfriend, or expected it so soon! But we’ve been dating since October, and are very much in love.

However, I am really starting to freak out because he asked me to spend Chinese New Year at his parents home. I am so concerned about meeting his parents. I know family is a really big deal in China, and it seems that if they don’t like me, my boyfriend and I don’t have a future. I really need to impress them! I’ve only started learning Mandarin, so I’m barely proficient, but I guess a little is better than none at all.

I’m definitely going to bring gifts (thanks so much for the great suggestions!).

But I was wondering what other advice you might have — specifically, what should I do to make the visit go smoothly? I really could use some help! Thanks!
—– END_OF_DOCUMENT_TOKEN_TO_BE_REPLACED

I wrote this piece five years ago, but it still rings true. If you miss the holiday atmosphere in January, after Christmas and New Year’s Eve, then you should be in China.

It was early afternoon, and the little Luwan Food Store in Shanghai was belching out patrons left and right. We felt the squeeze as we waited in line for the sesame seed/walnut powder. I was taken by one man who bought two large containers, and slipped them into a black valise that seemed more fitting for someone in the secret service. The people behind John and I impatiently nudged us forward.

The ladies behind the counter just beyond that — the one for Chinese tonics and herbs, everything from ginseng to swallow saliva — bustled back and forth, handing the remedies over to customers in the smart, glossy red packages. Even the tea department brewed with energy. Several men hunched over a counter displaying an assortment of dried and cured leaves in a spectrum of greens, browns and black.

When John and I returned to Huaihai Road — the “Fifth Avenue” of Shanghai — we plunged into a odd gallery of late-season holiday decorations in the store windows. Tinsel, Christmas trees and images of Santa Claus all contradicted the reality that Christmas was already over. Even department stores broadcasted Christmas carols in the background.

This is January in China’s big cities: still frosted with holiday flavor, and still a consumer frenzy that would rival the Christmas shopping season. END_OF_DOCUMENT_TOKEN_TO_BE_REPLACED