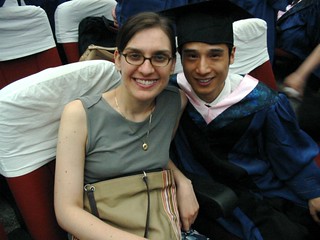 In this week’s Ask the Yangxifu, I feature not one but three different questions from the mailbag — and invite you to weigh in with your own advice!

“Katie” wrote that she met a Chinese research assistant with a PhD at a nearby university in North America, but is frustrated because he’s so busy and often cancels their plans. “I want to somehow tell him that I feel frustrated that he can’t find a good time to hang out with me, but I was wondering if you might have any ideas or suggestions on how to do it without causing him to disappear.”

My husband’s graduate education in the US has schooled me in the many challenges that Chinese face when they choose to study or do research abroad. We’ve all heard the jokes that PhD stands for “piled higher and deeper” and all the horror stories of graduate student life. Well, on top of the usual obstacles of graduate/research life, Chinese also have to navigate their education in a foreign language and culture and often encounter discrimination. That means they have to work even harder and longer than their North American counterparts — and when you’re challenged like that, something (i.e., social life) sometimes has to give. Look, I lived with my husband during his education and some days I wouldn’t even see him until late at night or during mealtimes; even our weekend movie date nights weren’t always a sure thing if he had a major deadline or project coming up.

You may feel frustrated with him for cancelling on you, but chances are he’s more challenged than you actually know — and might have valid reasons for bailing on you.

Instead, you might consider reaching out to him as a friend and offering a little help that any overworked research assistant could use. For example, even the busiest people in academic settings still have to eat. Why not offer to bring him some dinner or a snack on those late nights or weekends? It would give you an excuse to contact him while showing him you care at the same time, as long as you don’t overdo it.

Also, why not ask him about his plans for the upcoming holidays? Universities quiet down, right down to research projects, meaning he’s less likely to back out at the last minute.

“Christine”, a Western woman in China, is interested in a local Chinese guy, but she’s afraid to spend too much time with him and potentially scare him off and lose him as a friend. “What do you think I should do? Should I just continue having less contact with him because we cannot hang out in a group as often or should I push the boat out and invite him to hang out alone more often? And, if so, what kind of activities do you think would be appropriate for male and female friends to do together in China without it seeming overtly like a date?”

Here’s a thought — have you considered perhaps proposing some group activities with him and his friends? For example, you could say you wanted to meet his friends (male or female) and thought it might be fun to do something together as a group (like sing karaoke or have dinner or play sports such as badminton or table tennis). That way, you could hang out with him but it’s definitely not a date. Chinese often go out together in groups, and it’s not uncommon for people to introduce others in group settings as well (to, of course, avoid the pressure of a date). It would also give you the opportunity to meet more locals your age. Plus, if you make friends with his friends, you’ll learn more about him — and potentially, they might help bring you two together.

“Maya” asks, “What’s the difference between dating an American-born Chinese versus dating a FOB [someone born and raised in China]?”

I’ll leave this answer to Ranier Maningding of The Love Life of an Asian Guy, who essentially sums it up this way:

Unless you can tell that an Asian-American guy is VERY attached to his cultural values and customs, treat him like you would every other American citizen….

If he’s an Asian Immigrant, just ask him a bunch of questions and figure out how “Asian” he really is. Get a better understanding of how he feels about his culture because when you think about it, if he is an immigrant, he chose to immigrate to your country for a reason. Maybe that reason is because he dislikes his culture and is seeking a better opportunity – or maybe he just likes Black girls.

And don’t miss Ranier’s entire entry, which will leave you both entertained and enlightened!

Do you have a question about life, dating, marriage and family in China/Chinese culture or Western culture? Send me yours today.

11 Replies to “Ask the Yangxifu: Chinese Researchers, Group Dating, and ABCs vs. FOBs”