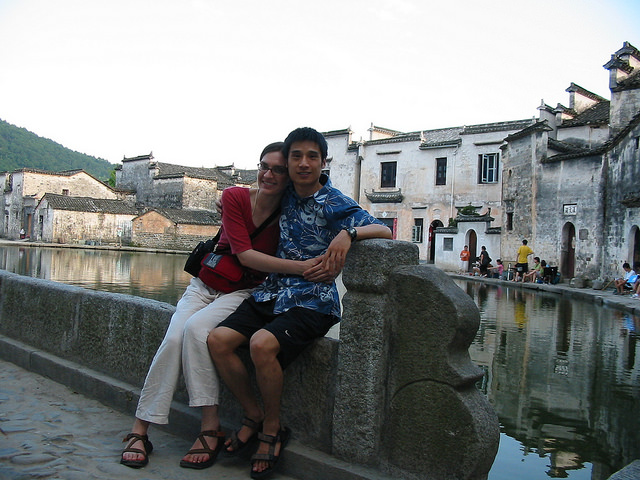 I have been reading your blog for some time now and the majority of your female readers are independent, intelligent women whom have (some) “feminist” values/ideas such as equality, rights, freedom of choice.

I would like to know has being married to a Chinese man and to the Chinese “extended family” changed your…“feminist” ( independent ) views? Did you have to change your way of thinking and adapt to situations, traditions, culture that may not share your own ideas and beliefs? Do you accept things in China that you wouldn’t accept back in your own country? If so how did/do you handle this? How does it make you feel?

I thought about this question for many weeks and could never seem to come up with the right answer. And then I realized the issue here — the thing is, my marriage to John hasn’t really changed my core feminist/independent views all that much.

See, I married a feminist guy who just happens to come from the countryside of Zhejiang, China, as I’ve written before:

Over the years, from dating through marriage, John continued to blast stereotypes about Chinese men, that they’re so sexist. He loved my larger, curvier body in all of its beautiful imperfections, and never suggested I change a thing. During all those times when I was the family breadwinner, he always felt proud of me and my ability to make a living. He grew up in a household where no one hit women and children, and condemned domestic violence in all of its forms. He kept doing the dishes and his share of the housework, and never assigned a gender role to any household chores.

John has always loved me just as I am and always supported me in my endeavors, even when it comes to writing about him and our marriage together. In fact, if it wasn’t for him, I wouldn’t be writing this blog at all!

As for his family, sure, not everyone is as progressive as he is. But that doesn’t mean that I’ve had to somehow change myself to fit their expectations. We can disagree. And if we do, I usually say something to them. It might surprise you, but I find it far easier to speak up in front of his family as opposed to my own in the States. Perhaps it’s because foreigners in China are expected to be a little weird and get a pass when we do things differently. Maybe it’s because I’m speaking to them in a foreign language, which liberates me because it’s not the language I grew up with. And it probably helps that John’s parents (and most of his family) don’t fit those stereotypes of the strict and conservative Chinese family.

Of course, there are things about Chinese culture that, on the surface, seem to clash with feminist/independent views. Take for example the dependency among family members in China and the expectation that children should care for their parents when they’re older. Yet, some families in the US do these things too. My dad invited his father (my grandfather) to spend his final years living together with him, and my aunts and uncles take care of my grandmother so she doesn’t have to stay in a nursing home. As independent and feminist as I am, I still believe these are good values and would want to do the same if John’s parents needed our help.

And ultimately, there’s a difference between understanding a culture and completely overhauling your own views for someone else. It’s important to know and respect your partner’s culture, but that doesn’t mean you have to hide who you are to do it. Otherwise, you’re just dealing with a one-sided relationship and those are usually doomed to fail. Just as I’ve become closer to John’s culture, he’s also become closer to mine — and the whole process has only made our marriage that much stronger. Yet when it comes to our beliefs and our way of thinking, we’re still pretty much the same as we were all those years before when we first met.

Maybe my marriage really is unusual. And maybe to some people I might not seem “independent enough” or even “feminist enough”. But then again, that should tell you that there are no hard or fast rules for cross-cultural marriages in China or even what defines a woman as independent and feminist.

Sometimes, you really can find happily ever after in the most unlikely places in the world. 😉

How about you? How would you respond to this question?

Do you have a question about life, dating, marriage and family in China/Chinese culture or Western culture? Send me yours today.

13 Replies to “Ask the Yangxifu: Has marriage to a Chinese man changed your feminist views?”