Of all the memoirs by Western women who loved Asian men (and wrote about it), The House on Dream Street by Dana Sachs remains one of my favorites. The writing is exquisite, but more importantly she shares her own vulnerabilities on the page and becomes one of the most delightful narrators I’ve ever encountered.

So imagine my excitement when I discovered that Dana came out with a new novel this year called The Secret of the Nightingale Palace featuring not one, but two stories about Asian men and white women falling in love. The romance at the heart of this novel — which relates to its intriguing title — just stole my heart away. Plus, the book explores a side of World War II that we all too often forget — the US internment of Japanese Americans.

I’m thrilled and honored to have this opportunity to interview Dana Sachs about The Secret of the Nightingale Palace.

Dana is also the author of  the novel If You Lived Here and the nonfiction narrative The Life We Were Given: Operation Babylift, International Adoption, and the Children of War in Vietnam, and co-authored the book Two Cakes Fit for a King: Folktales from Vietnam along with Nguyen Nguyet Cam and Bui Hoai Mai. Both The House on Dream Street and If You Lived Here were chosen as Book Sense Picks. 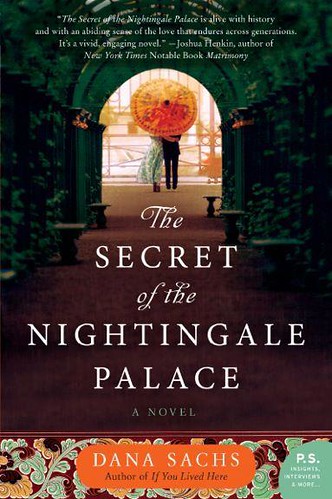 Could you talk about your inspiration — if any — for the Asian male love interests in the book?

Well, not specifically! That sounds like the kind of thing we need to do in person, over coffee or margaritas. But I can speak in a general way. As a writer, I’m drawn toward Asian characters for several reasons. First, because I’ve spent so much time living in Asia, particularly in Vietnam, I feel comfortable writing about that part of the world and, to a certain extent, people from there. Second, each time I have an opportunity to introduce a new character, I think about ways to make that character interesting and, just as important, to make the interaction between several characters interesting as well. When characters come from different background, they have qualities that can be mysterious or even confounding to each other. In my own experience, that’s one of the fascinating things about travel—you meet different kinds of people and you face the challenge of trying to understand each other. Since I’ve spent so much time in Asia, that’s a natural direction for me to move in.

Henry, one of the Asian love interests, struck me as the sexiest guy in the entire book — which you really don’t see often enough in books or the media. Overall, it was refreshing to see Asian men written without all the usual stereotypes thrown in. Could you talk about how you approached the characterization of these Asian men — and what you hoped to accomplish through the characters?

Well, I do try to stay away from stereotypes, but more than that I’m focusing on doing two things at once. First, you can’t forget the qualities that make each person unique. Second, you have to focus on the fact that they are human, too. Each person is at the center of their own world, which means that their perspective has to have a logic to it that feels authentic. For example, Naveen is an Indian American, but the “Indian” part of his identity sometimes dominates the way people see him the United States. Even though he was born in the U.S., he has to deal with people asking him “where are you from?” simply because he has dark skin. So his experience in the world is affected by how people perceive him when he walks down the street. Similarly, when Henry, a Japanese-American, walks through San Francisco during World War II, he feels the resentment of the Caucasians around him. He can’t escape it, so that experience has to be central to how he sees himself in the world, the choices he makes, and his joys and frustrations. Writing about people who are different from yourself is an exercise in empathy.

What inspired you to set this story during WWII and highlight the Japanese-American experience during that time?

I think that when Americans talk about WWII, our attention generally moves toward Europe. What happened to the Japanese in this country, however, complicates our easy sense of who were the “good guys” and “bad guys” during that time. The United States, I believe, was fighting on the right side of the war, but also making terrible ethical mistakes here at home. In what ways were we blinded by our own fear? At what point do those fears make us do the wrong things? Those questions interest me.

The novel you feature a number of conversations about stereotypes and prejudices, particularly during the part of the novel set in World War II. Could you talk about the research you did to understand how people would have talked about race/ethnicity back then, and what you did to make those conversations as authentic as possible?

Because I’m Jewish, and have heard stories about my family back then, I had some ideas about how Jewish Americans might think about what was happening in Europe at that time. I believe that each person’s reaction comes out of their unique perspective as an individual, though. When Goldie, a Jew, and Henry, a Japanese American, talk about the war, their conversation says a lot about who they are as individuals. Henry is very engaged, while Goldie, in a way, tries ignore what’s happening. That’s really just who they are as people. As for research, books were great in helping me understand complex issues. Often, though, the primary documents had the most powerful effect on me. For example, the anti-Japanese wartime posters of the period were supposed to be funny, I guess, but they are appallingly racist. Also, I read the U.S. government directives about the internment of Japanese Americans after Pearl Harbor. Because I already had the characters of Henry and his family in my head, I tried to read those directives from their points of view and the effect is terrifying. That kind of research certainly helped.

What message or messages do you hope people come away with after reading your book?

Oh, that’s a hard question. One of the things that I keep coming back to, though, is the fact that this is a book about secrets—the secrets we keep from the people whom we love and, also, the secrets that we keep from ourselves. We’ve all heard family stories that seem confusing or somehow incomplete. In what ways did our parents and grandparents keep information from us, either for our own good or to protect themselves? Similarly, how do we lie to our children or try to control the ways in which they see their family and the world? I think these are important questions to consider. On another level, all of my books have represented an effort, in one way or another, to look at the ways in which we as human beings try, and often fail, to understand each other. Personally, I see this most obviously in the troubles that arise between people of different backgrounds and races, but even sisters and brothers can fail to relate. I keep coming back to that in my work because I think I’m always trying to sort through it myself.

My thanks to Dana Sachs for this interview about her latest novel The Secret of the Nightingale Palace. And if you’re new to Dana’s work, don’t miss The House on Dream Street — her lovely memoir about living in Vietnam in the 1990s and her unlikely love affair with a Vietnamese man.

10 Replies to “Dana Sachs Interview: The Secret of the Nightingale Palace”