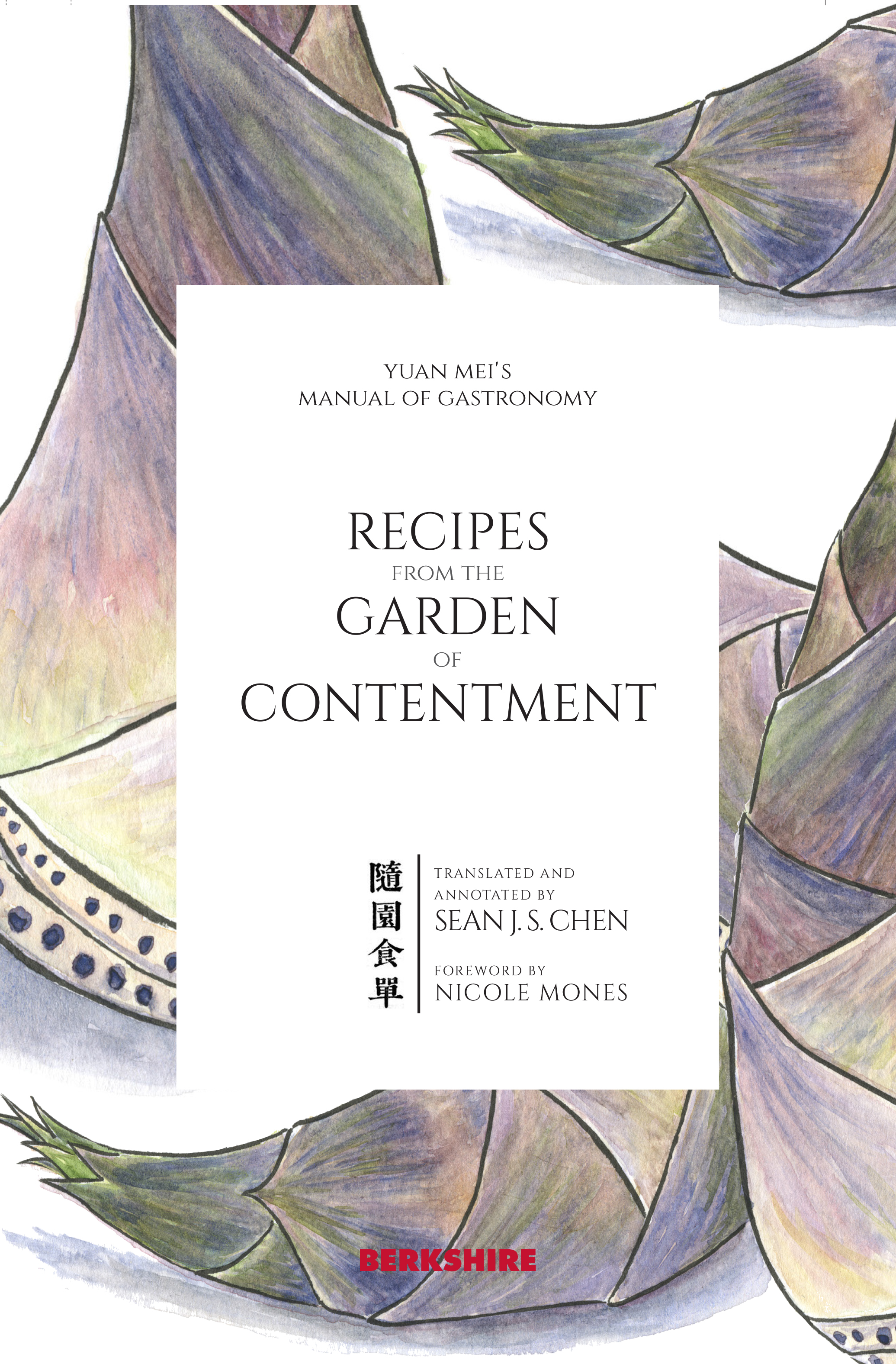 Chinese cuisine has endured for thousands of years — a rich, diverse gastronomic cultural heritage that offers much to explore for foodies, chefs, scholars and anyone else eager to trace the flavors behind every meal.

Anyone passionate about Chinese food has reason to celebrate — thanks to the fact that one of the seminal classics of Chinese gastronomy has now been translated into English for the first time: Recipes From the Garden of Contentment (or Suiyuan Shidan, 随园食单), translated by Sean Chen, and published by Berkshire Publishing.

This monumental work first published in the late 18th century by the Qing Dynasty poet Yuan Mei, considered one of the greatest Chinese food writers, has long been hailed as one of the most important guides to Chinese culinary philosophy. You could arguably call it the Bible of Chinese gastronomy, as well as a window into China’s culinary past.

This first-ever translation finally makes this literary classic accessible to an English-speaking audience. Additionally, anyone with an interest both in Chinese food and the language will treasure the fact that the book provides the original Chinese beside the English translation, with copious footnotes that offer delicious tidbits about Chinese culture and cuisine.

Even the book’s recipes, which are mainly rough sketches, will surely inspire seasoned chefs to push their cooking skills further. Sean, the translator, recommends a number of these classic recipes that readers could replicate with good results in the kitchen. The more ambitious might even turn those recipes into a Yuan Mei-themed dinner party for friends, sharing at the table flavors first recorded over 200 years ago.

I highly recommend this book to anyone with a deep and abiding love for Chinese cuisine.

It’s my great pleasure and honor to introduce you to Recipes From the Garden of Contentment through this interview with translator Sean Chen.

Translator and annotator Sean Jy-Shyang Chen is a scientific developer for computer assisted minimally invasive neurosurgery. This is his first publication outside the fields of science and engineering.

(Note: In this interview, I refer to the book as Suiyuan Shidan, the pinyin of its original Chinese title.)

When you began this project, were you surprised that no English translation previously existed for this seminal work?

I found it very surprising considering how often it was mentioned in both English and Chinese culinary and academic works. To be honest, I’m still a bit baffled that no one decided to translate it before me, though if I were to venture a guess, it may be because many in the past saw topics on food culture as frivolous and less worthwhile for serious study. Thankfully this has changed over the last 10 or 20 years.

How long did it take you to complete the entire translation? What was the most challenging aspect of the process?

The translation and research done for the annotation took the more than 4 years with another year spent on re-transcribing from the original 1792 text.

At the beginning of the project the most challenging aspect was learning and understanding the classical Chinese text, then finding the right tone and methodology to translate it. However, as I became more proficient in classical Chinese, what ended up taking much of the time is decoding the recipes, figuring out obscure terms for noting things such as anatomy or time units. There was this “white tendon”, that had to be cleaned from fish that took a lot of research. A lot of time was also spent in figuring out the the scientific names of the animals and plants referred in the book.

Of course, tracking down two copies of the 1792 edition of the book was also a large challenge. One of them had many printing defects and damage which made a second copy essential to correct the errors. Then, there was the actual process of transcribing the text in the images to computer UNICODE characters of the same form as that seen in the original text. This was more tedious than difficult, but doing it was arguably the least fun part of the project. Still it made the book and work significantly better as a result.

Could you share some of the more fascinating things you’ve learned about Chinese gastronomy through the process of translating Suiyuan Shidan?

A huge amount actually on the preferences of Yuan Mei, how he likes his food prepared. But more, one also notices that what what was eaten and cooked in the past is very similar to what is eaten now and that there is something of an unbroken lineage between the two.

Furthermore, that there are large influences of other cultures on Chinese cuisine, Central Asia and the Middle East all the way to Europe. One sees that fusion cuisine is not some new and modern thing, but has been continuously synthesizing and growing organically for centuries.

The first two chapters for the do’s and don’ts of Chinese gastronomy and cuisine actually shine a lot of light on what makes Chinese cuisine unique when you compare it with the gastronomical works of other cultures. It is the “must read” of this book. Still one also notices how applicable some of the ideas in these chapters are to modern cuisines of the West.

I also noticed how sugar was used as topping in many chicken dishes in that time period, several of them also being seasoned with sugar. Perhaps there is something in the Chinese gastronomic psyche for sweet-tasting chicken dishes, which we see manifested in dishes like sanbeiji or the pan-American honey-garlic chicken.

In the introduction, you referenced “Yuan Mei’s literary style and humor” and the importance of capturing that in the translation. Could you tell us some of your favorite examples of his style and/or humor that you particularly enjoyed?

Yuan Mei’s humor comes in two forms in the book: 1) as funny anecdotes and stories or 2) sharp stinging jabs at people he doesn’t like, which are both found throughout the book. My favorite, which combines these two, is a story Yuan Mei recounts of a pompous banquet thrown by prefecture head where they served huge quantities of expensive bird’s nests, no doubt for the head to make a statement and to impress the guests. The problem was the bird’s nests were only cooked in water. Considering that preparing bird’s nest is a laborious process, involving meticulous cleaning and a multiple infusion of flavors to make it enjoyable, bird’s nest in water is basically a raw ingredient for a dish. In fact, eating it would have been unappetizing, if not a bit disgusting. But while all the guests were lauding and praising the host for the bird’s nest, Yuan Mei was not impressed. In his usual “take no prisoners” fashion, he told the host out loud: “Hey, I came here to eat bird’s nest, not to collect and stock it for resale.”

While this is primarily a book of gastronomy and the vast majority of recipes are rough sketches, you do recommend a number of recipes that people could follow with good results. Could you share one you particularly like?

My favorite, which I have made several times is Chicken “congee”. It is essentially a chicken soup thickened with starch, with chicken shredded so finely that the meat looks like the cooked rice grains in congee. This dish typifies haut-de-gamme Chinese cuisine, where taste and texture is refined and delectable, but it is concealed under the guise of a simple bowl of rice congee, at least on a first glance. It’s very Chinese literati chic.

What do you hope people come away with after reading your translation of Suiyuan Shidan?

I want people to use it not just as a cookbook or a gastronomic guide, but as a window to the past, showing us the foods eaten by people of that time, from the imperial officials to commoners, and how truly cosmopolitan many of the foods were. By looking at the dishes, we also see the Chinese dishes eaten today have deep roots going back centuries and are in someways timeless. As well, in setting out the principles of Chinese gastronomy and culinary theory in the first two chapters, we can also begin to see what makes Chinese food culture and gastronomy unique. Like all great works I think, one could read the Suiyuan Shidan under different context and learn different things from it; a chef reading it will learn as will a scholar studying food-ways or history. Hopefully the reader will see from it the heritage, elegance, and art of Chinese cuisine from the translated work and be inspired and spurred on to learn more about it.

6 Replies to “‘Recipes From the Garden of Contentment’ (随园食单): 1st English Translation of Seminal Guide to Chinese Gastronomy”