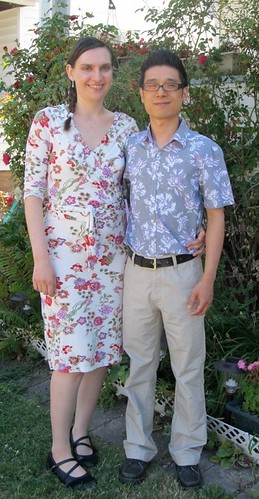 The other day, my husband and I were having a conversation in the car about discrimination and racism in America — two things he knew firsthand from his own experiences over here.

“Mean and wicked, that’s what these people were to me,” he said, referring to the Americans who had betrayed him in the past. “They just don’t care, they have no concern for you at all. They think they can just bully you.”

My heart ached to see him this way. “I’m so sorry. It just goes to show how much work in this country is still undone. We Americans have a lot to learn.”

“Don’t say ‘we’! Don’t put yourself in the same category as them, you should be careful of your language!”

But his words haunted me the rest of the way home. I couldn’t believe that the word “we” — a word that normally brings John and I together as one — could divide us into two in a completely different context.

In a cross-cultural marriage, sometimes it’s easy to feel as if the two of you stand on opposite ends of the battlefield. How many times have I heard from the American media about how “China is stealing our American jobs” or any number of negative news stories that pit China against the US? Not even Chinese media and their occasional stories about the US interfering in China’s affairs could ever compare to what hits the American presses, though they only reinforce the feeling of being caught in the line of fire. Still, the most deadly blows come when fellow Americans — people John and I trusted to do the right thing — mistreat my husband in unthinkable ways.

But John is the man I married, the one I love more than anyone in this world, and he just happens to be Chinese. And I am his wife, who just happens to be European-American. I never intended to draw lines or distinctions between us, and never saw him as anything but my equal.

So that’s why, when we finally returned home, I turned to him and looked straight into his eyes. “You know Sweetie, I know this is really hard for you. It’s hard for me too. But you should know that I’m not against you — I’ve always been on your team, and I always will be.”

John responded with a smile that radiated optimism and hope, one that lifted me up as much as my words must have lifted him up. And maybe that’s the magic of “team spirit” — having someone who will encourage you when you need it most, and energize you to move forward with courage.

38 Replies to “Despite the China-America Divide, We’re On The Same Team”