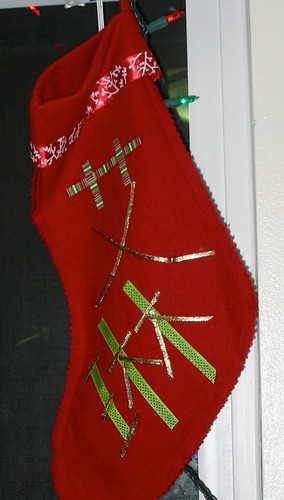 John never looked more upset the moment I lifted our artificial Christmas tree — up and out of the living room.

“What are you doing? Don’t move that,” he said.

“But it’s embarrassing,” I said, not glancing back at him as I carried it into our bedroom. “Just think if our guest saw it.”

“Nobody cares, just leave it out.”

“Look, this isn’t just another Chinese New Year decoration you just hang up all year long.” I glared at him as I said it, the kind of glare that says, “Don’t even try winning this argument.”

Outside, the sun’s rays turned the field across from our place into a shimmering green, where the crack of baseball bats and the barking of dogs trailed by owners in shorts and T-shirts reminded me the holidays had long gone. But you wouldn’t know it by the Christmas tree, stockings and string of holiday lights in our home — decorations that, to my Chinese husband, deserved a place in our home the entire year, just like the red couplets or “Good Fortune” characters decorating the homes of most Chinese.

Blame it on me. Didn’t I dub Christmas “The Chinese New Year of the West?” I wanted John to feel closer to the holiday, and to understand that it meant as much to us as Chinese New Year meant to him, a holiday that even he looked forward to all year round as a child. So when John suggested leaving up our Christmas decorations until Chinese New Year ended, of course I agreed. What better way to reflect our family’s traditions than by honoring both of our holidays together, from the day after Thanksgiving to the end of the first month of the Chinese New Year?

But I forgot about one critical difference between our respective holidays — unlike their Christmas counterparts, Chinese New Year decorations never come down. In John’s family, the auspicious couplets his father writes on red paper stay pasted by the door the whole year, only to be replaced by a new set, a set that reflected that new year and its new zodiac animal. They don’t have a stash of keepsake Chinese New Year decorations, like the ornaments we made in elementary school or the Christmas stockings my mom knit by hand for my sister and I. For me, half the fun of each year involved the “rediscovery” of all our Christmas treasures. Did I cherish my mom’s Christmas stocking even less because it hung over John’s head all the time?

Besides, what would this guest think if she saw our Christmas decorations still out? She was an American, and most Americans, just like my stepmother, would have put away their Christmas things by the first week of January. Any longer than that and you ventured into honest-to-goodness freak territory — like the neighbor who kept his wreath hanging on the side of his house all year round, and looked to us like a real-life bizarro hiding a secret Stephen King kind of life behind his doors. Even though I never shied away from being different throughout my entire life, well, I just didn’t want that kind of different, staring my guest in the face in our living room.

In the end, I put my foot down — and put that tree away, along with the condoms, that ugly brown box filled with snacks, and almost everything else I considered too embarrassing for a guest. That evening, we had a fantastic time with the woman we invited over, who loved the food we made — and hoped to return the favor by inviting us to her place.

But it wasn’t until weeks after the fact that I explained to John the problem with Christmas decorations in the summer. After I told him, he laughed in realization. “Now I understand,” he said.

But the truth is, I understand him too, in a way. I know why he wanted those Christmas decorations up all year — because he believed they brought us good fortune, just like those his family would put up around their home every year. So I conceded one thing, or rather, a few — I let him keep the Christmas stockings out and that string of lights, which most people never really notice anyway because they’re in the corner. And if anyone asks me this summer, well, I’ll just smile and say, “Haven’t you heard of Christmas in July?” 😉

Have you and someone you loved ever misinterpreted the meaning of a holiday (or its decorations)?

15 Replies to “From Chinese New Year To Christmas in July?”