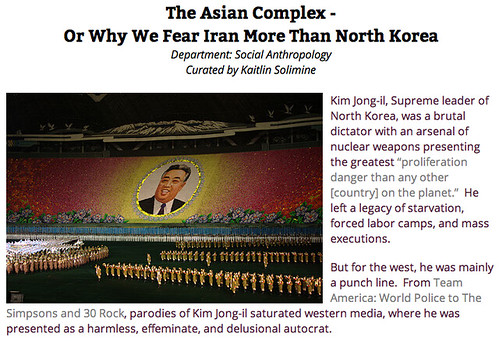 I’ve written a lot here about negative stereotypes about Asian men and how they may affect why fewer Western women seem interested in dating Asians. That’s why I was thrilled when, months ago, Kaitlin Solimine (a gifted writer whose work is also included in Unsavory Elements — many have considered her essay one of the standouts of the anthology) told me she was working on a topic about US-Asia military politics and how it might relate to the “Asian Mystique” as described in Sheridan Prasso’s book of the same name (a book I quoted from a number of times, including in my most popular post to date on the rarity of couples of Western women and Chinese men).

Just last week, she unveiled her post on HIPPOReads, a smart blog with a literary bent — and it’s definitely worth a read.

She covers the ideas of how Asian men are stereotyped — even pointing to PSY as an example — and also goes on to pose some questions that have crossed my mind:

How do such stereotypes impact foreign policy and furthermore, what is the lasting impact of those stereotypes? In this study on school adjustment of Asian-American children, for example, the idea of being a “model minority” can actually have harmful impacts on school-aged children. And with the Asian population said to grow from 5 percent to 9 percent of the U.S. population by 2050 (U.S. Census Bureau, 2008), the ways in which stereotypes are perpetuated will have long-reaching consequences.

Equally important is the relationship between stereotypes and fear—Professor Petra Hesse argues in this Center for Media Literacy post that by stereotyping enemies it’s easier to morally justify violence against them.

Let me add to that a more personal question — how might these stereotypes affect a cross-cultural marriage or relationship like mine? While I didn’t see John through a harmful and distorted lens, I’ve come to learn over time that many others do, and that resulting prejudice has resulted in severe wrongdoing towards my husband. It echoes what Kaitlin referred to as “the long-reaching consequences” on a personal level. Again, I can’t share details, but I can tell you I’m hard at work on a paper (which may potentially morph into an academic publication and/or workshop, with the support of a local professor interested in issues of modern racism and prejudice) that might start a new conversation.

(Thanks to Kaitlin for crediting me on the post!)

18 Replies to “Rec’d Read: “The Asian Complex – Or Why We Fear Iran More Than North Korea””