As everyone settled down on Sunday for an evening of Oscars, not even the red carpet glitz and glamour could distract some of us from the movies and actors that should have been nominated. While women and people of color have made strides this year in the Academy Award nominations, some have noticed the lack of Asian and Latinx actors in the mix and the films they appeared in.

One movie that has inspired some to decry its absence at the Academy Awards this year is “Columbus,” led by the talented veteran actor John Cho (in a role that once again proves his star power – and why he was the focus of the #StarringJohnCho movement) and remarkable newcomer Haley Lu Richardson.

I was thrilled to learn about this movie, and truly enjoyed watching it. But beyond just the fact that this is a romantic indie drama with the unusual pairing of an Asian man and a white woman, here are 4 more things that made me cheer for “Columbus”:

#1: John Cho, an Asian actor, is the romantic lead

A few years ago, the TV show “Selfie” came on the scene – with John Cho in the lead role — and I was raving about it for a very good reason:

Just consider that for a moment – an Asian man as the leading romantic role in an American TV series. When have you ever seen that before? It’s historic! If there’s only one reason you choose to tune in to see Selfie, make it this one.

Well, the excitement sadly didn’t last, as “Selfie” was cancelled after only 13 episodes. Yet Cho’s performance was widely applauded — and it left many of us asking, when will he have the chance to be a romantic lead in the movies?

In a world where far too many people still don’t think Asian men are sexy, it’s always a breath of fresh air to see movies that challenge that stereotype in a positive way, such as John Cho’s character in “Columbus.”

The Korean American identity of Jin, played by John Cho, is something we’re reminded of throughout the film – whether Jin is speaking Korean on the phone, or talking about his translation work in Seoul, or even discussing how funerals are handled in Korean culture. But while this is a part of his identity, it’s not something that provides momentum to the story, nor is it or subverted into stereotypes either. Instead, we’re presented with this man named Jin who happens to be Korean American (and is presented very authentically throughout the story), yet Jin is also given room to be a complex individual, sharing thoughts and emotions that make for great drama.

This is, in fact, one of the things that John Cho loved about “Columbus” from the beginning, as he described in an NPR interview:

…race exists very naturally. It’s simply a component of this person’s identity, and it doesn’t drive the narrative. But neither is it ignored. And it’s – I think it’s a very difficult balance to achieve, and it requires a deft touch. 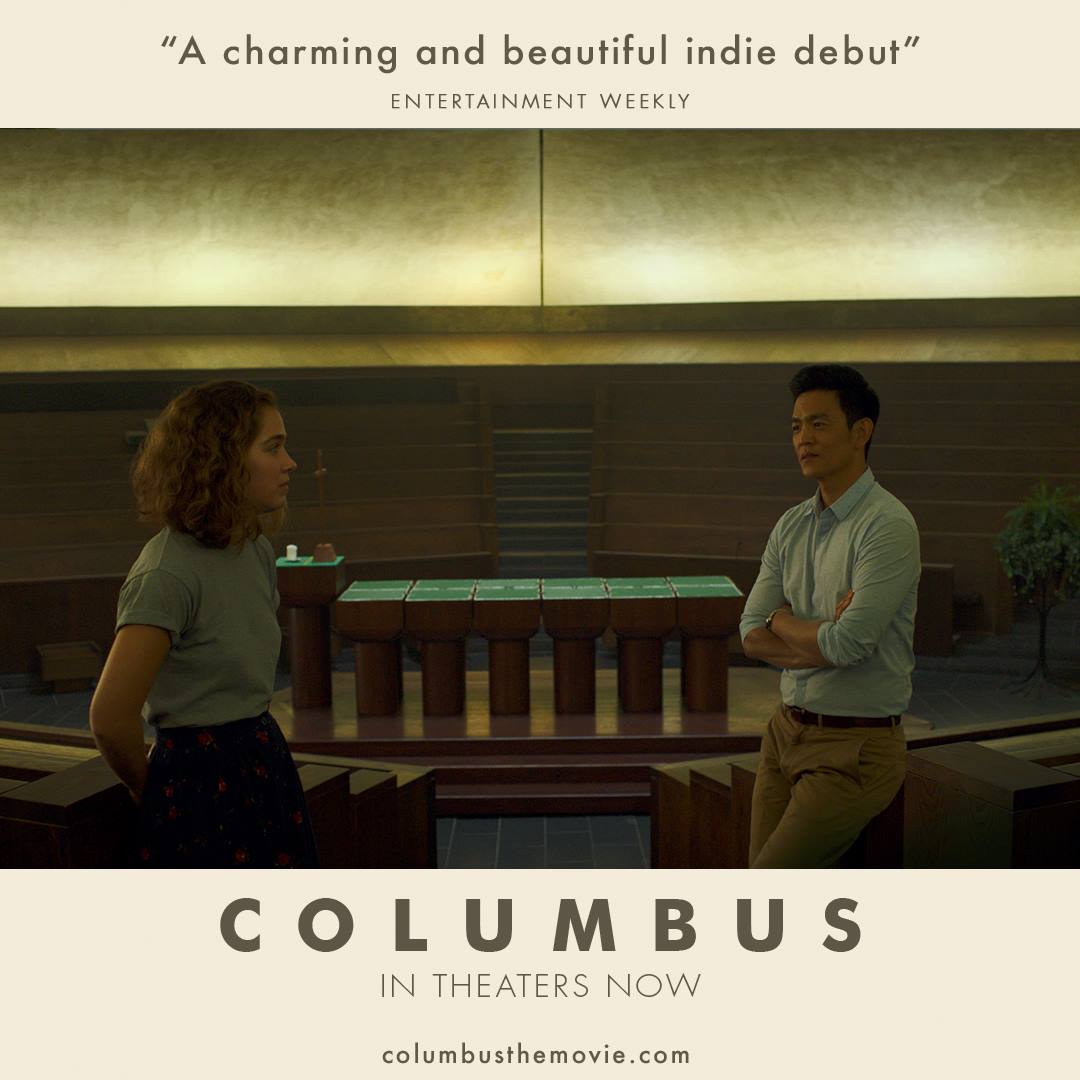 When I was watching “Columbus” a second time around and taking notes (yep, I’m a movie nerd), I couldn’t help noticing that many of the moments that touched me most happened when John Cho and Haley Lu Richardson were onscreen. Like when Jin asks her, regarding the piece of modern architecture, “Tell me about what moves you,” a line that feels a bit flirtatious. Or when the two are laughing over that awkward question from Jin about whether her mom does meth, and that laughter is layered over a certain tension that can happen when you’re inching toward closeness and not entirely certain about it. It’s a delight to watch the two of them, whether they’re just hanging out in the front seat of a car or standing among the pews in the breathtaking interior of a modernist church building.

#4: “Columbus” is an incredible movie, period, and deserves every accolade

So while you’re in a hurry to catch up on all the Oscar-nominated (or Oscar-winning) films for 2017, be sure to take a moment and see “Columbus” (which you can now watch on Amazon).

Have you seen “Columbus” yet? What do you think of the movie?

8 Replies to “4 Reasons the Movie ‘Columbus’ (#StarringJohnCho) Made Me Cheer, Beyond its Romance”