Yes, Asian men and White women can love on the big screen and make for enlightening cinema. If you frequent art house theaters and film festivals, or simply want a more sophisticated pick for a change, here are 11 critically acclaimed AMWF (Asian Male, White Female) movies you don’t want to miss, in alphabetical order.

Technically, “The Big Sick” is a rom-com, complete with an AMWF couple at the center of the story (Kumail Nanjiani, played by himself, and Emily Gardner, played by Zoe Kazan), which is set in Chicago. But the true heart and soul of this film surfaces when the Pakistani American man finds himself in close quarters with her white American parents, with some unexpected and even heartwarming results. Given that “The Big Sick” received an Oscar nod for original screenplay and many singled out Holly Hunter’s performance as worthy of a nomination from the Academy, any savvy filmgoer should have this movie on their watch list.

The romantic indie drama “Columbus,” with the unusual pairing of an Asian man (John Cho) and a white woman (Haley Lu Richardson) in this architectural mecca of Indiana, has delighted audiences and critics alike, leading many to decry its absence at the Academy awards. As I wrote earlier this year about “Columbus”:

If you haven’t read it yet, check out my post 4 Reasons the Movie ‘Columbus’ (#StarringJohnCho) Made Me Cheer, Beyond its Romance.

How could you not love a 1959 film with such a daring movie poster for its time, not to mention being way ahead of the curve on race? Starring the legendary James Shigeta, one of the first Asian American actors to show his sex appeal in the movies as a romantic lead, “The Crimson Kimono” offers plenty of gripping action and a love triangle with an AMWF twist, at a time when interracial love was still taboo and illegal in many places around the world (including America). Since this film is preserved by the Academy Film Archive — yes, the same Academy behind the Oscars — it should be on the list of every serious film buff, whether you’re into AMWF movies or not.

This American coming-of-age teen flick drew loads of critical acclaim for Hailee Steinfeld’s turn as the protagonist Nadine, turning it into a must-see among AMWF movies. But you should also watch “The Edge of Seventeen” for Hayden Szeto, in his breakout role of Erwin Kim. As I wrote last year for WWAM BAM!

Thank goodness for the new teen movie The Edge of Seventeen, just released in late 2016.

The film features one of the most refreshingly unstereotypical portrayals of an Asian man in a teen movie – the breakout role of Erwin Kim, played by Hayden Szeto.

And surprisingly, The Edge of Seventeen even shares some common ground with, of all movies, Sixteen Candles (Vanity Fair noted “Steinfeld’s character is derivative of Molly Ringwald circa Sixteen Candles”). Who’d have thought?

If you’re hungry for a good teen movie, one with a positive portrayal of an Asian guy, you must see The Edge of Seventeen, featuring Hayden Szeto.

In “Ae Fond Kiss,” cultures collide in the world of AMWF movies when a Pakistani Muslim man and white Irish Catholic woman come together in Glasgow, not long before his arranged marriage to a cousin. The pushback and prejudice from his family and her colleagues will feel like familiar territory to many interracial and intercultural couples. But what makes this story different is that the film shows sympathy to both sides. Plus, there’s strong chemistry between the leads (Atta Yaqub and Eva Birthistle) — and plenty of passion behind closed doors. The film took in numerous awards across Europe, including two at the Berlin International Film Festival and one at the Cesar Awards, and will surely delight anyone looking for a more thoughtful portrayal of the challenges of interracial and intercultural romance. 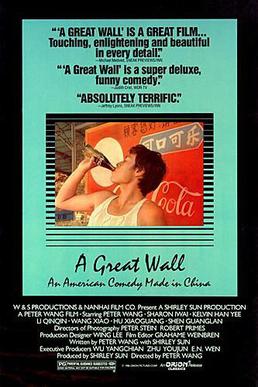 This movie — which tells the story of a Chinese American family visiting relatives in Beijing — enjoyed critical acclaim and was the first American film to be shot in the People’s Republic of China. It also happens to have a rather memorable moment in the history of AMWF movies. As I wrote a few years back:

When Kelvin laid with a white girl on the couch and kissed her in this 1986 movie, some dubbed it the “makeout scene heard ‘round the world” because it was one of the first movies to ever feature an Asian guy and non-Asian girl doing just that. Kelvin brings some serious sex appeal to the scene — his sultry eyes, and even the sensual way in which he pulls at her blouse — despite the fact that they never actually “do it” in the movie. Plus, I love that Kelvin is so alpha, which shatters that despicable “all Asian guys are so emasculated” stereotype.

Whether you’re watching for the groundbreaking cinematography, the exploration of cultural divides or just Kelvin Han Yee, “A Great Wall” is worth it.

This quiet romantic drama that sets an AMWF pair — actors Toni Colette and Gotaro Tsunashima — against the backdrop of Australia’s mining country does tug at the emotions (and ilicited a few tears from yours truly). But despite the fact that their love affair is unexpected, it’s also a powerful one that will stay with you long after the credits are over. Given all the Australian awards this film garnered in 2003 — including winning for best film, director, actress and cinematography — any art house movie fan will want to watch “Japanese Story.”

In “The Lover,” a French teenager in Indochina falls into an illicit love affair with an older Chinese man, making it one of the steamiest pairings on this list of AMWF movies. As I wrote a few years back:

But besides all the sex appeal, the film also received an Oscar nomination for best cinematography and was the seventh-highest grossing film for 1992 in France, where it also earned several Cesar Award nods and won for best music written for a film.

This inspiring movie based on the memoir of the same name charts the rise of Li Cunxin from a rural impoverished boyhood in China to world-famous ballet dancer in the US. It’s worth seeing just for Chi Cao, who plays Li:

Chi Cao … had me before I even saw the film. Blame it on that photo … where he’s cradling the leg and torso of Amanda Schull (who plays Liz), while studying her with eyes that seem to yearn for more than just perfect point technique. Who wouldn’t want a “private lesson” with him? Chi Cao shows incredible sex appeal, even playing a newcomer to the US who stumbles through his first steps into the world of dating and sex, and shines in some stunning dance sequences that will also have your heart racing.

Plus, “Mao’s Last Dancer” attracted a slew of Australian movie award nominations, including for best film, and won for its original music score. And any serious art house filmgoers will delight in the ballet sequences — they’re just as moving as the story itself, which happens to feature two AMWF romances.

What happens when a prim white American housewife in New York makes a daring proposal to a Korean immigrant working at the dry cleaners, and unexpectedly falls in love with him? “Never Forever” is quite a sexy affair, with bedroom scenes (and a surprising fantasy) that just might leave you sweating too. But it’s the strong performances by Vera Farmiga, Ha Jung-woo and David McInnis that elevate this emotional romantic drama into something worthy of art house accolades among AMWF movies. It debuted at Sundance and won at the Deauville American Film Festival.

This first feature film from Oscar-winning director Ang Lee probes the cultural spaces that unite and divide an elder Tai Chi teacher and grandfather from Beijing and his son’s family in America, including the white daughter-in-law who doesn’t see eye to eye with him. Any East-West intercultural couple or family will find the cultural clashes in “Pushing Hands” relatable. And under the expert direction of Lee, the film becomes a timeless classic, including among all AMWF movies.

What other critically acclaimed AMWF movies would you recommend for savvy filmgoers?