Recently, fellow blogger Marissa at Squirrels of a Feather did a post titled 10 Reasons Chinese Mother-in-Laws Rock. When I read her post, I was reminded of the many ways my Chinese mother-in-law is also amazing.

I’m not able to spend this mother’s day with any of the moms in my life (including my extraordinary stepmom back in America, who is as much of a mom to me as my own mother was). But I thought I’d take a moment to share a few of my favorite photos capturing some of the love my Chinese mother-in-law has shown me over the years. And here in China, where families rarely say “I love you,” it’s the actions that truly matter.

Wishing all of you a happy Mother’s Day! 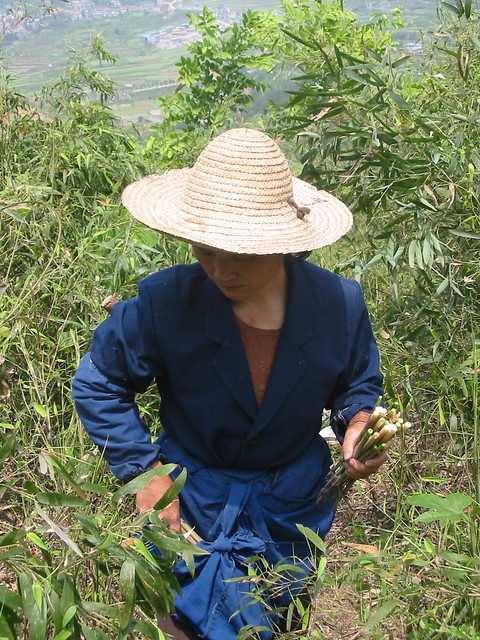 Recently I wrote a column for China Daily titled Connecting Nature, Food, Life in Mountains, and it was inspired by the time my Chinese mother-in-law invited me to come up the mountain with her to gather wild edible plants. Here’s a photo from that day, with my mother-in-law holding a handful of wild bamboo shoots. It was so lovely of her to share this experience with me.

When I was staying with my husband’s family one summer, I complimented my mother-in-law on her mouthwatering pickled radish and asked about the recipe. So one afternoon, she actually taught me how to make it — and yes, it was as hands on as it gets!

Every spring for the Tomb-Sweeping Festival (also known as the Qingming Festival), my mother-in-law prepares Qingming snacks from scratch. The green color of the snacks comes from the aromatic mugwort, which grows wild all over the village and the mountains. Here she’s preparing the dough, which will eventually be shaped into sweet rounds and savory turnovers.

A number of holidays during the year, including Chinese New Year, call for savory turnovers known as migu and my mother-in-law always spends time making huge batches for us and relatives who visit. Here she’s laying out the finished turnovers, which will later be steamed or fried and then served up.

I’ve often praised my mother-in-law’s homemade tofu (including in a China Daily column I wrote up for Chinese New Year this year) and it’s extraordinary to witness her in the kitchen, going through the process of crafting this essential Chinese food. She always makes extra for me, the vegan, and sends me home with more than any person could humanly consume.

People close to me know that vegan Chinese shaobing, or stuffed flatbread, is one of my favorite treats, and that includes my mother-in-law. For a time, whenever I stayed with her I would soon catch her in the kitchen cooking up another batch of what I think of as “Chinese pizza,” and always send me home with a huge stack of them for quick meals. Yum!

During the winter solstice, my mother-in-law showed me how to make sesame balls or maqiu, a traditional holiday treat. It was fun learning the process as well as helping to keep the fire-powered wok supplied with wood!

My mother-in-law and I stand before the family home during a Chinese New year.

Wherever you are in the world, here’s hoping you have a wonderful Mother’s Day!

What if my mother could have seen me in China? What if she could have met my Chinese husband John?

The question taunted me a few months back when I encountered this post by Susan Blumberg-Kason (my friend and author of Good Chinese Wife), recounting one time when her mother and father flew to Hong Kong to spend time with her. This was a regular thing for Susan’s parents, who loved to travel and longed to see their daughter more often than her occasional jaunts back to her hometown of Chicago. My heart ached as I scrolled through photos of her mom and dad smiling at the camera, knowing I could never have posted pics of my parents together in China.

After all, my mother had passed away long before I first boarded that Air China flight in 1999 headed straight for Beijing.

A pained expression flashed across my face as I recalled 1994, the same year my mother lost her battle with a late-stage skin cancer that had aggressively metastasized all over her body.

Weeks before she passed away, she gifted me with an Audubon guide to the Eastern birds of North America – a reflection of my career aspirations at the time, the hope that I would one day become an ornithologist. I spent huge chunks of my summers chasing after warblers, swifts and ospreys with a pair of binoculars, and dreamed that I might earn a PhD one day from Cornell, which housed America’s preeminent laboratory of ornithology. Even though I studied a foreign language, it was Spanish – and I viewed it as little more than fulfilling a requirement to graduate. I only wrote poetry or in my trusted journal, where I felt freer to pour my heart out than with anyone else. And when it came to my adolescent love life at the time, I dated a string of gangly, shy white guys – never daring to kiss outside my own race.

In short, my mother carried a very different image of me to her grave.

How did I end up in China? That’s a long story in itself – but suffice to say, I arrived in this country knowing hardly a phrase in Mandarin and little about the culture or history, never expecting I’d find a new career, a husband and a future for myself. I never expected I’d shed away much of the girl my mother once knew, turning into a completely different woman.

My greatest regret is that my mother will never be able to meet the person I am here in China – or, for that matter, to meet my husband John. Second to that, it saddens me to think that she’ll never be able to read my blog or anything else I’ve written – from the articles I’ve published elsewhere to essays I’ve contributed to two anthologies. What would she think of my decision to be a writer? How would she react when hearing me chortling away in Mandarin? Most of all, would she love my husband John? Would she see the same indomitable spirit in him that made me want to marry him?

I’ll never know the answers. And sometimes, when I contemplate these questions, I can fall into a melancholy funk, even crying. It’s funny that so much time has passed and yet, at times, it can feel as if my mother died just yesterday.

In light of all of that, here’s the strangest thing – I also don’t know who I would have become, had my mother not passed away.

Before her death, fear was my almost constant companion whenever I ventured into foreign settings. (I famously cried quite a lot during a high school trip to Spain without my parents, and I swear that were it not for the really caring teacher in charge of us, I never would have survived the entire journey.) I was such a homebody back then, so completely attached to my parents…and especially, to my mother. Deep down, I realize that her passing forced upon me one of the scariest things a young girl could ever face – and as a result, the fears I once had about living far from my parents and home eventually fell away. Without that experience, I don’t know if I would have had the courage to leave my own country for one I barely even knew.

A fortune teller in Taiwan once advised me that I had the ability to turn the bad things in life into something better. Was my unlikely detour towards China in the years following my mother’s death yet another example of this?

On this coming Mother’s Day, I’ll once again remember my own mother. And I know that, as much as I wish she could have been here to see me now, she’s still shaping the person I am in subtle and yet remarkable ways. That the legacy of being loved so deeply by a mother never really ends, even when the direction of my life takes me to places she never could have imagined.