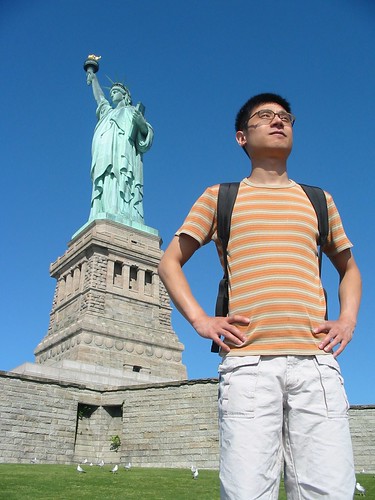 “You’ve got some balls.” That’s how my husband’s white friend praised him the other day. John happened to share with him the discrimination — and his decision to fight back.

“He told me he could never fight back,” John said to me. Apparently, the white guy faced some serious injustice of his own last year, but did nothing in return. “He said he didn’t have the balls to do it.”

If they had to choose between the two, most Americans probably wouldn’t pick John as the guy with more chutzpah. He’s 5’4″ (1.65 m) and easily a foot shorter than his white friend. He has a lean frame, the complete opposite of his friend’s husky build. He speaks English with such a gentle accent. And, of course, he’s the one who’s Chinese in a country where Asian men still get the “emasculated” stereotype slapped on them.

But to me, he’s the strongest man I’ve ever known — though even I wouldn’t have said that at first glance. I too struggled with appearances, wondering if I could ever love a man shorter — and lighter — than me. Then he told me how he nearly filed a lawsuit against a factory in his hometown, and followed up with complaints to the environmental bureaus in the region. That’s when I started to see him for who he really was: a David who wasn’t afraid to stand up to the Goliaths around him — including those who discriminated against him.

“I think they thought I wouldn’t do anything,” John once said, “that I am not the kind of person who would fight against discrimination.”

You might say John’s gentle appearance is his secret weapon. Behind that 5’4″ stature and soft voice of his lies the heart of a hero — and some serious balls. 😉

How have you or your lover/spouse defied the stereotypes in a positive way?

20 Replies to “My Chinese Husband Has Balls”