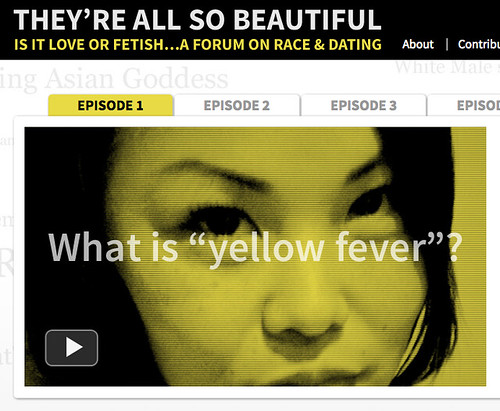 In the past few weeks, I’ve discovered They’re All So Beautiful, an online forum about race and dating that’s features a five-part online series and is also a companion to the documentary Seeking Asian Female.

Yes, it’s a conversation in part about “yellow fever” — but one with more intelligence, one that seeks to transcend the usual boundaries and assumptions.

The site really got me thinking when I discovered Jeff Yang’s blog post. For those of you who don’t know him, he’s an Asian-American journalist for the Wall Street Journal — and one who has written some of my favorite articles exploring why you see so few Asian men with non-Asian women (such as this piece).

He points out that the white guys interviewed in Episode one of the online series seem to embody the worst possible stereotypes about white men who pursue Asian women:

These guys come off as sweaty, snaggle-toothed, dead-eyed; they sport learner’s-permit goatees or scrubby pornstaches, and if I were a woman of any race who stumbled into a blind date with one of these fine specimens of the male species, I’d sneak a peek beneath the table to make sure he wasn’t sporting an ankle monitor.

But then again, Jeff Yang emphasizes what we all know — that not every white guy who ends up with an Asian woman is creepy — and something we might not:

And I know all too many Asians who, in the pursuit of pointing out the gross, stereotypical beliefs of guys like those interviewed in this vignette, use shiveringly unpleasant language to describe the Asian women that date them, while sweeping all interracial couples into the same steaming midden of contempt.

What about the community of Asian men and non-Asian women?

Well, not even we are immune from creepy attractions if you look hard enough — for example, the white women with “yellow fever” or the Chinese men who want a Western wife to brag about. But I’ve never met any white women from the former — and know of only a handful of Chinese guys who fit into the latter. And I can’t help but feel that in our community, there are just not that many people getting together for sketchy reasons — and I’m not the only one who thinks so:

I sincerely think that because the barriers to entry for Asian male/white female relationships are higher, the vast majority of AM/WF couples who do get together and eventually marry do so carefully, with real commitment and good intentions on both sides.

What you do think?

59 Replies to “Love or Fetish? On “Yellow Fever” and Creepy/Sketchy Attractions”