With summer vacation in full swing, for many that means air travel. If you’ve ever spent time on a plane, maybe you’ve wondered about the folks who actually serve you on the plane — the flight attendants. What is it like to be behind that beverage cart asking “Coffee or tea?” And what happens after all the safety demos, meal services, and in-flight duty-free shopping are over?

Former flight attendant Tiffany Hawk offers an insider’s perspective into the business — along with an irresistible coming-of-age story — in her debut novel, Love Me Anyway. The book centers mainly on Emily Cavenaugh, a young twentysomething woman who becomes a flight attendant to escape her humdrum small town and an abusive marriage. But much of the story explores Emily’s torrid affair with Tien, who is quite possibly one of the sexiest Asian romantic leads I’ve ever encountered in fiction. Even his accent makes you want to swoon. Think Antonio Banderas, but Asian. (Humana, humana!)

I recently interviewed Tiffany Hawk about Love Me Anyway, and am excited to share that brief conversation with you.

A travel writer and writing coach, Tiffany has written for The New York Times, the Los Angeles Times, NPR, Coast magazine, Sunset, GQ.com, globorati.com, National Geographic Traveler and more. Learn more about Tiffany at her website, where you can also find her blog, and follow her on Facebook, Twitter, Pinterest, Goodreads and Google Plus. 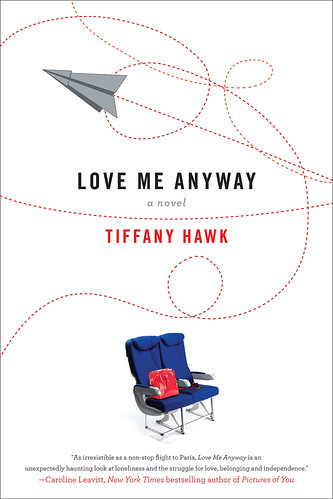 In a blog post about Love Me Anyway, you mentioned: “I fear it would be a challenge to cast Tien, the married man who throws Emily’s life into a tailspin. Hollywood isn’t known for embracing Asian males as romantic leads (I could devote an entire post to that prejudice).” Was your own personal interest in seeing positive portrayals of Asian men — including as romantic leads — part of the reason you chose to have Emily and Tien fall in love?

Absolutely. The initial inspiration for the Tien character was less political and more personal – he was partially based on a great love of mine, who happened to be Asian. Or maybe he didn’t even “just happen” to be Asian, maybe I was drawn to him by his worldliness and his sexy accent and even his complicated, war-torn background. Either way, when it came to the book, I wrote a few different versions of the male lead, partly to disguise the real life muse and partly because other people were concerned about marketability. In the end, the Vietnamese character was much more compelling from a literary perspective, and then from a marketing perspective, I did begin to feel political. To anyone who won’t buy a book because it has an Asian lover – first, well, that’s pretty messed up. And, second, my god you’re missing out…and I’m not talking about my book!

Could you talk about what ideas or themes you wanted to explore through the relationship between Emily and Tien?

There is a line at the end of the book where, in response to the platitude that says you can’t live your life for other people, Tien says, “if you can’t live your life for your family, what’s the point of living?” I think that sentiment touches on all of the characters in this book, each of whom would probably have a different answer to his question. I don’t think there’s anyone in the book who isn’t torn between passion and morality, independence and family.

Overall, what insights do you hope your readers will gain from Love Me Anyway?

Whether they understand a little more about flight attendants, their own heart, or the complexities of family and infidelity, I would be thrilled if my readers could look at the world just a little differently. That’s the best thing any book can offer.

Portions of the book take the reader to Asia, including scenes on those long-haul flights to and from the continent. Did you ever work any routes to Asia? If so, could you tell us about your favorite destination in Asia — and perhaps share any great tips for overcoming jet lag?

I was lucky enough to spend quite a bit of time in Asia. It’s always so hard for me to answer questions about my favorite destinations, but if I had to pick, I’d probably pick Hong Kong. Maybe it’s just because I’ve spent more time there than anywhere else in Asia, but there is something magical about the heat and humidity and the sleekness and grittiness, and the massive skyscrapers right next to a never-ending flow of ferries headed to outlying islands. On the other hand, the food alone is enough to make me long for another trip to Beijing. What are you doing to me?! Now I’m dying to get on a plane, and they both seem so far now that I’m on the East Coast of the U.S…talk about jet lag.

Let’s see – drinking water is a huge help because dehydration is one of the biggest contributors to jet lag. Also, I don’t ever travel without a sleeping mask. You’d be hard-pressed to find an international flight attendant who doesn’t carry one in his or her pocket. I know those aren’t sexy or particularly earth-shattering tips, but they work!

Perhaps next time you’re heading to or from Asia, you might take Love Me Anyway along with you for the ride. Thanks so much to Tiffany Hawk for this interview!