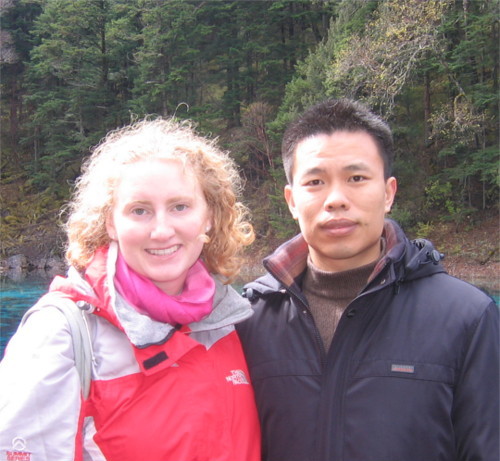 This is the story of how Charlotte, “a shy, Midwestern American girl” who is also a writer, mom and blogger at Chinese Potpourri, ended up marrying a Chinese guy — with no traditional proposal, and even no huge wedding banquets. Theirs is a subtle and surprising romance, which includes perhaps one of the most unusual ways I’ve ever heard a man express his true love for someone: “I want to be your slave for the rest of my life.”

And ultimately, Charlotte also shares a universal truth based on her experience: “I’ve realized that even though our story is unconventional and unexciting, it’s special because it’s ours.” Well said.

Thanks so much to Charlotte for contributing her story!

Growing up in a rather homogeneous community full of people whose ancestors mostly came from Scandinavia — and attending a school where the required foreign language was German — I went away to college with little first-hand experience in working with people unlike myself. I wasn’t ignorant of course; I was a bookworm who always exceeded the summer reading goals as I read stories about life in other countries and cultures. Maybe it was that, or the fact that my mom’s good friend adopted two children from China or that my I had heard plenty of stories from mission fields around the world, but I always had a desire to travel abroad for at least some length of time. I just didn’t know when, where or how I’d afford it.

A few weeks into college life, I found out that my school worked with a program that sent teachers to China for one to three years. I thought this would be an excellent way to expand my world view, work in my chosen career field (education) and travel. When senior year came and my friends were furiously filling out job applications and anxiously doing interviews, I did just one of each and was accepted to teach in China for a year. On graduation day I found out that I was going to a small town in Hebei Province along with my friend Kay. We’d be the only two foreign teachers there and, as rumor had it, the only foreigners residing amongst the nearly 1 million citizens.

An older woman who’d helped start the program in the city accompanied Kay and I on the journey, showed us around town and introduced us to her friends, most of whom attended an English Corner every weekend. With nothing better to do, Kay and I woke up early each Saturday morning and took the bus to hang out for two hours with a group of people, most of whom were a decade older than us. We discussed their impression of foreigners, the current state of the oil industry and attempted to answer the perennial question: “What can I do to improve my English?”

It was the first week there that I met Santiago. I had to do a double take when he told me his name since, in addition to a Spanish name, he even looked a little like some of my Mexican friends back in the States. That first day, I found out he had a master’s degree in nuclear medicine and had been accepted to numerous American colleges for his doctoral studies, but never got to go due to a life-threatening illness that landed him in the hospital, and later brought him back to this tiny town and found him living with his parents. Despite the fact that I had no idea what nuclear medicine actually is, he was easy to talk to, intelligent, funny and had remarkable command of the English language. Time flew by as a group of us talked. Afterwards, I was excited that a group of the “old-timers” (those who’d started the group years ago) were inviting Kay and me to lunch so we could get to know them better. Luckily, Santiago was a part of this group. In the weeks and months that followed, going to English Corner was the highlight of the week since this town doesn’t have much going on and the school Kay and I worked for was incredibly strict.

About twice a month, the “old-timers” or someone from English corner would have lunch with us, invite us to go shopping or attend some family function. The kindness that was shown to us helped make the decision to return for a second year of teaching a simple one. During the summer I didn’t keep in contact with anyone; I returned home and worked 16-hour days to pay off my student loans so I could afford to go back to working for less-than-minimum wage. Upon returning to China, our friends were so glad to see Kay and me, so lots of parties, trips to KTV and evenings sipping Pepsi and eating egg tarts at the sole KFC in town ensued during the September and October.

Over the previous year, Santiago had become a close friend of ours and since his previous relationship had ended, he spent more time with Kay and me. Sometimes we snuck him into our apartment and cooked him Western foods but usually we’d obey the rules in favor of hanging out at KFC and chatting until our school-imposed curfew arrived. One night in October 2006 we were having a conversation about history and slavery. I still don’t remember how it all played out, or how it even started, but about an hour after getting back home, I got a strange message from Santiago. He said he wanted to tell me something but wasn’t sure he could.

At first I thought it was a mistake as I wasn’t as close to him as Kay was. She had invited him and was usually the one to arrange things, while I was the quiet one who usually agreed to the plans that were made. I figured he sent me the message by mistake since Kay’s phone number was just one digit different from mine. I replied anyway, letting him know who I was, and he said that yes, he did want to tell me something but was afraid. Not one to play games, I found it annoying and told him to just tell me so he could get it over with and get to sleep. It was almost midnight — I had four classes in the morning and he had to work at the hospital. The next message I received was rather odd: “I want to be your slave for the rest of my life.” I think my heart stopped beating for a second or two. It was not what I expected; I thought he wanted help translating an article or teaching his nephew. It was hard to believe since I had no idea he was interested in me, and I wasn’t interested in him, except as a friend. I’m not sure what I said, but I do know that I didn’t get any sleep that night. I made an insanely expensive long distance call to my mom and spent a lot of time thinking about it so I could give an answer. I viewed dating as something not to be taken lightly, and having lived in China for a year, I knew that most Chinese have an even more serious view of it. Given his message, he didn’t consider this just a short-term adventure.

After a sleepless night, I told him that I was open to having a relationship that may lead to marriage. My parents seemed okay with it, and Kay encouraged me to give it a chance. Due to the distance between our homes, and our work schedules, we were only able to see each other at English Corner and go out alone once or twice a month. Sometime in spring, he started talking about “next year when we’re married,” so when a job opportunity came up at another school, I took that so that Kay could get a new teaching partner.

Going home that summer was bittersweet. I called him every morning before starting my 16-hour days. I couldn’t believe how much I missed him since just 10 months prior, I’d had no feelings for him at all. Two days after I returned from the US, we went to the capital city to get things squared away for my work visa, and also stopped in at the office that processes the marriage certificates for foreigners. We walked in, filled out a few papers, handed over some money and walked out husband and wife. Certainly the furthest thing from my childhood dreams of a church wedding wearing a hand-knit wedding dress and definitely not a firework and confetti-filled event like many couples experience. We didn’t even have a wedding since his parents said it was inappropriate (this is my husband’s second marriage, so they thought it wasn’t right to have another wedding as guests would be obligated to give money again), though about two months later we did invite a few of my friends and coworkers to a wedding dinner.

So, that’s our story of how a shy, Midwestern girl ended up marrying a Chinese guy who never ever dreamed of meeting a foreigner in his younger years. There was no traditional proposal and there weren’t multiple weddings full of fireworks, charismatic hosts and enough food to fill the whole city. But five years, three moves and two kids since we got those tacky-looking red marriage booklets, I’ve realized that even though our story is unconventional and unexciting, it’s special because it’s ours.

Charlotte — a wife, mom and freelance writer in small town China — blogs about her life at Chinese Potpourri.

We’re looking for a few good stories from Chinese men and Western women in love — or out of love — to share on Fridays. Submit your original story or a published blog post today.

21 Replies to “Double Happiness: “I Want To Be Your Slave For The Rest of My Life””