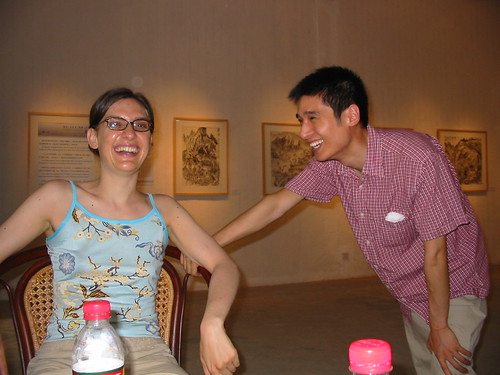 “That’s too nauseating!” Caroline reproached me the morning after spending the night at her house in Yiwu — for a rather nauseating gesture towards John.

Since I’d overslept that morning, I rushed out the door without putting on sunscreen, and had to do it in front of Caroline and John. Just as I massaged the lotion into my face and arms, John spoke up. “Could you give me some?” I don’t know why, but instead of handing him the container, I applied it directly to his face. That’s when Caroline groans — at this mere insinuation of affection.

The last time I heard anything like “that’s nauseating” about my love life was in high school. But I’m not surprised by Caroline. When I taught freshman college students in Henan Province, girls and boys sat on different sides of the room, and never spoke publicly with the opposite sex, afraid of the mere perception — and, in some cases, stigma — of romance. Their high schools and parents prohibited dating. I’m sure Caroline’s and John’s schools and parents did the same. Yet, Caroline and John are in their early twenties, and, to them, love is still an embarrassing, strange thing. They make me feel embarrassed all over again, as if I am 12 and afraid to hold hands in the school hallway with my so-called boyfriend.

Still, while I flirt fearlessly, I fear the words Caroline spoke to me freely, a week after we return from Yiwu: I think he would make a great husband.

I’ve only begun to know John, and now Caroline wants me to think about him in marital terms. Now I’m the one embarrassed, sitting on the opposite side of the classroom, and afraid to make a move.

But putting lotion on John’s face, and getting ridiculed by Caroline? I think, secretly, I love it. Now, that’s too nauseating.

Have you experienced the embarrassment of love in China? Did your friends laugh at you when you flirted with someone, or held hands, or even tried to kiss?

7 Replies to “Chapter 4: The Embarrassment of Love in China”