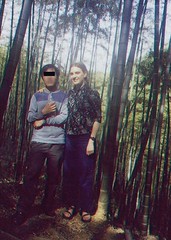 Frank, my ex-Chinese boyfriend, may never love again, the way we loved. This is what I learn when he and I have dinner one evening in early July, 2002.

Frank and I had began to talk once again in the first week of July, after he sent me a series of text messages in Chinese demystifying some of his feelings:

“I regret what happened between us.”

“I was unfit for relationships.”

“This was a failure of mine.”

Frank’s words released me from the emotional purgatory I suffered in after our breakup — a breakup I had to shoulder silently and painfully each day, because my desk sat next to Frank’s. Soon, we became friendly again, every warm smile a relieving reminder that we were moving towards a friendship.

One night, I was moved to send him a text message in Chinese: “I am so glad to see your smile again.”

“I sincerely appreciate your understanding,” he wrote back. “You are my best friend.” I clutched my chest again because his words brought me back to our courtship. Did Frank really break my heart? I began to wonder if our parting was a mistake.

But now I know better, after that dinner.

“It’s time for me to let go of my ideals,” he told me, referring to the dreaming side of his personality, the dreamer within who aspired to become a writer.

I shuddered. “But you’re a great writer, and there’s nothing wrong with dreaming.” I wasn’t just flattering him. I saw his talent at work everyday. Frank was the Public Relations writer for the company, crafting irresistible news releases about the company’s new services, websites or activities. His writing skills even saved the company from an international lawsuit — yes, he could write in English too. And he once told me he would write books about life in China.

“This is simply a part of my journey into manhood. It’s time for me to focus on my career and my family.” His smile seemed out of place, as if we were presiding over a funeral. But it was a funeral. Because, once he had a dream, a dream that died with every word he spoke that evening.

“But you don’t have to let go of your dreaming to focus on your family and career,” I pleaded. Frank heard my words, but didn’t hear what I was really saying.

As for love, true love was just a waste of time for Frank. “I’m better off finding someone I don’t necessarily love, but who I can have a peaceful life with.” He then laughed as he referred to our time together. “It was interesting enough to share with my younger brother.”

I didn’t know what to say, feeling a stranger to a man who had once been my true love. Maybe I was the fool — blinded by emotions, enchanted so easily by love — because I believed he once was my true love.

Maybe I did want an ultimate love, an all-encompassing, passionate, insomnia-inducing love. Was I expecting too much out of China, or even this phlegmatic Chinese man before me, to believe I could find such perfection here?

According to Frank, I was expecting way too much out of my job.

“I’m exploring the possibility of finding a new position,” I said to him. “There’s this chemical company with offices in the US, and they’ve been talking with me about working for them.” By July, I had so little work to do at my Chinese Internet company, I had to scratch hard for something, anything, to keep my busy. I got tired of it, tired of the long days, trapped in the office with no direction, wondering what to do. So, I did what I thought made sense — look for something better.

“You’re so ungrateful,” Frank said, scowling. “Do you know how good you have it at our company? Do you think you could find a better position somewhere else? Your problem is not your job, it’s you. What you need is to adjust your expectations, and learn patience.”

In love, Frank had obviously adjusted his expectations. He didn’t care about being in love with his future wife — he just wanted a taciturn domestic life. But I wanted more.

Was it my emotional ups and downs that turned him off passion? I didn’t know, but I needed to adjust my own expectations. Sometimes, a failed love will change a person forever. Sometimes, that change is because of what you did. And, sometimes, your past lovers will never really understand you anymore.

Do you think love is impractical for some Chinese? Have you ever experienced this before?

8 Replies to “Chapter 5: Love is Impractical”