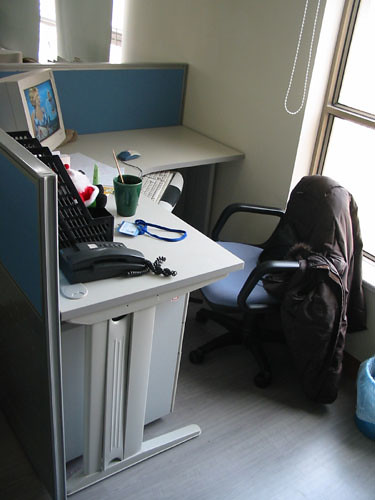 Our “green-skinned” train to Yiwu had no air conditioning on this sultry evening of July 13, 2002. My two translator friends, Caroline and John, were with me on the hard-seat section of this train. The three of us sat on the same seat — with upholstery in the same dark green color as the train — across from two soldiers in the People’s Liberation Army. I borrowed Caroline’s plastic fan from time to time, and sometimes caught a breeze through the open window. But mostly, the humidity loitered painfully around us, and we hoped, in vain, that it would go away.

My heart had been shut away before this trip. I had just broken up with Frank, my first Chinese boyfriend in Hangzhou, my coworker at the Chinese Internet company where I worked. It took me days before I even realized we were no more. It was not fast in any way — even our breakup seemed to loiter. Frank told me he didn’t think his parents would ever accept a foreign daughter-in-law, while sitting on my bed and holding my hands. We had been together for almost three weeks by then.

But he never explicitly said we weren’t together anymore.

At work, however, we had to be together — my desk sat next to his, even though my heart probably wasn’t by then. Frank ignored me the entire day, at the very time when I needed to hear from him. I knew why he did this — the company prohibited romances between employees. But I could only keep my heart in a compartment for so long.

On a Saturday at the end of June, he and I entered the building’s elevator at the same time, on the way up to the 12th floor where we worked. That’s when I broke the silence. “What is going on with us?” I asked him in Mandarin Chinese. “I really can’t take the way things are. Where is our relationship?” Tears streamed down my face as I spoke, and saw his face hardening with every word. “I can’t understand you,” he said, pushing me aside as he walked out of the elevator, and away from me.

I can’t understand you. Maybe he had never understood me. And maybe that’s why Caroline had later told me “You need to be careful who you date.” Caroline had two expressions — a serious one, which could mask any number of emotions, and a giggly one, where she often covered her face with her hand. This was serious.

Caroline had the right to approach me about my errors — because I approached her about errors almost every day. Since early May, the company had asked me to evaluate and assist the translators, and I had begun to work together with Caroline and three others — including John. But by the end of June, I stayed longer and longer. It wasn’t because they had more errors. It was because of my errors, the mistakes I’d made in this stuffy, dying relationship I faced every day. I had to sit next to my error, and I couldn’t stand the heat. It was too men.

So now, I sat on a men train heading to Yiwu, because Caroline invited John and I to go to her hometown. At first, I thought I was just heading away from the pain, from Frank, for a weekend of fun with friends. But, really, I had one true destination on this trip, and it wasn’t Yiwu. It was John, just as Caroline had planned.

33 Replies to “Chapter 1: My Heart is Shut Away, My Chinese Boyfriend is Gone”