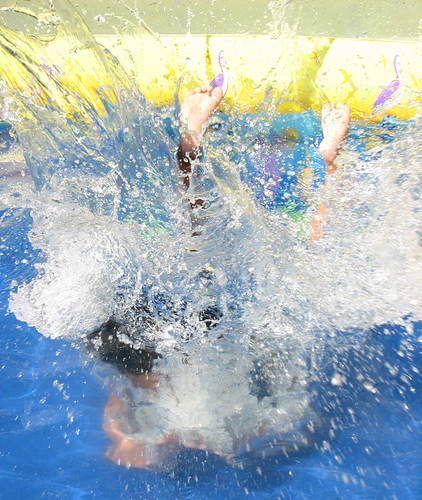 As a foreigner in China, sometimes you touch people in ways you never realized. Something you say or do in a moment — a small, forgettable thing to you — becomes a lasting impression to someone else.

I didn’t think much about swimming at the Chenjinglun pool in Hangzhou. I’d been going there since September. By early December, 2002, it was just a part of my routine — a way to get some exercise, while my usual gym was closed for renovation.

Chenjinglun was a typical indoor pool in China. It had lanes roped off for lap swimming. Yet, with the evening demand, you often shared a lane with as many as two or three people. I didn’t mind the sharing. But more people together means more collisions — such as getting clipped by a scissor kick, or clobbered by a front crawl.

That’s why my swimming routine also included flexing my language muscles. Because, if anyone got too close to me, or bumped me, I’d let them know with a firm, but polite, “Xiaoxin!” (Be careful) It was simply communication, acting as my lifeguard.

But, in fact, it’s not so simple when you’re a foreigner, speaking Chinese in China.

One Wednesday night, as I was leaving Chenjinglun, and looking to cross the street to get a taxi, I heard the voice of a Chinese man, speaking to me in Mandarin. “Are you a student at Zhejiang University?”

I turned around, to see a thirtysomething Chinese man that I didn’t recognize. He had a short, unremarkable haircut, wire-rimmed glasses, and khakis and a jacket that, in the twilight, seemed to be in the usual blue-grey hues that many Chinese men wore. “No, I’m not. I work here in Hangzhou for an Internet company.”

We chatted a little bit, as I often do with Chinese. He was an IT professor at Zhejiang University. But, as it turns out, he was here for more than just conversation.

“Actually, the reason I wanted to talk with you was to see how good your Mandarin is.”

“You’ve gained quite a reputation among the swimmers at Chenjinglun swimming pool. On the Zhejiang University online BBS, under ‘swimming,’ someone posted about you, praising your Chinese. One time, when someone was about to run into you, you said ‘be careful’ in Mandarin, and it left quite an impression.”

I never thought that a two-character word, xiaoxin, could stir up an entire community of swimmers, and turn me into a local celebrity — so much so, that a man followed me out of the pool, just to test my Mandarin skills. I didn’t ask for any of it. But, then again, I didn’t ask for people to run into me in the pool, either. Either way, I guess you have to be careful.

Still, even though a part of me felt embarrassed by the attention, I couldn’t help but ask one shamelessly human question that would affect my so-called “reputation” online, at the Zhejiang University BBS. “So, what do you think? Do you agree with them?”

“Your Mandarin exceeded my expectations.”

Have you ever done or said something that stirred up a surprising amount of attention in China — or another country?

5 Replies to “Chapter 31: An Unintended Splash at the Hangzhou Pool”