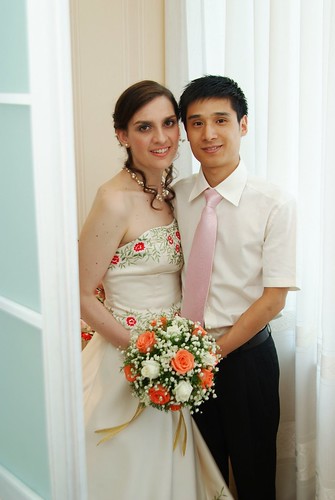 I’m a guy from China, really enjoy your blog, but am curious how you and your husband get along. Your from the US, he from China, so the culture and food are very different. I see few couples like yours, and don’t think I could ever marry a foreign woman because of the differences. Â How you can stay together well?

Thanks for the question, Tony.

I can’t speak for every couple like ours. But I will say this — understanding has really kept my Chinese husband and I together (we’ve been married since 2004).

Before we met each other, we already understood our respective cultures. I spoke Chinese, and was curious about all things China, from Tai Chi and Taoism to traditional Chinese medicine. John had studied Western culture and literature as a college English major. We were both willing to learn more — from language to culture — and willing to try and experience new ways of living.

But this alone won’t make a lasting couple. For example, I’ve known — and dated — Chinese men with similar backgrounds, who couldn’t understand me the way John could.

One reason we understand each other well is we value the same things. I started falling for John when he told me how hard he fought against the plague of stone factories in his countryside village. And I loved him even more when he said his dream was to start a “humanistic care center” (his words) in China, someday. His dreamy idealism — matched with a handsome face — still makes me swoon, even today. And these values and characteristics know no borders or nationalities; they can be universal.

Another thing that keeps us together is communication. That can be tough when you’re coming from different cultures, and at least one of you must communicate — at any time — in a second language. I have always been a communicative person, and I believe that talking things through is important when a conflict arises. That was odd for John, because he came from a family background where many things never were said, especially when it comes to feelings/emotions. Over the years, we’ve learned how to communicate with each other — John has learned how to speak out his feelings, and I’ve learned how to say more with less, and read each other, which I think many couples experience.

Humor helps to keep any couple together, especially couples like us. John and I have our own humor, based on a secret language and shared experiences that we have. Sometimes, all it takes is one word to make us erupt in laughter — even though no one else knows what we mean. And other times, we’re just silly. For example, we have a habit of chasing each other to the car, or back home. We always explode in giggles over it, as if we were elementary school children playing during recess. I think it’s our way of sharing the excitement we have of being such a close couple.

We’re also willing to compromise or simply forgive, when understanding seems to fail us. For example, I remember how I had a hard time accepting that John hated many of the Western foods I loved. In the end, I have learned to accept a predominantly Asian diet, because these are the foods we enjoy together. Anyhow, I can always have my own Western comfort foods during lunch, or as an occasional reward.

I think communication, humor compromise/forgiveness are the most important things for any cross-cultural couple, especially a Western woman with a Chinese man. Because, you will have disagreements and misunderstandings (I think about my eggplant rant, early on my relationship with John) — and barriers (language/culture) make it that much harder to work everything out. There have been times when I erupted in rage over something John did or said, or when John stonewalled me for something I did or said. But, over the years, we’ve been able to forgive, move forward and, quite often, have a good laugh over it.

And, yes, also finally agree on how to eat eggplant. 😉

Do you have a question about life, dating, marriage and family in China (or in Chinese culture)? Every Friday, I answer questions on my blog. Send me your question today.

17 Replies to “Ask the Yangxifu: How can Western women and Chinese men get along – as a couple?”