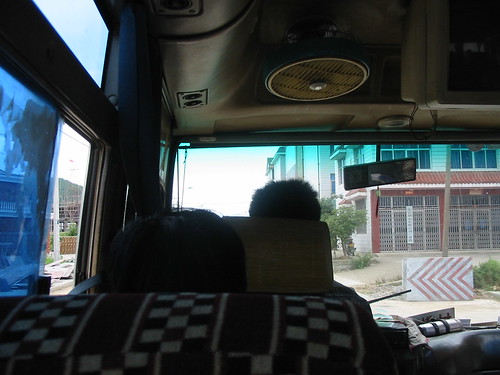 I really want to be on the new highway leading to Tonglu, John’s hometown in theÂ Chinese countryside. The smooth concrete is perfect, unblemished by potholes or cracks. Each side of the highway has a new guardrail, with newly transplanted trees beside it, propped up by four wooden supports and rope tied around the trunk. And on the highway, a bus cannot stop to pick up new passengers — it must go nonstop to its destination, so the passengers know when it will arrive. It is China’s future, right next to me.

I, however, am currently in the present on this Sunday in early September, 2002

The present is a rickety minibus on road etched with cracks and potholes — as the minibus hits them, the feeling becomes amplified through the floor and seats like a cacophonous sound in an auditorium. Everything on the bus, from the exterior to the furniture, is stained by a brown veneer, like the patina of a dirty teacup.

The bus rambles along this road next to the highway — stopping every now and then to pick up a passenger, or drop someone off — and with each passing moment, my patience rambles along towards anger.

I sit next to the windows with my arms crossed, watching out the window as the bus lurches around bicycles and pedestrians, and boldly cuts off the East Wind trucks. “I can’t stand this bus.” I lean more into the window, my eyes furrowed and angry.

John pats my arm and turns to me. “What’s the matter?”

“It’s this road. And this bus. God, this bus. I can feel every single little nick and crack in the road, as if we just crossed the Grand Canyon. And why can’t the driver stop smoking?”

John looks ahead, turning away from me, coldly. “What did you expect?”

I shrugged, my head lowered a bit. “I don’t know.”

“You know, no one is enjoying this arrangement. The owner of the highway charges ridiculous fees, so we cannot take the highway. The bus drivers are just trying to make a profit. They shouldn’t be smoking, but they’re so used to smoking that your telling them not to won’t change things. Your complaining doesn’t help anything.”

Screech. The bus stops suddenly to pick up another passenger, and I am stopped for the moment, exposed to the man I have just fallen in love with, like the rocks blasted to make way for that new highway. Deep inside of the many layers that are me, there is a sliver of an ugly American, a girl that doesn’t always understand China. That is the layer John has seen, and this is my first trip to his hometown.

What will John, my Chinese boyfriend, think of me now? I think of Frank’s words in the elevator: I can’t understand you.

I know what Frank, my ex-Chinese boyfriend, thought of me on June 8, 2002, when he came over to watch the World Cup match between Brazil and China. I had waited all week just to finally be with him, to finally be his girlfriend.

I was and was not his girlfriend at the same time, a Schroedinger-like twist of fate that I had to endure because of Frank’s warning a week ago: “If our coworkers find out about us, I could lose my job.” The company forbade any office romances, so Frank wanted us to be a secret from the world. We could only be a couple within the confines of my room, or a private venue.

So, I was with him all week in the office — but as a distant coworker, a person who faded into the background, a stranger who just happened to sit right next to him. This was my one evening to be with him as a girlfriend, a lover. I could talk to him, put my arms around him, kiss him, hold his hand. I had passed so many hours that week lost in dreams, imagining the possibilities for these few hours on Saturday.

He had just turned on the television, the match was just about to begin, and Frank was envisioning the clash that was just minutes away. “The World Cup is like a world war, every four years,” said Frank, as he sat at the edge of my bed, in front of the television.

I sat down next to Frank, and turned towards him. “Really?”

“It’s war, don’t you see it? This is the only way that countries can still battle each other. Instead of weapons, we have goals and free kicks.”

As the match began, I tried putting my arm around Frank, or holding his hand. But it wasn’t easy, because he got too excited during the match, shouting, yelling, clapping his hands.

Then, just 45 minutes after he had arrived at my apartment, Frank’s cell phone rang.

“She needs help moving her belongings to a new apartment.” It was a friend of his, and she needed Frank, right now. This was the one moment I wished he’d never had a cell phone.

“She has to do it tonight?”

It wasn’t her I didn’t understand. It was Frank. I did everything he asked me to do. I ignored him at work, as if he was just another common friend. I pushed away my feelings and my desires, even as my love sat less than a heartbeat away from me, in the desk adjacent to mine. All I had hoped was a night in return, just one night.

Frank had already returned his cup to my kitchen, and put away the fruit that he had brought over. “I’m sorry, we’ll do this next week.”

Next week. Even Schroedinger would have found this answer illogical. Two atoms attracted to one another don’t get pushed away or pushed aside so easily. But Schroedinger isn’t thinking in Chinese culture — and neither am I. I want to forget the importance of friends to a Chinese, that those bonds are important enough to even break up a date night, like an unforeseen atomic explosion. Frank didn’t want to explode the evening. But like an atom in a fission reactor, he had no choice but to explode it. And maybe it was the same for tomorrow, that he had no choice, already bonded to obligations and friends and errands. But Frank never said, and I never asked.

The real battle that night wasn’t between Brazil and China, at the World Cup. It was Frank versus me, and I lost.

I held my tears back behind desolate eyes as I kissed Frank several times before he left. Could he see that I was and was not understanding of him — of China — at the same time?

Could John? Could he leave me, just like Frank did? I didn’t know. But if it was John versus me on that bus, I was losing ground too.

Have you ever misunderstood the country you were living in? Have you been less understanding of its “shadows” or imperfections or even cultural tendencies? And has that affected your relationships?

2 Replies to “Chapter 14: The China Road of Misunderstanding”