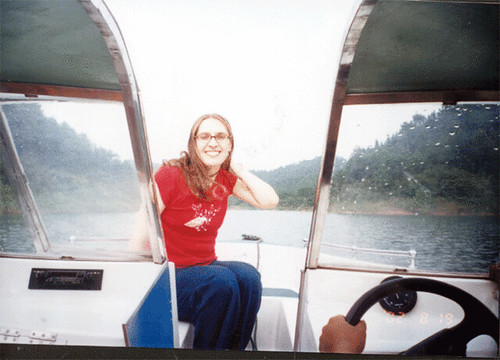 Chinese poets once praised the Xin’an River in Zhejiang Province as a mirror, so clean and clear you could see the bottom. But the Xin’an River is no more. It was dammed in 1958 to create 1,000 Island Lake, where John takes me in August 2002 to visit the country of his ancestors.

His ancestors, and all of the beauty that inspired the poets, are buried beneath 1,000 Island Lake. But we are interested in one ancestor in particular — John’s grandfather, who died in 1948, the same year John’s father was born. This grandfather never saw Communist China or 1,000 Island Lake, only knowing the clarity, the lucidity that was Xin’an River. Maybe he is lucky for that.

“I once tried to find my grandfather’s grave,” John confessed. “I rowed all around this one area, the area where he supposedly was buried. But I never found it.” Today, we hope to find his grandfather’s grave, because John, like many Chinese, still believes in ancestor worship, in the importance of the connection to his past. We only hope it isn’t lost for good.

But we are lost on the lake. This afternoon, a Sunday, we hired a small motorboat to take us around the lake. “We want to visit the less touristed areas,” John told the owner of the boat. So the owner did. After visiting a few of the more developed 1,000 islands — “bird island” and “dragon hill island” — John directs him to another area of the lake, where his grandfather’s grave might be.

The water became more shallow. “Maybe you should turn off the motor,” I told the owner of the boat. So he did. He turned it off, and let us go adrift. Next to a patch of reedy grasses in the water, and no one else but us, we float along with no certain destination or goal. We are just suspended in a state of joy, free and unencumbered. I sit at the bow of the boat and use one of the backup oars to row along. That’s what I really wanted to do in the first place — row on the lake.

I didn’t realize I’d get more than a passing chance.
We told the owner to start the boat, so we could continue looking for the grave of John’s grandfather. The motor grumbled and whirred, but didn’t start. The owner tried again, and again, and again. Nothing. John then translates the owner’s words, spoken in the local dialect: “We must row to that nearest island over there,” he says, pointing to a small dot more than 100 meters before us. Only then can we get on another boat that will take us back to Chun’an, the city by 1,000 Island Lake.

But I love it. I sit once again on the bow, jeans rolled up to my knees, my bare feet lapping at the water, with an oar in my hand, dipping and swaying, pretending that I am some tomboyish version of Huckleberry Finn, floating down the river. I haven’t felt this free in a long time

Finally, we reach the little island. “Stay here, while I go to call a boat.” The owner leaves us on a more secluded side of the island while he runs over the other to use his cell phone and locate a boat. This island is small, and quiet — with hardly anyone around. There is a demarcated beach on one side, but the water is nice even in this more isolated area. I look at the water, the mirror that poets praised centuries before, and I see John and I reflected in it. It is beautiful, but I am not satisfied yet.

“Let’s go skinny dipping.” I flash a devilish grin, and then, before I know it, John and I are tossing off our clothes, occasionally glancing behind us to make sure the boat owner and handful of swimmers will see us. We plunge into the mirror of water, burying our nakedness in the middle of this August afternoon. It is the most dangerous thing I have done yet in China. I am already exposed as a foreigner in China, then as a foreign girlfriend to a Chinese man in China, and now a naked foreign girlfriend to a Chinese man — in a public place in China, in the light of day. I could be a tabloid headline in this country if I’m not careful.

I tread water, as I flirt dangerously with John. And he swims dangerously back. “I can’t swim,” he confesses. I wonder why he never told me, but I’m not surprised. It is the allure of the mirror, and the mirror of his girlfriend, who he affectionately calls “wife”, that makes him forget his true reflection.

I forget mine, too. Sometimes, when I talk to him, I forget that there was ever a misunderstanding between Frank, my ex-Chinese boyfriend, and I, that his family wouldn’t accept a foreign girl, or that I am so different from Chinese men. I just skinny dipped with a Chinese man, the one I love, and he loves it. How much more different can we be?

I look around nervously after five minutes. “Maybe we should get out.” John nods in agreement, and we quickly leave the water and throw on our clothes with great haste. In leaving the lake, we left behind Xin’an. The “island” we stand upon is like a stationary iceberg, the only remnant of what was once a mountain. Deep below the waterline, we could follow the side of this former mountain to what once was a valley, and the town where John’s father was born and raised. But we cannot see it. We cannot see what is buried deep below the reflective surface of the lake.

I cannot see what is buried deep below in John, either. And I am not prepared for what surfaces in me when our cultures begin to collide.

Did you ever feel so blinded by love with someone from another country that you forgot the cultural gap? Did it ever move you to do something crazy?

2 Replies to “Chapter 12: What is Buried Beneath Our Hearts, and Lakes, in China”