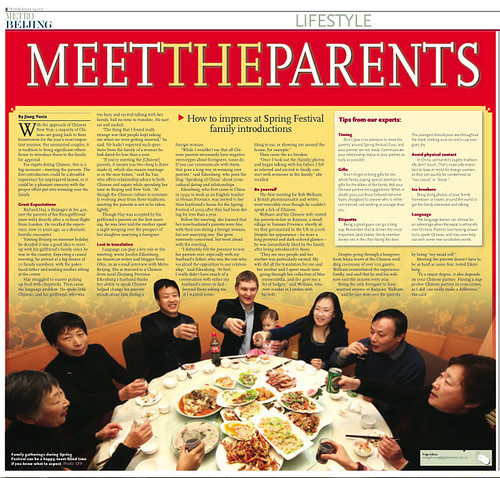 For those of you who may have missed it, I was featured in a Global Times article titled “Meet the Parents,” which shares some personal tales of meet-the-Chinese-parents experiences from foreigners (including me) and offers some advice for any foreigners heading home with their boyfriend/girlfriend to meet the parents for the first time. Here’s a snippet of the article:

Language can play a key role in the meeting, wrote Jocelyn Eikenburg, an American writer and blogger from Ohio, in an e-mail interview with Metro Beijing. She is married to a Chinese from rural Zhejiang Province. Eikenburg’s husband thinks her ability to speak Chinese helped change his parents’ minds about him dating a foreign woman.

“While I wouldn’t say that all Chinese parents necessarily have negative stereotypes about foreigners, some do. If you can communicate with them, that goes a long way in winning over parents,” said Eikenburg, who pens the blog “Speaking of China” about cross-cultural dating and relationships.

Note that there’s a mistake in the text — there is a sentence that claims my husband’s father thought it fine for us to date, but not marry (which of course sounds absurd to anyone who understands China’s dating culture, where dating is generally a pathway to marriage). It should read as follows: “Before the meeting, she learned that her now-husband’s parents were fine with their son being friends with a foreign woman, but not dating one.” In the meantime, I’ve requested the change.

You can read the full article online, or in this lovely PDF version.

The reporter who interviewed me also referenced — in e-mails passed between us —  a post I did three years ago on this subject. I feel as if my prose has grown leaps and bounds since I published it, but it still offers some helpful tips (and remains one of my top 10 popular posts).