When you’re getting ready to remember 10 years together with the person you love most in the world, you want it all to be as perfect as that diamond wedding ring. After all, isn’t 10 years of marriage called the “diamond anniversary”?

But the reality doesn’t always sparkle like that most coveted of all jewels, just as John and I discovered this past Saturday when we set out to celebrate our 10th anniversary together. Here’s how our day ended up losing some of its luster:

1. Celebrate it right smack in the middle of the hottest days of summer.

Our marriage anniversary is July 26, only three days after July 23 (also known as by the Chinese as dàshǔ or 大署, the “Greater Heat”). At this time of the year, the entire city feels like one huge sultry public sauna that you can never leave (unless you duck into an air-conditioned store or home).

As soon as John and I left our apartment, the heat and humidity enveloped us like a huge wet rag — and it wasn’t long before my brand-new fuchsia T-shirt was dotted with beads of sweat. Not an auspicious start to our celebration!

2. Arrive at the West Lake just as a huge thunderstorm descends upon the city.

After indulging in a little pampering at a local hair salon (a up-do) and a makeup shop (where a pro did my makeup for the day) John whisked me off to the most romantic locale in all of Hangzhou: the West Lake. Our goal? To visit the very bench on Su Causeway where we had our first kiss on July 26 in 2002.

But not long after we reached the scenic shores of the lake, fringed with the rich green patches of lotus plants studded with pale pink flowers, an ominous gray cloud darkened the sky. Thunder soon rumbled right in, followed lightning and a monumental downpour. When I say “monumental downpour”, I mean 90 mm worth of rain (that’s a little over 3.5 inches) in one hour!

We sought shelter just in time in a public teahouse beside the lake, and were trapped there for almost an hour, witnessing nature’s own version of fireworks boom across the lake (I screamed when the lightning hit a nearby tree) as the landscape around us became soaked in rain.

Then, because we needed to hustle to make our 6pm dinner reservation at a hotel, we splashed our way down Beishan Road through the runoff water that burst up from the drains beside the road and cascaded over the sidewalk right into the West Lake. It reminded me of all those times when I was a kid and insisted on going creek-walking — except you don’t usually go creek-walking with your hair and makeup done, all dolled up in your new shirt and long black skirt.

Even worse — the rain revealed leaks in my own umbrella, scattering droplets of rain all over me (including more than a few that conspired to ruin my nice up-do and makeup…thank goodness they didn’t!).

You might wonder, “Why didn’t they just flag down a taxi or take the bus?” Well, as anyone who has ever lived in Hangzhou knows, it’s almost impossible to flag down a taxi on rainy days. Plus, the traffic on Beishan Road was locked in gridlock and plodded along so slow we actually walked faster than the buses themselves!

3. Due to a downpour of seemingly Biblical proportions, walk into the five-star hotel where you’re going to have dinner with at least half of your outfit completely soaked

There’s nothing that says class quite like strolling into the glittering lobby of a five-star hotel looking as if you crawled out of one of the drainage pipes beside the West Lake. The Assistant Manager on duty — a willowy blonde dressed in a perfectly-pressed suit jacket and pencil skirt — stared at us as we hurried across the lobby and up the stairs, and I couldn’t tell whether it was because we were that rare AMWF couple in China or because our shoes left little puddles behind us wherever we walked.

4. Due to same downpour, spend over an hour awaiting the rest of your friends to arrive.

Four of our guests — more than half of our table — took over an hour to make it to the hotel because the downpour brought Hangzhou’s traffic to a screeching halt. This photo (with me putting on a smile while my friend Caroline plays with her mobile phone) pretty much sums up how we spent that hour at a very empty table for seven.

5. Realize it’s the most imperfect anniversary celebration you’ve ever had — and enjoy yourselves regardless. 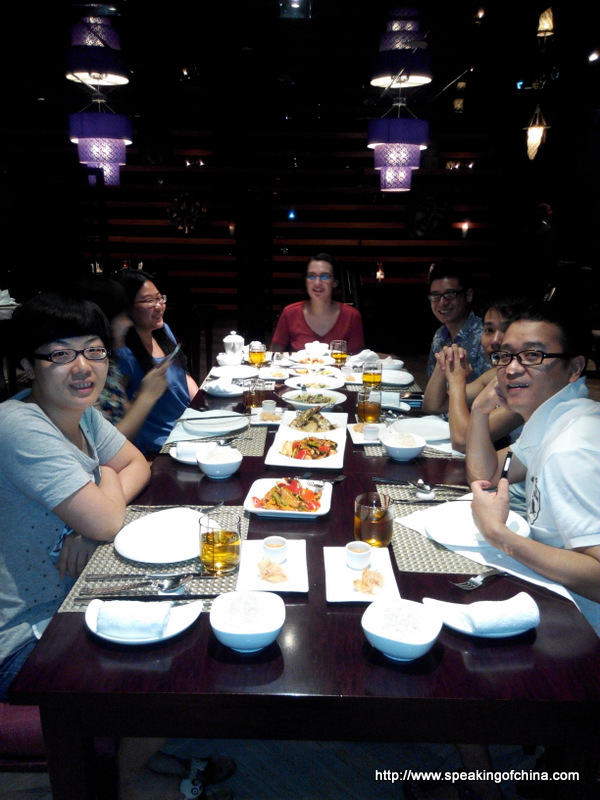 Between the sweltering heat and all of the mayhem caused by a sudden downpour, we had one tumultuous afternoon. No carefree strolling beside the lake, no stolen kisses at our old bench on Su Causeway, no confident entrance into the hotel. Our shoes were still totally wet and squishy. The rain even drenched a classic photo of us that John carried in his wallet.

But we had five of our friends with us, as we dined on some of the most sumptuous Thai dishes I’ve ever sampled in my life in one of the most glamorous restaurants in town. Maybe we didn’t get the perfect day we hoped for — but as I helped myself to another creamy mouthful of green curry vegetables and admired the mahogany-toned wooden accents in the space, I couldn’t help but think that, for the moment, it was just perfect enough.

(P.S.: For those of you curious as to where we had our anniversary dinner, it was at the lovely  Sawasdee Thai Restaurant in Hangzhou — one of my favorite dining spots in the city.)

Have you ever experienced a less-than-perfect celebration?