I’m excited to run this guest post from Grace Mineta of the fantastic blog Texan in Tokyo (if you haven’t discovered her insightful and entertaining blog yet, you’re missing out). Grace just successfully funded a kickstarter project for her book “My Japanese Husband Thinks I’m Crazy: The Comic Book” in only three days!

Today she reflects on something that many of us know all too well, but are often afraid to write about (myself included) — the dark side of moving across the world for someone you love.

Interracial relationships are complicated. So are intercultural relationships. I don’t think I fully understood the complexity until I entered my own – and it’s a bit difficult trying to explain to other American friends with absolutely no knowledge of Asian culture why no, we can’t just “put my husband’s parents in an old-folks home once they lose mobility.”

Or when my husband has to try to explain to his coworkers that “no, my wife probably will not quit her job when she gets pregnant. She loves working. I might transition to part-time work and be a stay-at-home dad instead.”

You see, as wonderful, exciting, and educational an intercultural relationship is, there is also a deep, dark side to moving across the world, for the sake of love. It can be isolating. You have to compromise about subjects you didn’t even think were ‘on the table,’ so to speak. You will both make mistakes.

After reading Susan’s recent memoir “The Good Chinese Wife,” I decided I wanted to write a guest post for Speaking of China about the dark side to moving across the world for love.

And, of course, if you’re really interested in daily life in Japan as a foreigner, you should check out my book “My Japanese Husband Thinks I’m Crazy: The Comic Book.”

It is an autobiographical memoir about my life as a white, Texan freelancer married to a Japanese businessman, living in Tokyo. It covers intercultural and interracial relationships, in a funny, light-hearted way.

Enough of the good, let’s talk about bad.

Here are the top 6 elements that make up the “dark side” of moving across the world for love:

1. You can become almost pathetically dependent on your spouse

My husband and I have lived in both Japan and Texas, with a vast majority of our time spent in Tokyo. We spent two months in America together before the wedding, and another month and a half in Texas after the wedding.

We had a wonderful time, but we also had some problems. Ryosuke couldn’t drive a car in America. He was completely dependent on me and, on days when I had a freelance project due, he was left walking my sister’s dog, Bo, around the neighborhood for hours, since he had nowhere else to go.

Thankfully, in Tokyo I can get anywhere by train/bus. However, there are times, like when I’m trying to open a bank account, file a health insurance form, or figure out some obscure Japanese law when I am completely dependent on my husband.

I’m lucky that I have my own job and can speak Japanese pretty fluently… but even so, I still get frustrated.

2. Visas, bureaucracy, and a lot of red tape

I went to the immigration office seven times to get a visa. Seven times. My visa was rejected for all sorts of stupid and illogical reasons (Not enough time left on my tourist visa, one form was improperly dated, the visa I was applying for didn’t exist, “waiting to apply for a spouse visa” was not a valid reason to extend my current tourist visa… the list goes on).

One incredibly unhelpful lady at the Tachikawa immigration office told me “Go back to America, wait a couple of months, and apply for a visa there.” When I told her I couldn’t afford to just ‘go back to America,’ she suggested I go to Korea instead (since it’s “cheaper”) and then called up the next person in line.

Now I have a valid, working visa in Japan.

However, I know other women who are not able to work on their spousal visas in their husband’s countries… and it’s hard.

3. Finding a good career “in your field” is incredibly difficult

I love writing, but I never wanted to be a writer. I wanted to work for local government. Or at an NGO.

Unfortunately, it is incredibly difficult to find a job in my field in Japan. I either don’t have enough experience, can’t make the proper time commitment, can’t speak Japanese well enough, or can’t afford to commit to 40 hours of work (unpaid, no stipend for food/travel) for at least 16 months at my dream NGO.

Hence the reason I am a freelance writer, blogger, and English teacher.

I don’t love the work, but it pays the bills and gives me something to do. In my spare time, I get to blog, draw comics, and volunteer at a local orphanage.

I can’t count the number of women I know who moved abroad with their husband, expecting to find a career in their field in a couple of months… only to wind up frustrated, disappointed, and underemployed.

On one of our larger fights a couple months ago, I asked my husband why he didn’t just marry a nice Japanese girl. “She would be able to talk to your family without any problems,” I told him, “and she would be better at housework (or, like, actually agree to do housework. I’ve met so many Japanese girls who love cleaning. I hate it. Ugh.)”

“I don’t want to marry a ‘Japanese girl!'” he shouted back. “Or an ‘American girl!’ I just want to be married to you!”

A lot of our friends are Japanese. When we have house parties or go on double dates, I often find myself toning out what the other people are saying. Speaking in Japanese all day makes my head hurt… and I start to feel out of depth.

When nearly all of our friend’s wives quit their jobs after marriage, clean the house every day, wake up early in the morning to cook their husband breakfast, do laundry every day, and always keep the house presentable, clean, and well-stocked with food, it’s hard not to get insecure.

I still stand by everything I wrote in my last guest post on Speaking of China, “7 of the Best Things about Being Married to a Non-Native English Speaker.”

And thankfully, my husband doesn’t expect me to be a “Good Japanese Wife.” If he did… well, I would probably go crazy. And we would yell at each other more.

5. You might have to re-evaluate your priorities and compromise on some tough issues

This one is pretty self-explanatory.

Just remember that arguments are an essential part of any healthy relationship and they provide a great way to broaden your horizons and re-evaluate your priorities.

6. You will be isolated

When we first moved back to Tokyo, we spent the first couple months living with his parents in Ibaraki, an incredibly rural prefecture next to Tokyo.

In the first couple months I had no job (I was still battling the immigration office), no English speaking friends, and no connection to the ‘outside world.’

I fell into a deep, dark depression that lasted for several months. I cried a lot. I started losing weight (not in the good way). I watched my friends from college go off and get amazing jobs… and just felt worse about myself.

Then we moved out. We saved enough to get out own place, in central Tokyo. I got a visa and picked up a couple part-time jobs. I made a bunch of new friends. 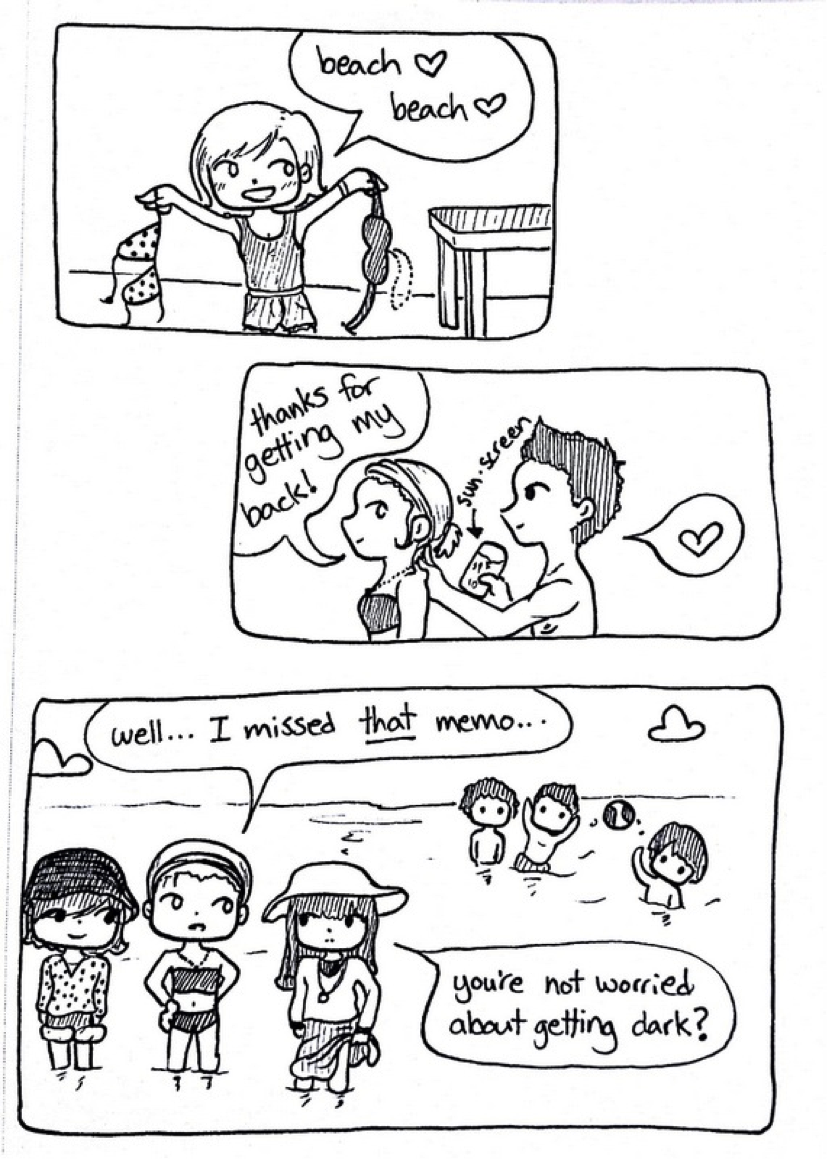 I still had cultural problems from time-to-time, but instead of being a sad reminder of how “foreign” I was, they started being kind of funny.

I wrote a comic book, “My Japanese Husband Thinks I’m Crazy,” that ended up being wildly successful.

I have a ‘sort of’ career now.

Of course, I still feel isolated from time-to-time. But I’m learning how to deal with it.

Grace Buchele Mineta is a native Texan, founder of the blog “Texan in Tokyo,” and author of the autobiographical comic book, “My Japanese Husband Thinks I’m Crazy.” She lives in Tokyo with her husband, Ryosuke, where she blogs and draws comics about their daily life.

“My Japanese Husband Thinks I’m Crazy: The Comic Book” is the autobiographical misadventures of a native Texan freelancer and her Japanese “salaryman” husband – in comic book form. From earthquakes and crowded trains, to hilarious cultural faux pas, this comic explores the joys of living and working abroad, intercultural marriages, and trying to make a decent pot roast on Thanksgiving.

35 Replies to “Guest Post: The “Dark Side” to Moving Across the World for Love”