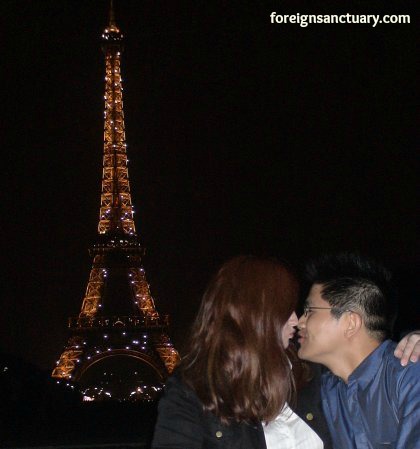 Sometimes, when I think about how I grew up in a very average, very white, very Midwestern suburb in the US, never dreaming that I would eventually find my future husband and a totally new life in China, it blows my mind that here I am in Hangzhou. And yet, at the same time I firmly believe (like many of my husband’s friends) that destiny had a role — that somehow, this was all meant to be.

That’s why I love this guest post from Constance, who blogs at Foreign Sanctuary and writes today about how her unlikely journey to Taiwan (where she met her Taiwanese husband) was anything but an accident. (Enjoy the striking photos as well, a delightful sampling of Constance’s own photography.)

Do you have a story you’d love to see featured here on Speaking of China? To learn how, visit the submit a post page for details.
—–

If someone had to tell me twenty years ago that I would be living in Taiwan and married to a Taiwanese man, I would have laughed in their face and then, well, I would have probably grabbed my atlas, turned to Asia, and then tried to find the location of where most of my childhood toys were made. Yes, that was probably the extent of my knowledge of Taiwan when I was little – a far away place where people hammered and sewed and assembled the toys that I played with and then stamped ‘Made in Taiwan’ somewhere on the box or toy.

Fast forward to now and I am a firm believer that everything happens for a reason. If it wasn’t for that casual conversation with friends over a glass (or two) of wine one cold night in January of 1999, I would have never considered teaching in Asia.The thought never, ever crossed my mind until that point in time.

My fortitude and tenacity was tested to the max when it took me nearly an entire week to get to Taiwan, a nightmare that I recently relived while writing my book. I thought about giving up on my dream to move to Asia so many times that week and if it wasn’t for my recruiter, who gave me the extra reassurance that everything was going to be OK, I probably would be in living and working somewhere in Canada right now.

My thirst for adventure and for experiencing new things led me to sign a third contract at the school where I worked at, which extended my time in Taiwan for one more year. And if it wasn’t for that, I wouldn’t have been out celebrating with a group of friends the night my husband literally danced into my life. However, if it wasn’t for his quick thinking and cleverness, he would have not gotten my number that night and we would not be together right now.

Four years later, my husband and I decided to get married. I always knew he was one (nearly) right from the beginning. We shared the same interests such as travel, we had so much fun together, and he always gave me ‘that feeling’ which never dwindled with time. When the newness of the relationship wore off, the feeling of ‘puppy love’ was still there. I was and still am a better person because of him. He is an optimist who dares me to take chances and to dream bigger. I am a realist who keeps him grounded (with regards to certain things). We complement each other. We are better people because of our relationship and each other. We may have grown up on different sides of the world but that makes life interesting.

On June 10, 2005, four years to the exact date that we met, we got married at the court.According to the lunar calendar, it was a perfect day. Probably too perfect! It was definitely a wedding to remember, all for the wrong reasons. Luckily, we had our Canadian church wedding and reception a few months later which was perfect – well, except for me putting the ring on the wrong finger. Plus, we had our reception in Taiwan where we celebrated with our closest friends.

Then, we come to the house which we actually purchased three months prior to completion. If it wasn’t for a series of events, this house that we bought over five year ago wouldn’t have been ours. It was the first house we looked at. My husband knew it was the one but I wanted to look at more. It was actually purchased by our neighbor who opted to buy another one. And if it wasn’t been for the poor state of the economy at the time, it would have been sold immediately at a higher price. The house was meant to be ours.

Which brings me to now! If it wasn’t for that heartbreaking news that shook me to the core and tested my hope and strength two years ago this month, but had a happy ending, I wouldn’t be the person I am today. That incident reminds me each and every day of all the good in my life and to appreciate the now, the present!

That is why I am a firm believer that everything happens for a reason.

Constance is a Canadian expat who currently calls Taiwan home. She blogs about her travel experiences as well as her personal reflections about expat and married life on her blog, Foreign Sanctuary. Photography is one of her passions and she shares photos from her [Photographing 2015] project daily on her Facebook page. She is also an aspiring writer with a memoir in the works.
—–

35 Replies to “Guest Post: Everything Happens For A Reason (Even Finding Love + A New Life in Taiwan)”