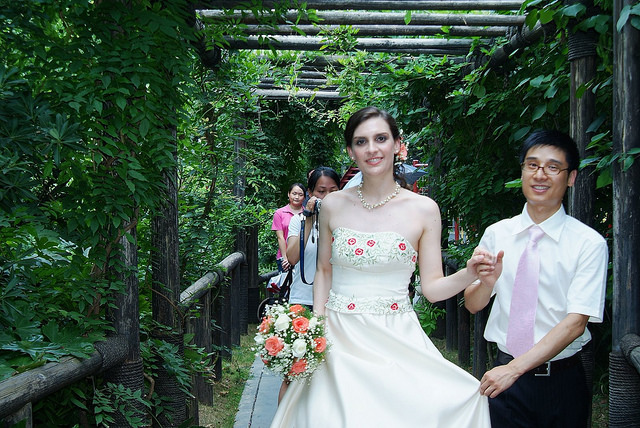 A few years back, Fred shared his inspiring story of how he found the love of his life in Brazil. But last year, he really stirred up the conversation about interracial dating in China when he reported his experience in trying to set up his Chinese nephew with American women (to date, the post has generated 196 comments!).

Well, Fred returned to Hong Kong earlier this month and decided to do an informal “study” so to speak. Specifically, he wanted to know whether interracial couples of Asian men and Western women were really as rare as I had written before. Keep in mind that this is not a scientific sampling by any means — it was simply one person’s observations during a vacation in the city.

So what’s the verdict on interracial dating between Asian men and Western women in Hong Kong? Read on to find out! And thanks so much to Fred for filing this report! 😉

When I first sought to date Western women over 14 years ago, I found that it was often a lonely experience because I rarely encountered couples of Asian men and Western women (hereinafter “AM/WW”). I could not consult with anyone except my full brother who himself was married to a White woman and so I had tremendous difficulties bouncing ideas between couples of my equal.

On the other hand, I saw plenty of couples of Western men and Asian women (hereinafter “WM/AW”) like my younger sister and her husband. Often times, I did not find the advice useful or applicable when I consulted with WM/AW couples.

After I chose to marry a White Brazilian woman, two primary questions still remained in my mind:

I found Jocelyn’s website and read On the Rarity of Foreign Women and Chinese Boyfriends/Chinese Husbands in China. I felt she did an excellent job explaining why AM/WW pairings are so rare. Among the reasons that she gave were stereotypes held by Chinese men against Western women and by Western women against Chinese men, the media (i.e. portraying Asian male as asexual and lacking masculinity), Western perceptions of the relative physical size of a certain intimate part of Chinese men that makes it unattractive to Western women, etc.

However, there are no statistics on the number of WM/AW versus AM/WW pairings. There were some statistics I read once from the Shanghai Marriage Bureau showing the number of marriages between Chinese men and foreign wives compared to Chinese women and foreign men. However, they did not account for the couples that are not married and dating but nevertheless still a couple.

Jocelyn wrote in her article that it was not uncommon to see an expat walking hand-in-hand with a Chinese (or other ethnically Asian) girl. But neither Jocelyn nor any source told me the numbers. So, I decided to investigate the matter further. In order to answer question number 2 above, I decided to take the matter into my very own hands. I was also curious to see if Jocelyn was really right when she averred that AM/WW pairings are rare. I wanted to prove or disprove her article.

So, I decided to take the matter into my own hands and do my very own personal investigation. My White Western wife and I, along with my two children, were heading to Hong Kong between April 2, 2014 and April 12, 2014 for a brief vacation to visit my half brother and half sister and their families and to do some sightseeing. So I made it a top priority during that trip to use my very own eyes to count how many WM/AW couples we saw compared to AM/WW couples. Every day I brought a sheet of paper and a pen with me, and I drew a vertical line in the middle. On the left side of the paper I wrote the heading “WM/AW Team” and on the right side I wrote the heading  “AM/WW Team”. Then every time I saw either a WM/AW couple and/or AM/WW couple, I would mark a vertical stroke on the corresponding side of the paper. On the fifth stroke, I would mark it as a horizontal stroke. I would continue counting this way until my return to the US. This would be like a game for me; it started when I first entered the plane in the Los Angeles International Airport and would end when I returned to LAX International.

(Please note that my personal study is by no means scientific as it is not done by random sampling or any type of representative sampling method. It was purely my personal daily observation not predicated on any scientific basis whatsoever.)

My team was “AM/WW” and when I entered the airplane on April 2, 2014 en route to Hong Kong I wrote a stroke on the right side of the paper (i.e., one point for AM/WW team) as my wife and I constituted a AM/WW couple. So, our team was immediately leading the game by one point versus zero for the WM/AW team. “Hurray for us!” I said to myself filled with confidence that our numbers may not be so rare after all, contrary to what Jocelyn wrote.

Well, guess what? My team’s lead was very short lived.

No sooner after landing at the Hong Kong International Airport, the other team WM/AW immediately scored 3 points and now the score was 3 to 1. As time passed between April 2, 2014 and April 12, 2014 the score was skewed more and more in favor of the WM/AW team. In fact, when I visited my half-brother and his side of the family, I had discovered that on his side of the family his youngest of the two daughters is engaged to a White European man (Arnold) from France, and they are both living and working in Hong Kong. Furthermore, Arnold’s father, another White man from France, divorced his French wife many years ago, moved to Hong Kong, and now is dating and living with an Asian woman in Hong Kong. It seemed that the WM/AW pairings are incredibly ubiquitous, just as Jocelyn wrote. Well, all of my hopes of winning the game were dashed.

We lost the game quite badly.

I guess Jocelyn was ultimately right when she wrote On the Rarity of Foreign Women and Chinese Boyfriends/Chinese Husbands. Couples of Asian men and Western women really are rare.

P.S.: Please note that Hong Kong is considered quite Westernized. If the AM/WW couples are so rare in Hong Kong, I can only imagine how rare they must be if we conducted this study in mainland Chinese cities such as Guangzhou, Shanghai and Beijing.

Do you have a “field report”, guest post, or even love story about Asian men and Western women that’s worth sharing? Submit yours today!

204 Replies to “Are interracial couples of Asian men & Western women really that rare? A field report from Hong Kong”